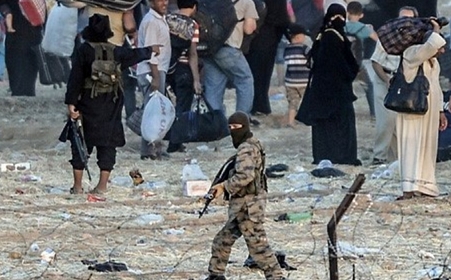 Turkish border guards have reportedly shot dead eight Syrians, most of them women and children, who were attempting to flee violence in their conflict-stricken country.

The Syrian refugees were killed while trying to cross into Turkey via a mountain smuggling route at the western end of the border on Sunday, according to a Wednesday report by the British daily The Times.

A member of the group told the daily that they had been trying to make the journey into Turkey for several days, but had come under Turkish fire every day. Many others are said to have been injured in the assault.

A Mobile phone footage obtained by The Times purportedly shows a man who was shot in both of his legs while carrying his young son. The father is seen turning back down the mountain path in search of medical help.

Abdmunem Kashkash, a lawyer who was with the group but managed to cross into Turkey unharmed, said Turkish border guards are “killing unarmed people” on a daily basis.

“There was one little girl who was shot and we could not do more for her for four hours, until nightfall. An old man and woman are missing — they have probably been killed too,” the lawyer added.

Those injured by the Turkish guards were taken to a hospital in Azaz, Syria, a border town that is sheltering 100,000 displaced Syrians.

That border crossing has been closed for most of the year as the Takfiri Daesh (ISIS / ISIL) terrorist group is closing in on the town from the east. The Turkish government has declined to respond to calls from aid agencies to open the border gate.

The deadly encounter comes as Ankara says its open-door policy at the border remains unchanged, and is open to all Syrians whose lives are in imminent danger.
Over the past three months, displaced Syrians who tried to seek refuge in Turkey have repeatedly been pushed back at the border and into insecure border camps in the area.

On April 14, Human Rights Watch called on Turkey to stop shooting at Syrian refugees and allow them to cross the Turkish border to seek protection.

As of early April, Turkey had completed a third of a 911 kilometer rocket-resistant concrete wall along its border with Syria.

On Wednesday, the United Nations expressed deep worry over the fate of more than 40,000 Syrians who have fled fighting near the northern city of Aleppo on the Turkish border.

Turkey has closed the frontier to all. The medical charity Medecins Sans Frontiers said there were now more than 100,000 people trapped on the Syrian side of the Turkish border.

It said 35,000 have fled in the past week from camps that had been taken over by Daesh terrorists or had become too close to the front line.

The UN began on Wednesday evacuating hundreds of people from besieged Syrian towns as a weeks-long ceasefire and UN-led talks between the opposition and government essentially broke down.

Dozens of men, women and children needing medical attention were evacuated from militant-held Zabadani and Madaya near the capital Damascus, and the government-held towns of Fuaa and Kafraya in northwest Idlib Province.

“Plans are underway to evacuate some 500 people including the sick, wounded and their family members in urgent need of life-saving medical attention,” said UN spokesman Stephane Dujarric.

Leaders of the Saudi-backed Syrian opposition High Negotiations Committee (HNC) on Tuesday left the latest round of peace talks.

Syria has been gripped by a foreign-backed militancy since March 2011. The conflict has left over 470,000 people dead since it began in March 2011, according to a February report by the Syrian Center for Policy Research.

The tally represents a dramatic increase from the 270,000 fatalities reported by the so-called Syrian Observatory for Human Rights, which stopped independently counting Syria’s death toll early in 2014, Press TV reported.