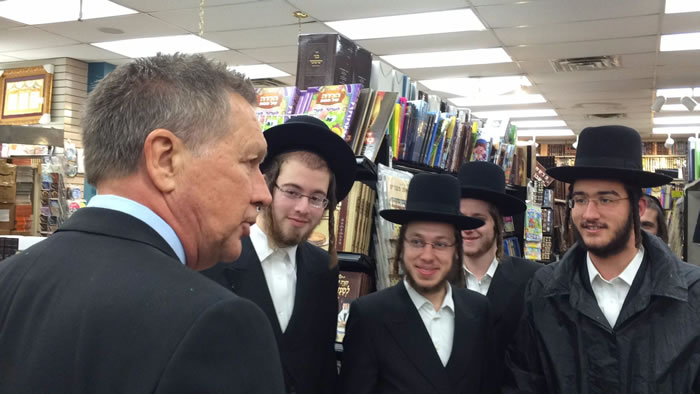 Here we see John Kasich on his campaign swing through Brooklyn, stopping off in a Jewish bookstore to make nice-nice with the locals. Trying drum up votes, Kasich expounds at length upon the story of Joseph, presumably seeking to electrify his listeners with his vast knowledge of the Old Testament.

This was on the same campaign swing through Brooklyn in which the presidential candidate presumed to inform a Jewish audience outside a matzah bakery about the significance of the Passover holiday. “It’s a wonderful, wonderful holiday for our friends in the Jewish community–the Passover,” Kasich said. He added: “The great link between the blood that was put above the lamp posts–the blood of the lamb–as Jesus Christ is known as the lamb of God.” The comment, as you may imagine, got picked up by a number of comedians, among them Stephen Colbert.

But let’s return our attention to the video above. Wandering through the bookstore, Kasich runs across a group of yeshiva students decked out garishly in Hasidic attire. Pausing to greet them, he asks what they do, learning in the process that they are students, and then proceeds to inquire what they are studying.

“Okay, but what are you learning right now?” asks Kasich.

The students, some of them grinning, seem a little reluctant to give him an answer.

Poor John Kasich. Apparently he is unaware that the Talmud depicts Jesus Christ boiling in excrement.

He obviously also believes he is having a conversation with a group of open-minded, tolerant folk who respect people of all religious faiths. Presumably he’s unaware of Talmudic teachings that it’s okay for Jews to steal from Gentiles, that Gentiles are subhuman, or that Jews are allowed to have sex with three-year-old girls (or specifically three years “and a day.”)

The Talmud is to this day the circulating heart’s blood of the Jewish religion. Whatever laws, customs or ceremonies we observe — whether we are Orthodox, Conservative, Reform or merely spasmodic sentimentalists — we follow the Talmud. It is our common law.

Meanwhile, Kasich takes pains to try and ensure that Joseph, the Old Testament character who wore the “coat of many colors,” is given proper respect by his Jewish “friends” in Brooklyn.