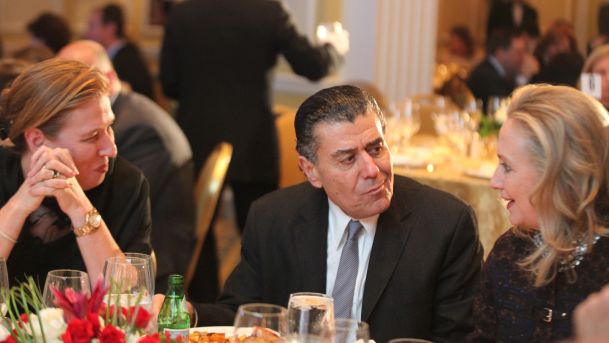 An accomplished businessman primarily involved with business interests pertaining to financial services, entertainment, and media, and an estimated net worth of $3 billion, he is ranked by Forbes as the 143rd richest person in America.

Saban is the founder of Saban Entertainment, producer and distributor of children’s television programs in the US such as Power Rangers. He headed up consortiums which purchased the broadcasters ProSiebenSat.1 Media and Univision Communications. He is a major donor to the US Democratic Party and active in pro-Israel political efforts in the US.

Saban was born to a Jewish family in Alexandria, Egypt, in 1944. In 1956, the Saban family immigrated to Israel along with most of the Egyptian Jewish community.

Saban was sent to a Youth Aliyah boarding school. Expelled for being a troublemaker, he enrolled in a night school where the principal told him: “You’re not cut out for academic studies; you’re cut out for making money.”

Saban is married to Cheryl Lynn (Flor) Saban, with whom he has two children. He also has two stepchildren, Tifany and Heidi Lenhart. He resides in Beverly Hills, California.

Saban started his career in 1966 as a bass player and manager with the rock band The Lions of Judah (Ha’arayot).

In 1969, Dave Watts from the British band The Tornados joined The Lions. That year, the band traveled to England, performed in night clubs in London and was signed up by Polydor Records.

In July 1969, the band appeared on the BBC TV programme Colour Me Pop. The Lions recorded a single, “Our Love’s A Growing Thing”, but it was not released in the UK due to financial difficulties. The band returned to Israel and Saban focused on being a music promoter.

In the early 1970s, Saban moved to France where he worked as a music producer. His clients included Noam Kaniel, Mike Brant and Shuki & Aviva. He also launched a record company with Shuki Levy.

In 1978 and 1982, Saban used the pseudonym Kussa for music/lyrics writing credits on four records for which he also served as producer using his real name. Since then, he has frequently used the name Kussa Mahchi for his composing credits on Saban Entertainment productions, including the Mighty Morphin Power Rangers: The Movie theme song.

In the United States, he became a television producer, founding Saban Entertainment in 1988.[13] During that time, Haim Saban and partner Shuki Levy became known for soundtrack compositions for children’s television programs of the 1980s. Although Levy and Saban composed for their own properties (such as Kidd Video and Maple Town), they scored for other production companies as well (such as Inspector Gadget, The Mysterious Cities of Gold, M.A.S.K., Dinosaucers, Dragon Quest, He-Man and the Masters of the Universe, She-Ra: Princess of Power, and Jayce and the Wheeled Warriors).

In 1998, The Hollywood Reporter reported that he did not actually compose all the music (totalling 3,700 works in 2008) he is credited for; ten composers threatened to sue and Saban settled out of court.

In the 1990s, Saban’s company became best known for the production of Power Rangers, Masked Rider, VR Troopers and Big Bad Beetleborgs, which were Western adaptations of Japanese tokusatsu shows.

Hillary Clinton To Hold Fundraiser in Tel Aviv May 17

On July 23, 2001, Saban announced that he and News Corporation would sell Fox Family Worldwide Inc for $5.3 billion to The Walt Disney Company. and on October 24, 2001, the sale was completed and the network was renamed ABC Family. Saban profited about $1.6 billion from this sale.

In August 2003, Saban led a consortium, which acquired a controlling stake in the straggling ProSiebenSat.1 Media group from the Kirch Media Group, the then-bankrupt German media conglomerate.

In March 2007, Saban Capital Group and the consortium sold its controlling interest in ProSiebenSat.1 to KKR and Permira, for 22.40 euros a share after originally paying 7.5 euros per share in 2003.

On June 27, 2006, Saban Capital Group led a group of investors bidding for Univision Communications, the largest Spanish-language media company in the United States.

Other investors in the Saban-led group were Texas Pacific Group of Fort Worth, Texas and Thomas H. Lee Partners. The group was successful in acquiring Univision with a bid valued at $13.7 billion (USD).

Saban says his greatest concern is to protect Israel. At a conference in Israel, Saban described his formula. His three ways to influence American politics were: make donations to political parties, establish think tanks, and control media outlets.

Saban became involved in politics in the mid-1990s when he felt that support for Israel was slipping in the United States. He says his views have shifted over the years: “I used to be a real leftist. I remember Arik Sharon [the leader of Israel’s right-wing Likud Party] coming here, to my house, a few months before Camp David, when he was still leader of the opposition. He told me there would be no deal because [Yassir] Arafat would not sign. I told myself that there was nothing to be done – these right-wingers were simply insane. I had no doubt that there would be a deal and the problems would be resolved. History proved that Sharon was right and I was wrong. In matters relating to security, that moved me to the right. Very far to the right…When there is a terrorist attack, I am [Avigdor] Lieberman. Sometimes to the right of Lieberman. For two days I really love Lieberman. But afterward I come back to reality. Look, I don’t see a solution today.”

Saban has been a generous and consistent donor to the United States Democratic Party according to his mandatory Federal Election Commission filings. Mother Jones, in an analysis of the major donors to the campaigns of 1998 election cycle, ranked Saban 155th among individual donors. Amy Paris noted that Saban’s Clinton-era “generosity did not go unrewarded. During the Clinton administration, the entertainment executive served on the President’s Export Council, advising the White House on trade issues.” The New York Times reported that Haim and his wife “slept in the White House several times during President Clinton’s two terms.” Saban remains close friends with the former President. Clinton described Saban as a “very good friend and supporter.” Saban contributed between $5 million to $10 million to the William J. Clinton Foundation.

During the 2000 presidential election, Saban increased his rank to 5th among individual donors with a combined contribution of $1,250,500. Matthew Yglesias wrote that “Saban was the largest overall contributor to the Democratic National Committee during the 2001–2002 cycle.”  Saban’s donations during that 2001–2002 period exceeded $10 million, the largest donation the DNC has received from a single source up to that time.

In September 2004, Hillary Clinton described Saban as a very good friend, supporter and adviser: “I am grateful for his commitment to Israel, to a just and lasting peace in the Middle East and to my foundation’s work, particularly on reconciliation issues.”

In May 2007, Haim publicly declared his support for Clinton in 2008 presidential election.

In June 2007, Saban and Steven Spielberg co-hosted a Hillary Clinton fundraiser at the house of Peter Chernin, the President of News Corporation.[According to the Los Angeles Times, the fundraiser brought in over $850,000.

In March 2008, Saban was among a group of major Jewish donors to sign a letter to Democratic Party house leader Nancy Pelosi warning her to “keep out of the Democratic presidential primaries.”The donors, who “were strong supporters of Sen. Hillary Rodham Clinton presidential campaign”, “were incensed by a March 16 interview in which Pelosi said that party ‘superdelegates‘ should heed the will of the majority in selecting a candidate.”The letter to Pelosi stated the donors “have been strong supporters of the DCCC” and implied, according to The Jewish Telegraphic Agency, that Pelosi could lose their financial support in important upcoming congressional elections.

On May 19, 2008, it was reported that Haim Saban had “offered $1 million to the Young Democrats of America during a phone conversation in which he also pressed for the organization’s two uncommitted superdelegates to endorse Hillary Clinton as the Democratic nominee for president.”

Saban has also made donations to members of the Republican Party including a 2003 contribution to George W. Bush‘s 2004 re-election campaign.

Haim Saban discussed his views on the Middle East and Persian Gulf region in great detail in a 2006 interview with Haaretz. Particularly notable were his comments regarding Iran: “When I see Ahmadinejad, I see Hitler. They speak the same language. His motivation is also clear: the return of the Mahdi is a supreme goal. And for a religious person of deep self-persuasion, that supreme goal is worth the liquidation of five and a half million Jews. We cannot allow ourselves that. Nuclear weapons in the hands of a religious leadership that is convinced that the annihilation of Israel will bring about the emergence of a new Muslim caliphate? Israel cannot allow that. This is no game. It’s truly an existential danger.”

Saban sponsors the American-Israel Public Affairs Committee’s Saban National Political Leadership Training Seminar, a series of semiannual seminars in Washington to provide college student activists for three days of intensive pro-Israel advocacy training.[31] The seminars provide up to 300 students from a hundred campuses with training in order to “prepare for challenges and opportunities on their campuses and [the students] left Washington prepared to mobilize for legislative and electoral impact during the next school year and into campaign ’08.”Among the prominent figures to have addressed the seminars are Senator Evan Bayh and Congressman Mark Kirk and academics David Makovsky, Robert Satloff and Dennis Ross.

Regarding Jane Harman AIPAC Controversy, in April 2009, New York Times, quoting anonymous sources, said a caller promised her that Saban would withhold campaign contributions to Representative Nancy Pelosi if she did not select Ms. Harman for the intelligence post.”

In 2007, Saban donated $14 million to complete the children’s hospital at Soroka Medical Center.

Saban, a long-time supporter and donor of many pro-Jewish and Israel causes, has stated his main goal in multiple interviews: “I’m a one-issue guy, and my issue is Israel.”