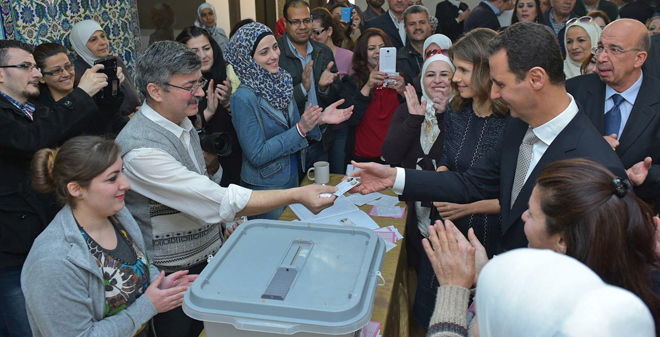 [ Note: This was submitted a week ago, so an update is needed. As expected, Western media ignored the Syrian election, knowing that the opposition would be boycotting it to avoid being publicly crushed if it had attended. That holding the elections now was in line with the constitution did not seem to rate a mention in the MSM coverage.

Assad obviously was not going to pass up showing how many voters he could get to the polls. Despite what the West may spin to pooh-pooh the election results, that is confirmation of Assad’s political support, and makes the claims that “Assad must go” a rant for political convenience only.

If the West and its Gulf State terrorist buddies were so sure that they have enough Syrian support to defeat Assad, then they would proceed with the process to hold the presidential elections faster and let the voters kick him out. They know they don’t, so the game now is to stall to find some way to wiggle him out anyway.

We already see that the ceasefire has been abused by Turkey and Saudi Arabia to rearm and reinforce their Jihadi proxies to continue an attrition war.

The Syrian FM stated Turkey has moved 5000 troops in, which has to have included all the supplies and weapons for them to go on the offensive. The reduced Russian airpower obviously contributed to not being able to stop it.

The battle will now focus on NE Syria, where it must be won or it will go on forever, which seems to be the Western coalition strategy.

The peace talks might continue for show, despite the Saudi rump opposition group walking out. The Syrian Army strategy seems to be to carve up the opposition jihadis into four to five pockets around Aleppo so they cannot be resupplied or reinforce each other.

Frankly, I don’t see where they have the forces to do this and the air power, as they needed the full Russian air contingent to gain what they have. Maybe with Southern Syria getting quieter and the Palmyra battle over, that is releasing enough manpower and air support to give Aleppo what is needed. We shall know by the end of May… Jim W. Dean ]

But that came as no surprise, as this is the same media that has lied to us about the Syrian war from day one, so why would they stop lying at election time.

I got a good dose of this back in June of 2014 at the presidential election, along with nine other American observers and three Canadians among the 35 total brought in as monitors to see what was happening on the ground.

I was assigned to the group going up to Homs on election day where the jihadis had only recently been pushed out of the city limits. There were areas that looked like Beirut after the big Lebanese war, where buildings on the front lines looked like they had been used for gunnery range practice.

We went to five different polling stations that day and talked to the surprised and grateful people of Homs who did not know that foreigners would be coming to watch them vote. I had a dual role that day as editor of VT, but I saw the Syrians’ joy at having a chance to talk directly to western media; and what I learned that day taught me a lesson.

Here is how I described it in my NEO column of June 13th, 2014, written when I had returned home.

“I was struck by their humbleness. They saw nothing heroic in defending their country from foreign attack, and they will fight until hell freezes over if necessary.”

Sure, they knew that a domestic opposition had jumped on the Color Revolution bandwagon to begin the civil war, but they also knew the CIA was running the jihadi rat lines with the help of the Gulf States to run a terror war against them.

The people of Homs were not voting just for Assad the man, but for Syria, themselves… and most important, the army. That presidential election was a celebration of their survival as a people, and they knew who to thank for it.

Assad and the army were on the ballot together that day, along with the two opposition candidates. In 2014 as they just did in the current election, the Syrians were voting for unity and survival.

They knew who the enemy was, and I don’t mean just the opposition and the jihadis, but all those who had supported them, which included the US, France, England… and the Western media, for whom they had a special hatred due to the media terror war it had conducted against them.

When we were briefed and had a Q&A with the Speaker of the Parliament on Monday before the eletion, he told us Syria was already holding PoWs from 65 countries. That number was unknown outside of Syria at the time.

It is now in the 80-crountry range because Syria became the Club Med for international terrorism training. Later it was learned that many of the so-called moderate opposition trained in Jordan and Turkey went over to the Jihadis for better pay and the fringe benefits of looting.

On the eve of these new elections, I debated Lawrence Korb on Press TV’s Debate Show. He was an Assistant Secretary of Defense under Reagan, a long time Washington insider who was pushing the media line that the election was not valid because there were areas that could not vote, which I found a bit silly.

Certainly the al-Nusra and ISIL areas would not be voting, and also those opposition groups that were boycotting the election. But what logical grounds could that be for invalidating the election?

The Parliamentary election at this time was not designed to replace the presidential one planned in the Geneva accords, to be held within 18 months. But, it was a show of strength for Assad and the Army at this point due to their turning the war around against the jihadis.

That had taken place on the battlefield due to the Russian air corps intervention that tipped the scales at this crucial time on the front end of the peace talks. The Syrians fought for and won the right to hold their election, and those who had lost were in no position to take it from them.

The last thing the opposition groups wanted to see or acknowledge was their tremendous defeat at the polls, as they could not continue their charade of representing the majority of the Syrian people, which is a bad joke.

Damascus controls 80% of the population now, and that includes 90% of the refugees from areas still under terrorist or the so-called moderate rebel control.

For example, 80% of the Aleppo population is in the government-held areas there, or refugees in other parts of the country, yet our democratic West does not think they should have the right to have their political voices heard at the beginning of the talks.

As a result of the Sryian anti-terrorism coalition success, 1.7 million refugees are already returning to their homes. All are eligible for immediate loans to begin rebuilding their shattered lives. Don’t bother to look for news about this in Western media or Voice of America. It is not there, but that is nothing new.

Going back to the 2014 presidential election, we saw both Britain and France block Syrian refugees and expats from voting by banning polling centers. The Syrians became so enraged they organized charter bus convoys from both countries to take them to Germany where they could vote, with 80% of them choosing Assad. I only learned about that while researching for this article.

The new Parliament election is going to make the opposition look even more ludicrous if it continues with its one-trick pony show of “Assad must go”, which will effectively be saying that all those who voted for him do not matter.

That is a strong hint of what the opposition groups have in mind for the majority, if they can somehow win control of the negotiations. Their only shot at doing that is Balkanizing the country BEFORE the planned presidential election. Lots of Saudi money will be available to buy off a majority of any interim government.

You might notice there has been almost no talk about the new constitution, which is required in the Geneva accords. Part of the reason for that is Syria amended its constitution prior to the 2014 elections when the independent election commission was created.

The commissioners had briefed us monitors two days before the election on the constitutional changes, and we grilled them for an hour on the details of their authority, which included final appeals. But no one knows this because Western media never covered any of it.

Lavrov kept his comment on the news elections short and focused, saying that they were intended to avoid a “legal vacuum” before moving toward any political transition. The opposition crowd will not be sitting at the table from the result of a vote… but Assad will, and that is why they and their backers are trashing the election so strongly. Their mandate is from the Gulf States, the US, and the CIA.

The Western coalition, the Gulf States especially, have refused to finalize an agreed upon list of what opposition groups should be on the terrorist list. Russia offered them all the opportunity to take themselves off the list by signing on to the ceasefire, which many did. Others chose to continue fighting, but the US stonewalled making any decision to take military action against them.

Al Nusra not only continues fighting in the Aleppo area, but has even launched major attacks after having been resupplied by Turkey. So now that the Syrian Army is proceeding to liberate Aleppo after Kurdish neighborhoods there have been hit with chemical weapons, the opposition tries to spin that as Damascus “undermining” the political talks.

These hard core opposition people are at the stage of a rabid dog that needs to be put down for public health reasons. We have listened to their nonsense long enough. The Syrian people want their homes back and the terrorists dead… so let’s get on with what needs to be done, or more will die who did not need to.