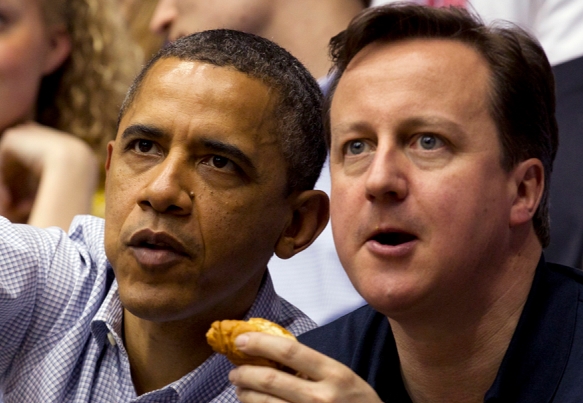 A snap poll by Sky News suggests that today’s outrageous intervention in the EU referendum by Barack Obama has backfired.  That would make sense: Obama is the most anti-British US President of all time.  Some wag suggested this week that George Washington holds that title, but I doubt it.  George Washington was an ex-officer in the British Army, who did good work in the Seven Years War against the French.

Obama’s offensive gesture in removing the bust of the great Sir Winston Churchill from the Oval Office was well understood in my country. The president’s family were on the side of the Axis in World War II. At least he didn’t replace it with a bust of Hitler!

The bust of Churchill was placed there by President George W. Bush, a fine man, who undoubtedly would have fought on the side of the Allies in World War II.  With respect, I doubt that Obama would have fought at all, as there was no draft in Kenya. Neither man saw combat of course, but at least George W. wore the uniform. Never mind that he was in the National Guard – his unit could have been sent to ‘Nam at any time.

Another big difference between George W. and Obama of course, hinted at by Boris Johnson is his understandably angry response to Obama’s intervention, is that unlike Obama  ‘Dubya’ is an American, born and bred. Although he may speak American and eat the occasional hot dog, as I explain in my book Spyhunter, Obama was born in or near Mombasa in what was then the Coastal Protectorate of Kenya. Neither of his parents was a US Citizen. His claimed mother, Ann Dunham, came from a disloyal family – her mother was under FBI surveillance in 1944 as a suspected saboteur at the Boeing B-29 plant in Wichita Kansas, and has been implicated in the theft by the Abwehr of a set of B-29 blueprints. It’s a fair bet that the Dunhams didn’t join in the celebrations on VJ-Day with any enthusiasm. Ann Dunham by the way wasn’t pregnant in the July of 1961, although she is supposed to have given birth to the future president a few weeks later (a shorter gestation than the Chilcot Report!).

Obama was actually born a subject of His Highness the Sultan of Zanzibar, the suzerain of the Protectorate, which was British Protected territory, not a British colony. He became a Citizen of the Republic of Kenya on Kenyan independence in 1963. It is probable that he acquired Indonesian nationality on the marriage of Ann Dunham to an Indonesian citizen named Lolo Soetoro. He never acquired US citizenship by naturalization, preferring to rest on the fraudulent claim to citizenship by birth.

I am of course ignoring the forged birth certificate posted on the White House website, as is the Intelligence Community. It wasn’t even a skilful forgery, indeed it appears to have been photo-shopped. It was good enough to fool the New York Times, CBS and the Washington Post, not that you have to get up too early in the morning to fool that lot, no offense intended.  They still seem to think that Oswald shot Kennedy.

In his controversial Daily Telegraph article Obama started off on the wrong foot by rubbing our noses in over the disastrous post-war settlement, which saw British interests subverted, the settlement having been dictated by the DVD’s Admiral Canaris. The rubbish international institutions set up in 1945, such as the IMF and UN, have all been grotesque failures. The IMF is arguably more of a joke than the UN, given its support of British membership of the euro and failure to predict the global financial crunch.

Predictably, the UK needed a bailout with 3 years of joining the EEC. Higher food prices, VAT and mass unemployment triggered by German imports and German-sponsored industrial mayhem, often false-flagged through the Communist Party of Great Britain, led to stagflation. Not once have I ever seen or heard an IMF official blame EEC entry for the need for the 1976 bailout, even though the two were clearly linked.

The time has come for the UK to leave both the IMF and the UN. The 1945 settlement as an insult to those who fought and died for Britain and the Empire in World War II.

THE EU AND DEMOCRACY

If Obama spent less time on the golf course and more time reading the papers put in front of him he would not have made the blunder he did in describing the EU as an “international institution”. It is and always has been supranational. The EU is nothing whatsoever to do with democracy. It treats member state electorates with contempt. Politicians have been bought up or blackmailed and extensive use made of the DVD’s high-level pedophile ring in Brussels, leading to the tragic kidnap and murder of poor British toddler Madeleine McCann in 2007/8 (sadly, the little girl was kidnapped in 2007 and murdered the following year).

BRITISH INFLUENCE ON THE EU

Britain has scarcely any influence on the EU at all. Obviously we have some, but nobody in Brussels is seriously interested in our opinions. They want our cash and our jobs, and that’s about it. Prime Minister Cameron was treated with contempt when he sought a new deal for the UK, which partly explains the Stay campaign’s poor performance in the polls, by which I mean the real polls, of those intending to vote, and actually able to vote.

The EU’s willingness to go along with the joke nuclear deal with Iran epitomises everything which is wrong with the EU. French and German policy-makers were desperate to cover up the French transfer of plutonium, at German request, to Iran in 2003/4, which has allowed Iran to arm itself with nuclear weapons. The enriched uranium program was always an intelligence blind. The Iranian nukes are plutonium cored, not uranium cored.

The Frogs, the Krauts and the Administration can get into bed with the mad mullahs if they want. We’re not happy about aligning ourselves with terrorist-sponsoring states.

Clearly a UKUSA trade deal is off the table whilst Obama is president. The incoming British government will probably concentrate on trade deals with key Commonwealth states such as Canada, Australia and India, and rapprochement with Russia.

Just as Obama has pivoted America towards China, so the UK is likely to pivot towards Russia, resuming the highly successful alliance, which helped win both world wars. Of course the Special Relationship will survive, but the bitter lesson of the Obama Administration for London is that the Anglo-American relationship really only matters in Washington when there is a Republican president.

With a Democrat in the White House the Special Relationship effectively goes into abeyance. When and if Donald Trump becomes president (oh happy day!) then a UKUSA trade deal is likely. Cameron is already reaching out to Trumpy, whose presidency is looking more likely by the day.

The problem Obama has is that he has neglected the Special Relationship throughout his failed presidency. He has always made it clear that relations with Peking and Berlin were far more important for him than relations with London. He has made very few visits to the UK as president. Cameron has only been invited to Washington a few times. He actually knows very little about America – I’ve probably visited more American states than he has.

Unsurprisingly, Obama’s intervention in the referendum campaign appears to have flopped, ditto the assorted Treasury Secretaries who signed that silly letter.

Interesting comment by ‘Frog’, who I assume is not commenting from Paris! I was unaware that the cameras in Power’s U-2 had been switched, but since the plan was to allow the Soviets to bring the plane down it would have made sense not to let the Soviets have the latest optical technology. I have a shrew suspicion that ‘Frog’s’ information on this point is correct.

There is no doubt that the plan was to have Frank (Gary) Powers shot down, and survive. There is also no doubt that ‘von’ Eisenhower was working for the Krauts. Yes he was responsible for the disgraceful deaths of hundreds of thousands of German civilians and POWs, but that was all part of the plan. No easier way to shake off suspicion that you are a German asset than by knocking off a few Jerries. German Intelligence has always treated the German people as pawns, to be sacrificed for the Fatherland as occasion demands.

This Week’s Review: Man In The High Castle, Series 1

I am eagerly awaiting series 2 of this highly watchable and fascinating TV drama, produced by Amazon, which is fast gaining a reputation for quality drama.

The series is a loose adaptation of Philip Dick’s 1962 alternative history novel. There are in fact considerable differences, the novel perhaps being more believable. The adaptation has however made for gripping TV drama.

The basis for both the book and the series is that the Axis won World War II and divided America between them. Given the extent of German influence in Washington in 1962, set to increase the following year when they assassinated Kennedy, it seems that Philip Dick was well-informed.

By all accounts he was a quirky character, but he was undoubtedly brilliant. He didn’t write the novel just to entertain – he was making a serious point. The trouble with making serious points in fiction – Ian Fleming was doing much the same thing with the fictional SPECTRE in the Bond books – is that they can be too subtle, i.e. readers enjoy the book but don’t get the point.

Excessive subtlety is a fault I suffer from as well, I know. I’m working on it!

The production values are high and the cast talented. I thought that Rufus Sewell as Obergruppenführer Smith was particularly good – he is so sinister he could have been a Chief Constable of Thames Valley Police, no offense to the rozzers intended. Cary-Hiroyuki Tagawa is also good as Trade Minister Tagomi, and Carsten Norgaard as Rudolph Wegener, whose suicide provides the dramatic finale to the first series.

I strongly recommend this program. You won’t find anything as good on CBS.