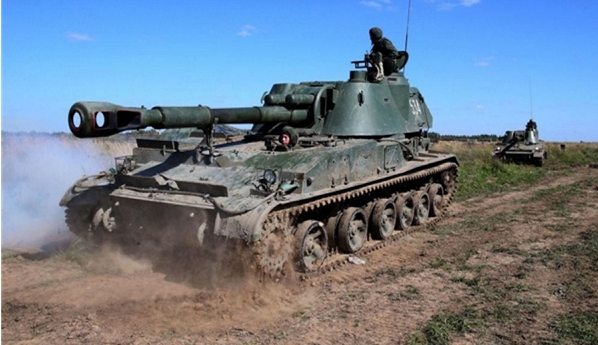 –
TEHRAN (FNA) – Informed battlefield sources said that the Russian Army troops have started repositioning of their artillery units to the Northern part of Aleppo province to reinvigorate the anti-terrorism front near border with Turkey.
–

“Russia has been repositioning artillery units to Northern Syria, including near the city of Aleppo,” the sources said.

On Thursday, Syrian Foreign Minister Walid al-Muallem said Turkey and other countries continue to supply terrorists in Syria with advanced weapons. Muallem said the Syrian government would press on with its fight against terrorists.

Some foreign-backed militant groups have declared a new war on Syrian government forces as opposition negotiators suspended their participation in peace talks.

In the meantime, Syrian Prime Minister Wael Nader al-Halqi said that the ceasefire agreement reached between Russia and the United States of the is being violated by certain parties.

“In the end we see that Saudi Arabia, Turkey, and Qatar, as well as Western countries such as Great Britain and France have no real desire to move the process of the political settlement in Syria forward,” al-Halqi said in the interview.

The Syrian prime minister stressed that it’s “just the opposite, they are aiding in the escalation of terrorist activity and arming terrorists. Over the last week, more than 5,000 troops crossed the border with Turkey into the provinces of Aleppo and Idlib.”

“Many countries in the Middle East and the West, including Saudi Arabia, Qatar, Turkey, France and Great Britain, are attempting to destroy Syria’s infrastructure and its economy, and are arming terrorists in the country because they have no desire to see the political settlement move forward, and instead of helping in the settlement of the crisis, these countries are arming terrorists and sending in troops.”

“At the same time these countries are attempting to shatter even more the infrastructure, destroy the economic capabilities of the Syrian people, and bring Syria down to the status of a ‘failed state,’” al-Halqi said.

The prime minister said that thanks to Russia and the Syrian Army, Western and Middle East countries were foiled in their attempts to make Syria a failed state.

“Thanks to the Syrian Army, the people, its leadership headed by Syrian President Bashar Assad, as well as friends, first and foremost the Russian Federation and personally Russian President Vladimir Putin, they were not able to succeed. Our organized repulsions did not allow them to make Syria the defeated party,” he said.

Al-Halqi said that the fight against terrorism would continue wherever it may be in Syria, and especially against the Nusra Front and the ISIL, which are prohibited in numerous countries including the United States and Russia.

“We are fighting against international terrorism wherever it is in Syria, first and foremost against the Nusra Front and the ISIL,” al-Halqi said.