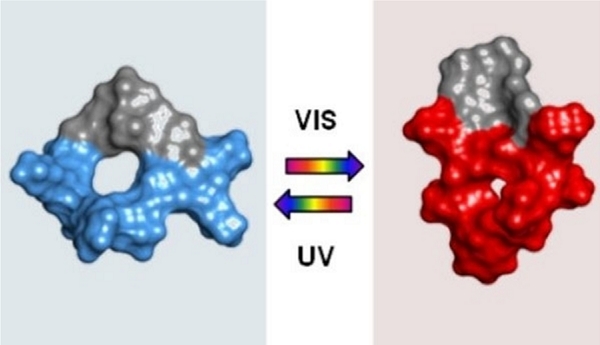 TEHRAN (FNA)- Photoswitchable agents might reduce side effects of a chemotherapy.

So far, photodynamic therapies have been dependent on oxygen in the tissue. But hardly any oxygen exists in malignant, rapidly growing tumors. A group of researchers has now developed a photo-switchable molecule as a basis of an oxygen-independent method.

Photodynamic therapy (PDT) in medicine usually uses a substance that reacts to light and converts the oxygen in the tissue into aggressive radicals. These reactive substances are toxic and damage the neighboring cells, such that e.g. tumors are decomposed. As a result of their quicker growth, however, many tumors have a high oxygen consumption. This reduces the concentration of oxygen available in the tissue, which may aggravate conventional PDT.

Researchers of KIT and the University of Kiev have now developed a new photo-switchable molecule for oxygen-independent PDT. The effect of the GS-DProSw molecule can be “switched off” by ultraviolet light prior to therapy. Only upon application is it “switched on” in the tumor tissue by visible light and damages the tumor tissue there. “The surrounding organs remain in the dark and are not affected by the active substance,” Anne S. Ulrich, Professor for Biochemistry and Director of the KIT Institute for Biological Interfaces, explains. “As a result, side effects are reduced significantly.”

For the first time, this new concept has now been tested on animal models. Once per day, the photoswitchable GS-DProSw molecule was administered. Then, the tumors were irradiated locally with visible light for a period of 20 minutes. After ten days of PDT treatment, the tumors were found to be far smaller than comparative groups not treated with light.

To initiate an oxygen-independent reaction in a PDT, the molecule applied has to be of cytotoxic nature. This means that it has to directly attack the tumor tissue irrespective of other reaction partners. A suitable molecule with cytotoxic properties against tumors is the biomolecule gramicidin S (GS), a natural antibiotic. To prevent it from damaging healthy tissue, the research team inserted a photo-switchable diaryl ethene segment into the ring structure. As a result, the GS-DProSw molecule can be switched between two states with the help of light: The agent can be administered in the inactive state and is activated at the desired location by specific irradiation with light. There, it attacks the surrounding tumor tissue and contrary to conventional PDT, it does not require any oxygen for this purpose.

“This first proof of functioning represents an important step in fundamental research for the development of anti-tumor agents,” Ulrich explains. “But we still have a far way to go: To reliably use this type of photoswitchable molecules for a photodynamic therapy of patients, numerous other studies have to be carried out in cooperation with our partners in Kiev.”