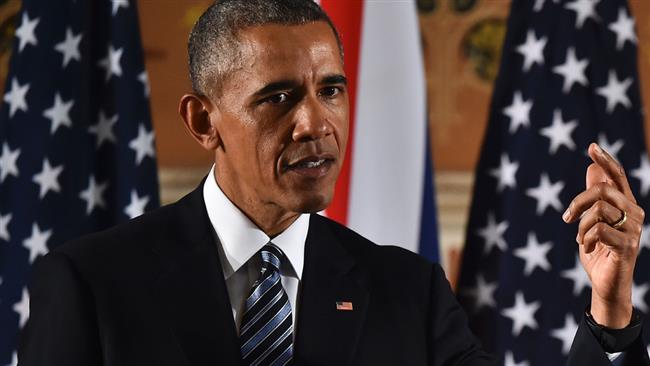 [ Editor’s Note: The Syrian opposition got the bad news today, to forget getting Assad out now as a precondition for pursuing talks. Pay close attention to Obama’s statement that pressure must be put on ALL parties to “broker a transition”.

So he is back to square one of what the Geneva talk protocols statement was to do. Also, missing was the silliness of plan B, which only undermined what he was saying today, as that focused the opposition in the opposite direction of negotiating. I could never understand one molecule of sense in that.

Missing from his statement is anything about stopping the reinforcements that continue to flow into the jihadis in Syria, to both ISIL and al-Nusra and the still-fighting, US-coalition opposition. Maybe he felt awkward about contesting that issue when the US is participating in the supply routes.

Not a word about Turkey, or whether he got King Salman on board the original plan to have the conflicting groups hammer out a deal, via being pressured. Did he pressure Salman, and if so why not Erdogan? Inquiring minds would like to know… Jim W. Dean ]

US President Barack Obama has said that toppling the government of Syrian President Bashar al-Assad would be a mistake. Obama, who made the remarks in an interview with the BBC on Sunday, also ruled out deploying any ground troops to Syria.

“It would be a mistake for the United States, or Great Britain or a common nation of Western states to send in ground troops and overthrow the [Bashar al-] Assad regime,” he said.

The US president, however, said that all of the parties involved in Syria crisis, including Iran, Russian and what he called the moderate opposition group, can be pressurized into brokering a transition.

“But, I do believe that we can apply international pressure to all the parties, including Russia and Iran, who essentially are propping up Assad, as well as those moderate opposition that exist and may be fighting inside of Syria to sit down at the table and try to broker a transition,” Obama stated.

Commenting on the campaign against Daesh terrorists, Obama said, “We can slowly shrink the environment in which they operate.”

Since September 2014, the US and some of its Arab allies have been carrying out airstrikes against purported Daesh positions inside Syria without any authorization from Damascus or the United Nations.

Iran and Russia have helped fight the Daesh militants and other terrorists in Syria, but at the Assad government’s request.

Iran has so far sent a number of military advisers to Syria who have successfully helped the Syrian army kill many terrorists. Russia also launched its air campaign against Daesh and other terrorist groups in Syria last September.

In mid-March, however, Russian President Vladimir Putin ordered a partial withdrawal of Moscow’s forces from the Arab state after peace talks resumed between the government and the opposition in the Swiss city of Geneva.

Syria has been gripped by foreign-backed militancy since March 2011. Damascus says Saudi Arabia, Turkey and Qatar are the main supporters of the militants fighting the government forces.

The latest round of the indirect UN-brokered negotiations aimed at finding a political solution to the Syrian crisis began in Geneva on April 13.

Five days later, however, the main opposition group, known as the High Negotiations Committee (HNC), suspended its participation in the peace talks and left the discussions to protest what it called the Damascus government’s violation of a recent cessation of hostilities.

The truce, which went into effect on February 27 across Syria, initially reduced violence there, but fighting has picked up again, leaving the ceasefire in tatters.