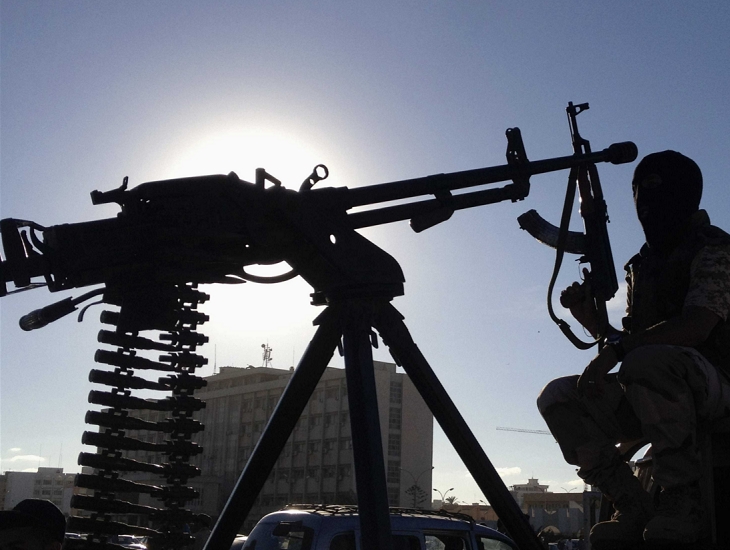 Libya is one place the “Islamic State’s” sponsors believe Russia can’t get them… In 2011, a NATO coalition led by the United States used its own engineered regional campaign of political destabilization, the “Arab Spring,” as a pretext to militarily intervene in first Libya directly, and in a more indirect way, Syria. US and European forces also “quietly” intervened in several other nations, including Mali and the Ivory Coast amid this regional conflagration.

Even in 2011, it was clear to geopolitical analysts that military intervention in Libya was an attempt to divide and destroy the country, giving the US and its collaborators a base of operations to further disrupt and reorder the Middle East and North Africa region (MENA).

Almost immediately after US-led strikes on Libya coordinated with terrorist factions on the ground successfully overthrew the Libyan government, weapons and fighters were sent to Syria via NATO-member Turkey. CNN’s 2012 article, “Libya rebels move onto Syrian battlefield,” would report that:

Their war for freedom in Libya may be over, but almost a year after they won the battle for the Libyan capital, a group of fighters have a new battlefield: Syria. Under the command of one of Libya’s most well known rebel commanders, Al-Mahdi al-Harati, more than 30 Libyan fighters have made their way into Syria to support the Free Syrian Army rebels in their war against President Bashar al-Assad’s regime.

It is difficult to believe CNN’s inaccuracy in its report was not intentional. Far from a “war for freedom,” it is clear that Al-Mahdi al-Harati led just one of many proxy armies raised by the United States and its Persian Gulf allies. The group espouses an extremist tinge propagated by US-ally Saudi Arabia, and in no way represents either the Libyan people, nor the people of Syria it claimed to be fighting on behalf of.

Al-Harati is now “mayor” of Tripoli, and is just one example which goes a long way in explaining the continuous chaos that has engulfed the country. Quite literally, foreign-funded terrorists are running the country. Ironically, the same CNN that in 2012 celebrated the spreading “war for freedom,” would report in a more recent article titled, “ISIS fighters in Libya surge as group suffers setbacks in Syria, Iraq,” that:

There may now be up to 6,500 ISIS fighters in Libya, twice the number previously thought, according to several U.S. intelligence officials.  They attributed the increase to the U.S. analysis that ISIS is diverting more fighters to Libya from Syria — and from Turkey when they cannot get into Syria.

It is ironic because the so-called “Islamic State” (IS) is using precisely the same logistical, financial and political networks to flow back into Libya that CNN’s “freedom fighters” used to get to Syria in the first place.

In fact, it is quite clear Libya is simply reabsorbing the mercenary forces organized and sent to Syria in part through direct US-backing in the Libyan terror capital of Benghazi since late 2011 onward.

Why Washington Welcomes the IS Homecoming

Far from truly alarming to US and European special interests, IS arriving in the lawless warzone of what used to be the functional nation-state of Libya is a welcomed reprieve for what is essentially a Washington-London-Brussels mercenary army.

Syria is not only no longer safe for IS, it has become a grave in which IS is being buried alive. This is thanks not to a successful anti-terror campaign waged by Washington and its allies, but by swift and successful operations carried out by Moscow, Tehran, and their allies in Damascus.

Indeed, with IS supply lines being cut from their source in Turkey and their forces being pushed back across Syrian territory, liquidation of their assets in Syria is well underway. Likewise in Iraq, feigned US operations to stop IS have given way to an increase in cooperation between Baghdad, Tehran, and Damascus.

What started out as an attempt to divide and destroy Iran’s arc of influence across the region has galvanized it instead.

Moving the mercenary forces of IS out of the region is instrumental in ensuring they “live to fight another day.” By placing them in Libya, Washington and its allies hope they will be far out of reach of the growing coalition truly fighting them across the Levant. Further more, placing them in Libya allows other leftover “projects” from the “Arab Spring” to be revisited, such as the destabilization and destruction of Algeria, Tunisia and perhaps even another attempt to destabilize and destroy Egypt.

IS’ presence in Libya could also be used as a pretext for open-ended and much broader military intervention throughout all of Africa by US forces and their European and Persian Gulf allies. As the US has done in Syria, where it has conducted operations for now over a year and a half to absolutely no avail, but has managed to prop up proxy forces and continue undermining and threatening targeted nations, it will likewise do so regarding IS in Libya and its inevitable and predictable spread beyond.

Despite endless pledges by the US and Europe to take on IS in Libya, neither has admitted they themselves and their actions in 2011 predictably precipitated IS’ rise there in the first place. Despite the predictable danger destabilizing and destroying Libya posed to Europe, including a deluge of refugees fleeing North Africa to escape the war in Libya, predicted by many prominent analysts at the time even before the first of NATO’s bombs fell on the country, the US and Europe continued forward with military intervention anyway.

One can only surmise from this that the US and Europe sought to intentionally create this chaos, planning to fully exploit it both at home and abroad to continue its campaign to geopolitically reorder MENA.

Today, we watch what appears to be “ineffective” attempts to confront the growing threat the US and its allies intentionally created in Libya in the first place. In reality, as Russia has proven in Syria, a decisive and relatively small military campaign can deal IS a deathblow.

The US and Europe are more than capable of executing such a military campaign, but is intentionally avoiding doing so. This is not for a lack of political will, but rather because their collective political will instead seeks much wider chaos giving them carte blanche to act regionally with spanning, open-ended military interventions.