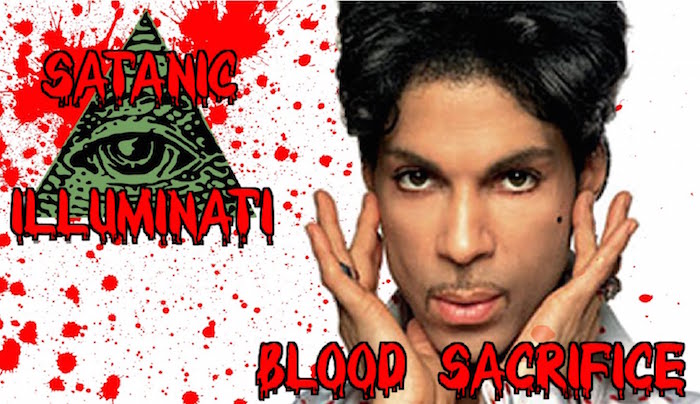 Correction: I wrote this article with the understanding that Prince’s $50,000 donation to the Nation of Islam was for the October 16, 2015 (pro-9/11-truth) march. I have now been informed that it was actually for the October 16th, 2000 march. So he did not donate for a 9/11 truth march. But the main point of this article – that Minister Farrakhan’s pro-9/11-truth position is the main factor eliciting Zionist hatred as expressed in Schlussel’s hit piece – still stands.  –KB, 4/30/16

The artist sometimes known as Prince passed away suddenly last week at the age of 57. First reports said he died “after being treated for the flu.” As of this writing the cause of death is still unknown, and “conspiracy theories abound.”

The mainstream media has noticed that Prince was “a believer in various conspiracy theories” including chemtrails and the NWO-illuminati plan to microchip the population. (Prince repeatedly went up against allegedly illuminati-run big record companies.) He was also a fan of David Icke. Some of his lyrics raised eybrows:

A truthful explanation but you know what? / Eye got another conspiracy. / Thing they’re spraying chemicals over the city. / While we sleep?”

In September 2002, Icke published Alice in Wonderland and the World Trade Center Disaster: Why the Official Story of 9/11 is a Monumental Lie. Did Prince read it? Hear about it? Was he a 9/11 truther?

Maybe he read the 1998 Foreign Affairs article by Zelikow, Ash Carter and John Deutch forecasting a catastrophic “new Pearl Harbor” terrorist attack such as the destruction of the World Trade Center?

Today we learned that Prince donated $50,000 for the Nation of Islam’s Million Family March in October, 2015. It was by far the biggest pro-9/11-truth protest event ever, as described in my article Farrakhan’s “Justice or Else” march rocks DC.

Prince’s net worth was estimated at between $50 million and $100 million. He was worth that much because he didn’t let the Zionist-run entertainment industry swindle him the way they have swindled so many other artists, especially black artists. He changed his name, bought back his catalogue, and generally wouldn’t play their game.

Someone with 50 to 100 million dollars and a high media profile who’s exposing the New World Order agenda could easily be deemed an “actionable threat.”

But what really makes me suspicious is the Zionist cackling, spitting on the man’s memory, and dancing on Prince’s grave. When you see the Zionists doing their victory dance – as I saw a huge group of them doing on the campus mall in Madison, Wisconsin when Bush invaded Iraq – you know they’re celebrating something really nasty.

Schlussel mocks the dead Prince as “The Artist Currently Known as Cremated Wormfood” – a dig at the way he changed his name to prevent his big Zionist record company from robbing him. She is furious that he “never played a concert in Israel” and had a positive view of Islam. But what angers her (and Zionists in general) the most is that he donated that $50,000 for Farrakhan’s pro-9/11-truth event in Washington, DC.

Schlussel calls the pro-9/11-truth Million Family March “an anti-White, anti-Semitic, anti-American hate-fest.” Like the Dancing Israelis of 9/11, and the author of the 2001 anthrax attack letters, Schlussel is trying to confuse white Americans through pushing the deceptive meme that “Israel’s enemies are America’s enemies.”

In a typical neocon/Zionist subterfuge, Schlussel lies about Farrakan supposedly calling for the killing of white people. What she is really worried about is Farrakhan’s support for the full truth about 9/11 – including the lead role played by Israel and its American assets.

Schlusser (and behind her, the ultra-Zionists) are terrified that:

“..at least one of his six to eight siblings and half-siblings will continue to donate to the NOI out of his or her $50-$100 million share of the Prince death lottery.”

And that the Honorable Minister Louis Farrakhan will continue to tell the truth about 9/11.

Was Prince “taken out” to prevent him from spending his money, and using his talent, to expose 9/11 and the New World Order agenda?