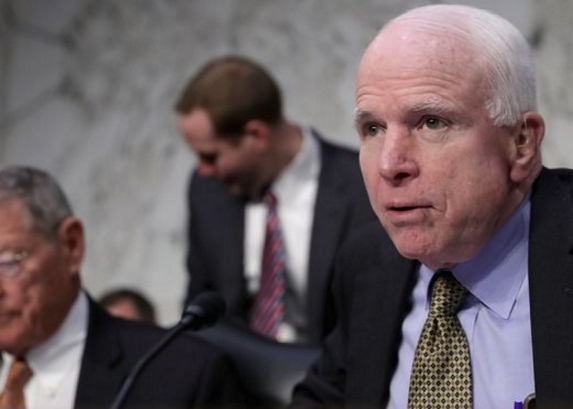 WASHINGTON — The F-35 Joint Strike Fighter’s record on cost, schedule and performance has been a scandal and a tragedy, the chairman of the Senate Armed Services Committee told senior Pentagon officials Tuesday during a withering critique of the most expensive weapons program in U.S. military history.

Sen. John McCain, R-Ariz., said during an oversight hearing held by the committee that the aircraft’s development schedule has stretched to 15 years, deliveries of the F-35 have been delayed, and costs have skyrocketed.

“It’s been a scandal and the cost overruns have been disgraceful,” McCain said. “And it’s a textbook example of why this Committee has placed such a high priority on reforming the broken defense acquisition system.”

Pentagon acquisition chief Frank Kendall and Air Force Lt. Gen. Christopher Bogdan, the F-35 program manager, said the they are “making solid progress” with the F-35 and are confident of overcoming the challenges.

“The F-35 is no longer a program that keeps me up at night,” Kendall said.

The Pentagon plans to spend close to $400 billion to buy nearly 2,500 F-35s for the Air Force, Navy and Marine Corps. The budget request for fiscal year 2017 includes $8.3 billion to purchase 63 aircraft.