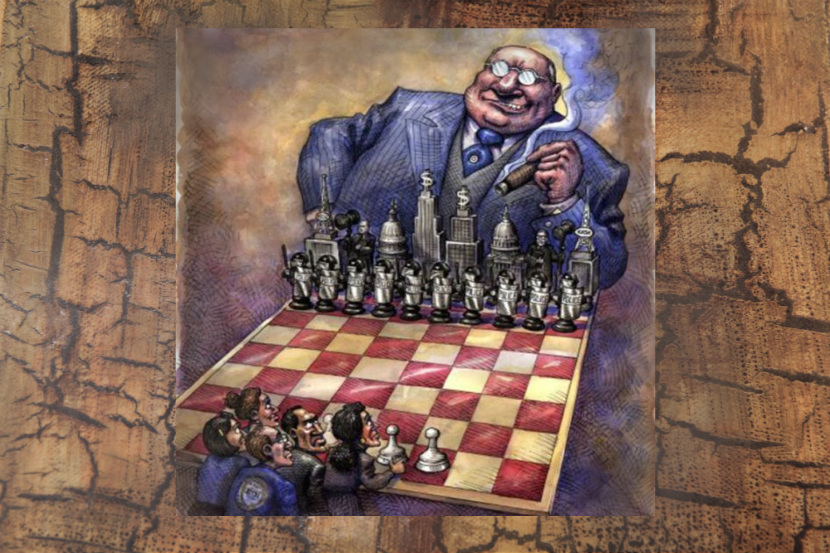 In 2014, the Chairman, Director and Senior Editor of VT disclosed publicly for the very first time that there is no naturally occurring terrorism — it is only violence and wars engineered by the World’s largest organized crime syndicate.

Never before in history has an organized crime syndicate become so large with global reach, and never before so powerful and evil, specializing in the frequent mass-murder of innocent people solely to enhance its power and riches.

It was Gordon Duff, Chairman of VT, who first publicly discussed this sinister reality at the Damascus Conference to Combat Terrorism and Religious Extremism during his Keynote Speech in December of 2014.

Soon after this, VT’s Financial Editor and Talk show host (“Short End of the Stick”) Mike Harris pointed out for the first time that this largest global organized crime syndicate is best identified as the Khazarian Mafia (KM). This name is appropriate, because its origins go back in history to the period 700-1200 AD in the nation of Khazaria, which is approximately the same area as Ukraine.

Mike Harris uncovered a sinister history related to this Khazarian Mafia — one of committing genocide against Armenians in 1915, and mass-murdering over 100 million innocent Russian civilians in the Bolshevik Revolution. The KM also mass-murdered at least that many Chinese during the Khazarian Mafia directed Maoist takeover in China in 1945.

Mike Harris also uncovered the longstanding blood feud of the Khazarian Mafia (aka the Bolsheviks, or Zionists) against  the Russian people for destroying Khazaria in 1240 AD.

It is clear that the Khazarian Mafia has also had a longstanding blood feud against America the Constitutional Republic for breaking away from their City of London establishment that the KM had infiltrated and hijacked via the Rothschild banksters.

This KM blood feud against America has been conducted with the usual methods involving infiltration of key institutions, followed by their hijacking. This has been done within each of the largest US Corporations, which are further consolidated into several larger corporations that cooperate together against consumers and buyers of their products and services.

The application of several key KM processes have resulted in the hijacking and consolidation of most American institutions and large corporations.

These key processes, infiltration, hijacking and consolidation of major institutions, corporations and even most governments, has been repeated over and over in many nations around the world. This has resulted in the stealing of huge amounts of wealth from people and resulting in a worldwide KM hierarchy of control, best described in America as the Establishment Hierarchy.

In essence, these cooperating corporations function as a cartel or an illegal monopoly. This makes it quite easy for the KM to control entire industries and sectors of society, because they ensure that the leaders of the corporations have been initiated into their hierarchy of control and have a personally vested interest in following KM wishes and directives.

This same process has been enacted in every sector of American society after 1913, and we discover that every major institution of government and private industry, as well as most large church systems have been infiltrated and completely hijacked to be under the spell and control of the top leadership of the KM’s hierarchy.

Here is a brief list of the various interlocked Cartels that the Khazarian Mafia has created that control America and have been placed under the control of the Establishment Hierarchy, (and not necessarily in the order of importance).

Each of these Cartels is organized into a large system best referred to as the Hierarchy, and the several wrinkled-up old men in wheelchairs that control it are called the “Select Few” by insiders.

There is some good news with all this bad news

Recently the KM has been completely checkmated for the very first time, and this has been accomplished in Syria by Putin and the Russian Federation with its use of superior state of the art air power at its ally Syria’s request.

Not only that, numerous new economic, trade and monetary coalitions have developed, which in time will sink the US Petro Dollar as the World’s Reserve Currency, maybe sooner than later.

Thus we see the BRICS Development Bank emerging, followed by the Chinese AIIB System and the Chinese version of the Swift money-wire system.

Already most of the world’s governments (except the USA and Israel) have either signed up for BRICS or sent letters of intent. Private trade deals have been negotiated between China, Russia and other nations, which are for the first time conducting trade without the use of the US Petro Dollar. Even Saudi Arabia is beginning to negotiate with the Chinese about mutual new trade deals without using the US Petro Dollar.

The die is set, and no matter how much the Federal Reserve System and its partner in crime the US Department of the Treasury monetize the US foreign debt by buying it back with newly issued but worthless debt-notes, it is only a matter of time that the whole FRS system is going to collapse under its own massive Ponzi scheme of financial fraud and fake money.

I am often asked the question of how can we stop this insidious monster the KM and its Establishment Hierarchy that has hijacked almost every American institution using the extreme power of its debt-note counterfeit money-magick. They have done this by buying or bribing almost every single USG official and US Federal Judge including five of the now eight Supreme Court Justices?

This is a difficult question to be sure. The best way is for the spontaneous emergence of a large scale mass populist awareness all over America at every level. This is in process now thanks to the increasingly negative economic situation and the alternative news on the Worldwide Internet, the World’s New Gutenberg Press.

Abject secrecy is necessary for the KM’s survival and power. Up until recently, any presentation of such realities to one’s family or friends usually resulted in the accusation that such was conspiracy theory or crackpot Internet stuff.

Lately with all the USG lies exposed even in the CMMM, especially when USG economic statistics are reported that everyone knows are clearly lies, folks are catching on and beginning to listen to such talk and believing it for the first time.

The best way would probably be for a patriotic faction of the US Military High Command to wake up and stage a coup d’état and cut the head off of the snake by arresting all of the top Hierarchy members for Treason, Sedition and RICO crimes against America, especially the Select Few.

The problem is that the Hierarchy’s control over all American Institutions has reached the point that we are probably going to have to see the Hierarchy and the KM destroyed by the geopolitical and geo-economic manipulations of Russia, China and its new economic allies all around the world.

As this new reordering of monetary systems and trading nations emerges, the death of the US Petro Dollar is imminent, and when that happens the power of the KM and its Establishment Hierarchy and system of interlocked Cartels will collapse.

In fact, every single one of the KM Cartels listed above is being exposed and many are being checkmated by dissident Americans from all walks of life, including retired Intel, government officials and many of the now well-informed public.

In addition, the Russian Federation, China and their new associations with BRICS nations and AIIB participants are seeding the complete disempowerment and destruction of the KM and the Establishment Hierarchy. The KM knows its end seems imminent, and had built Malaysia and China into economic powerhouses to later parasitize as their new hosts after they have reduced the USA to rubble and dead bodies.

But the Chinese have very long memories and their leaders have connected the dots and are hip to this and working closely with Putin and the Russian Federation to prevent this. In the not too distant future, there will likely be no place to hide for the KM and their Establishment Hierarchy.

Stay tuned, because in a future article, an attempt will be made to explain why the KM members are so two-faced and so remarkably inhuman and evil. We need to find out why they are able to order individual murders and mass-murders of innocent civilians in war at the drop of a hat with absolutely no remorse.