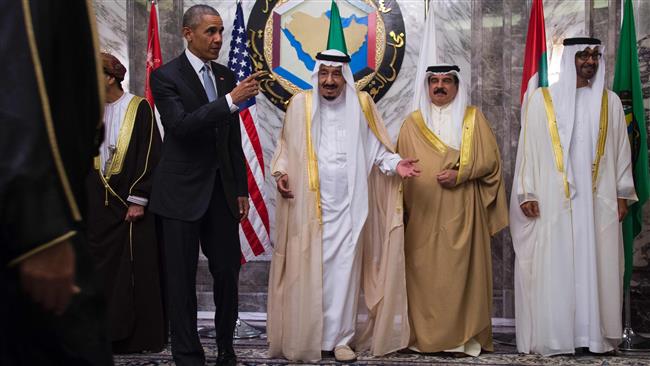 [ Editor’s Note: Salman Sheikh has a nice condensed review of the struggling US-Saudi relationship, which is not an easy task with all of its layers and complications. I don’t know how much mending Obama could have done when some serious marriage counseling seemed to be in order, if it is not too late.

But maybe we are seeing what is the natural life cycle of this relationship. The US reliance on Saudi oil has not been critical for a long time, and more so with a world afloat in excess oil capacity and proven reserves sitting undeveloped while more are sought out.

Africa is floating on an ocean of oil, and it seems the terrorism game has been chosen to postpone any development for some time. That is one reason we see the battles for the pipelines now, as that gives all those hooked up to the European market a key edge over oil tanker deliveries, an edge that it seems countries are willing to kill for.

The Saudis, when they are running in the red, are planning a huge diversification of their economy to not be so oil dependent. Good luck on that, as they will find the business world very competitive and not as easy as drawing up the plans to do it.

They are a decade late and have whizzed away enough money to have already done this. But that takes work, and the kind of diversification I suspect they have in mind is the sweatshop kind like the modern slave state labor models we see in the Gulf. Do they really think they are going to compete in business with the Iranians?

The good news is that once they have made that investment, they will not want to see it blown up in a big war, and that might have them dampen their dreams of glory as the Muslim leaders of the world. The terrorism stain they are going to find is hard to wash out… Jim W. Dean ]

Barack Obama’s visit to Saudi Arabia has happened at a time when political friction between the two states has reached a point where both have started to ‘threaten’ each other—hence, the need for bringing their ties back to ‘normal.’

While this is seemingly what both the U.S. and Saudi Arabia aim at achieving, the gap seems to be too big to be filled by visits merely. It would require massive policy changes, particularly by the U.S. with regard to its revamped relations with Iran, to re-cultivate Saudi Arabia as its ‘vessel’ in the Middle East. This, however, seems to be too ambitious a task at the moment.

The ‘best friends falling apart’ scenario owes its existence to multiple failures that both, as allies, have had to face on various fronts in the Middle East. For the Saudis, failure to topple Assad in Syria and defeat the Houthis and Saleh in Yemen constitute major blows to its claims of leadership of the ‘Sunni Muslim’ world.

Besides it, hit by massive cuts in revenue earnings due to low oil prices—a situation that is a direct result of Saudi Arabia’s own policies—and consequent inability to respond to the on-going crisis situations has created panic among the Saudis and its allies—hence, wayward political and economic decisions.

The Saudis, on their part, have blamed the U.S. for their multiple failures. Policy makers across the kingdom have long said that they feel Mr. Obama does not share the country’s regional interests. And after Obama criticized them as “free raiders” due to their war of atrocities in Yemen, the Saudi policy makers were forced into re-thinking terms of their relations with the U.S. in particular and the West in general.

However, despite the fact that both countries do not necessarily share deep common interests in the Middle East, their mutual dependence (read: Saudi Arabia is the largest buyer of the American weapons and the U.S. happens to be a big importer of Saudi oil) tends to play the role of a ‘fire fighter.’

Saudi Arabia is the largest buyer of American military hardware and services, and those sales have expanded under Obama, with more than $100 billion in sales approved by 2015. Yet, their mutual friction is real and the cardinal purpose of Obama’s visit is to reduce it.

While Obama is in Saudi Arabia to ‘fight the fire’, the U.S. also continues to maintain pressure on Saudi Arabia to a certain degree. This is evident from the way the U.S. government and the U.S. Congress are pressing the Saudis from both sides.

John Kirby, the State Department`s spokesman, when asked to characterise the US-Saudi relationship, said that Saudi Arabia `remains a key partner` and the United States would `continue to look for ways to improve` these ties.

But the U.S. lawmakers do not seem to share the State Department`s enthusiasm. Besides the bill seeking to sue Saudi Arabia for 9/11, the U.S. Senate is also considering another piece of legislation that proposes a restriction on sales or transfers of US-made air-to-ground weapons to Saudi Arabia.

They argue that the Saudi bombing of Yemen was not in the US interest. The resolution, moved last week, followed a Human Rights Watch report alleging that Saudi Arabia used US-supplied bombs in one of its deadliest attacks yet in Yemen.

And in an interview to New York Times, former Saudi intelligence chief Prince Turki al Faisal acknowledged that US-Saudi differences were deep. `America has changed, we have changed and definitely we need to realign and readjust our understanding of each other, ` he said.

This seems to be an oversimplified version though. Far from being a ‘change of heart’, this ‘change’ is a display of the deep divergence between the two countries that has slowly, yet surely, emerged over the years. This divergence can be observed in a number of political decisions that both countries took during past few years.

The US’ refusal to rescue Hosni Mubarak was the defining moment.

This divergence is also glaring in Saudi Arabia’s oil policies aimed at preserving the Saudi market share (which factor in the North American shale revolution as a fierce competitor) and the inevitable shift in the U.S.’ regional and global priorities toward the Asian continent or the ‘rebalance strategy’ to counter China and Russia.

For Saudi Arabia, this pivot to Asia has an altogether different meaning. It tends to interpret it as weakening U.S. security commitments in the Persian Gulf.

This, however, is too much to expect from the Saudi ruling elite who, in turn, owes its existence to the very existence of an ‘enemy at the border’: Iran. Obama’s visit, although important in the current scenario, is, therefore, unlikely to put the U.S.-Saudia relations on the path to normalization.

However, while Obama has expressed his frustration at times with his Saudi allies—who themselves deeply opposed the U.S. nuclear deal with Iran— foreign policy emergencies in Syria means that the U.S. president is highly unlikely to challenge the Saudis on matters of foreign policy and human rights.

For the U.S., the short term objective is to cool the Saudis down. Long-term normalcy does not seem to be forthcoming until the new U.S. administration comes to office next year.