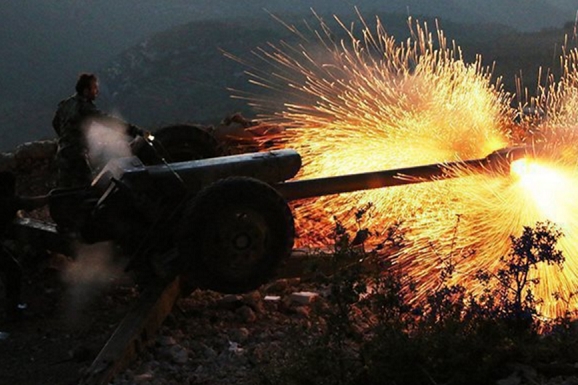 On 1st May 2003, George W. Bush stood in a dinky little flying suit on the deck of the USS Abraham Lincoln and in a super stage managed appearance told the lie of the century: “Major combat operations in Iraq have ended. In the Battle of Iraq, the United States and our allies have prevailed. And now our coalition is engaged in securing and reconstructing that country.”

…by Felicity Arbuthnot for Pravda.Ru

The illegal occupation and decimation of Iraq continued until December 2011. In June 2014 they returned to bomb again in the guise of combating ISIS. As the thirteenth anniversary of Bush’s ridiculous appearance with a vast “Mission Accomplished” banner behind him, Iraq is largely in ruins, Iraqis have fled the murderous “liberation” and it’s aftermath in millions and there are over three million internally displaced.

The nation is pinned between a tyrannical, corrupt US puppet government, a homicidal, head chopping, raping, organ eating, history erasing, US-spawned ISIS – and a renewed, relentless US bombardment. So much for the 2008 US-Iraq State of Forces agreement, which stated that by 31st December 2011: “all United States forces shall withdraw from all Iraqi territory.”

“In this battle, we have fought for the cause of liberty, and for the peace of the world … Because of you, our nation is more secure. Because of you, the tyrant has fallen, and Iraq is free.”

In what has transpired to be monumental irony, he continued: “The liberation of Iraq is a crucial advance in the campaign against terror. We have removed an ally of al-Qaida, and cut off a source of terrorist funding.”

There was of course, no al-Qaida in Iraq, no funding of fundamentalist terrorism under Saddam Hussein, it is the invasion’s conception, birth, now reached maturity from Baghdad to Brussels, Mosul to the Maghreb, Latakia to London.

In Iraq, US terrorism from the air is back in all its genocidal force.

Incredibly on 23rd April, the Independent (2) reported another staggering piece of either disinformation or childish naivety, in a predictably familiar script : “A spokesperson for the US military said all possible precautions were taken to avoid ‘collateral damage’ “, but in approaching 7,000 airstrikes the number of confirmed civilian deaths had risen on Planet Pentagon to just – forty one.

In another past it’s sell by date mantra: ‘Colonel Patrick Ryder, a spokesperson for Central Command, said the casualties were “deeply regretted” but maintained that the campaign was the “the most precise air campaign in the history of warfare.” ‘

And here’s another familiar one: “In this type of armed conflict, particularly with an enemy who hides among the civilian population, there are going to be, unfortunately, civilian casualties at times.” The Geneva Convention, amongst other Treaties, Principles and Conventions, is specific on the protections of populations in conflict, Colonel Ryder should familiarize himself with the texts.

So another onslaught in a quarter of a century of bombing Iraq is underway – another mass murder with a silly name: “Operation Inherent Resolve.”

Here is reality from Dr Souad Al-Azzawi, Award winning environmental scientist who gained her Ph.D from the Colorado School of Mines.

She states of just the onslaught on Mosul, her home, the ancient university city of 1.5 million, that the stated figures from US spokespersons are: ” either misinformed about the real situation on the ground, since they are using drones and guided missiles, or airstrikes blindly, intentionally not saying the truth.

“I would like to list SOME of what the American’s airstrikes have been targeting and killing in Mosul:

* Destroyed are all state services buildings, including Municipalities in right and left sides of Mosul. When they bomb at night, all security personnel get killed or injured, also residents of close by areas, and adjacent properties are destroyed.

* Bombed and destroyed all communication centers.

Destruction of Dairy Production Factories in both left and right sides of Mosul. Casualties of these two are one hundred deaths and two hundred injuries among civilians who gathered to receive milk and dairy products from the factories.

Dr Al-Azzawi reminds that this is reminiscent of the bombing of the baby milk factor outside Baghdad in 1991 with the claim it was a chemical weapons factory. This writer visited the factory ruins just months later, there were still charred containers of milk power – the machinery was provided and maintained by a company in Birmingham, England which specialized in infant food prodiction.

* Mosul University was bombed with ninety two deaths and one hundred and thirty five injuries. Earlier estimates were higher, but many were pulled from the rubble alive. “They were students, faculty members, staff members, families of faculties, and restaurants workers.”

* Hay al Dhubat residential area in the right side of Mosul, two days ago, five women women and four children killed and the whole house. The father is a respected pharmacist who has nothing to do with ISIL.

* Destruction of houses in front of the Medical College, killed twenty two civilians – eleven in one family.

* Bombing Sunni Waqif Building, twenty deaths and seventy injuries   which included those in nearby commercial and residential buildings.

* Car maintenance industrial areas in both left and right sides of Mosul destroyed with civilian’s casualties.

* Bombing of flour factories in both sides of Mosul.

* Rafidain and Rasheed banks and all their branches in both sides of Mosul. Destruction of all commercial and residential areas in the vicinity of these places, with as yet unknown civilian casualties. (My emphasis.)

* Central Bank of Mosul in Ghazi Street, with nearby residential and commercial properties.

* The Governor’s house and close by guest house.

* Food Storages in left side of Mosul bombed.

* All electrical generation and transformer stations in the left side of Mosul bombed.

* Domez land communications center in left side of Mosul destroyed.

*Al Hurairah Bridge – and many more.

There is a sickening familiarity to some of the targets – food, pharmaceuticals, water treatment plants, electricity generation, communications and educational facilities, bridges (the country, towns and cities are divided by the Tigris and Euphrates rivers) have been favoured targets since 1991. Every time painstakingly and imaginatively restored they have been re-bombed for a quarter of a century.

During the 1990’s a Canadian film crew captured footage of US ‘planes dropping flares on harvested wheat and barley, incinerating entire harvests in a country, which due to the strangulating embargo there were near famine conditions in parts of society.

“When Iraqi civilians looked into the faces of our servicemen and women, they saw strength, and kindness, and good will”, said George W Bush in his “Mission Accomplished” speech. No, they saw invaders destroying their lives, their families, their history, raping, pillaging. They saw Falluja’s destruction, Abu Ghraib’s horrors and the eleven other secret prisons and nightmares ever ongoing.

On 25th April Dr Al-Azzawi added: “More war crimes have been committed by American Coalition, yesterday April 24, 2016. The coalition airplanes bombed Rashidiya water treatment plant left side of Mosul city and Yermouk electricity generation station in the right side of Mosul. Through targeting these populations’ life sustaining necessities, the coalition is committing genocidal action towards Mosul residents in the pretext of fighting ISIS.”

Also on 25th April, UN Deputy High Commissioner for Human Rights, Kate Gilmore, on returning from a week in Iraq wrote starkly of the government:

“Iraqis are crying out for fairness, recognition, justice, appreciation and meaningful participation in shaping their future – a process that goes forward and not backwards … We all have responsibilities towards the people of Iraq. While there is an international military coalition in place, a comparably resourced international coalition of practical compassion is also needed to help with the building blocks towards a sustained peace in Iraq.”

In the US military lexicon it seems “compassion” has been replaced by their missiles of choice.

Ms Gilmore also stated that Iraq was being run by a failed government and warned foreign powers not to be “complicit” in its neglect of the plight of normal Iraqis.

Further: “The international community must not allow itself to be made complicit with the failed leadership of Iraq … There is political paralysis in Iraq. There is no government in Iraq”, she stated blisteringly of America and Britain’s illegal, abortive, parliamentary project.

“Our commitment to Liberty is America’s tradition … We stand for human liberty”, concluded Bush on the USS Abraham Lincoln. Were mistruths ever bleaker? And when will George W. Bush, Charles Anthony Lynton Blair and their cohorts answer for their crimes in a Court of Law?

Iraq: Ten years of nightmare
ATTENTION READERS
Due to the nature of independent content, VT cannot guarantee content validity.
We ask you to Read Our Content Policy so a clear comprehension of VT's independent non-censored media is understood and given its proper place in the world of news, opinion and media.