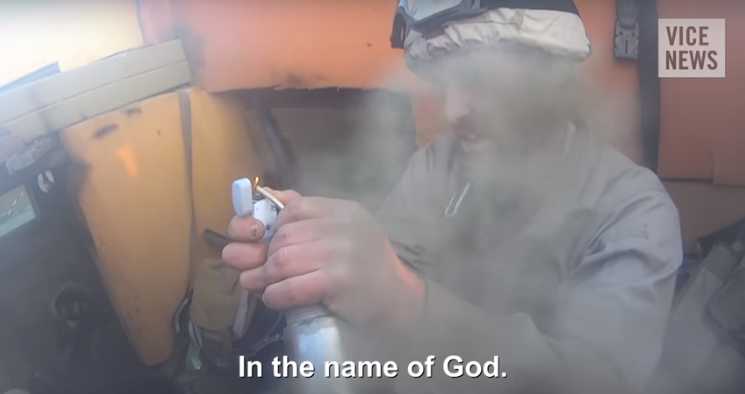 [ Editor’s note: Welcome to the world of helmet cam combat footage, but it was a surprise to see this from an ISIL fighter, apparently recovered from his body after the fight.

This was a strange tactic, sending a lightly armored vehicle out into open territory to engage dug in defenders. The ISIL guys had every Peshmerga gun and RPG gun firing on them.

The ISIL guys have no way to pick up the Kurdish positions while bouncing around as they are moving, so they stop to have a stable firing position…to the delight of the Kurdish RPG guys. It is only a matter of time before they are hit.

It really gets funny with the machine gunner being on the left with his cartridge ejections going right, where the others are working and have their ammo piled on the floor. The gunner should have been to the right and all ammo in the back, out of the way.

You will also notice that none of the jihadis seem to be firing at identified targets, but just doing the Rambo spraying tactic that just runs you out of ammo and makes you easier to kill. I did not see any competent tactics until their fighting retreat. But they had no smoke grenades to cover their retreat, so they were just target practice for the Kurds.

Small arms combat in wide open areas like this without scopes is a losing proposition. It only leaves you with general direction fire, and that only works when you are mortaring a position and using heavy machine guns from the rear to keep your target pinned down as your armored scouts and infantry move up on the flanks.

A single vehicle attack like this was just a live fire training session for the Kurds… Jim W. Dean ]

Before taking to battle, one of the fighters talks into the camera to give his “message” and “speak about the operations of martyrdom because it’s the closest way to paradise.”

Before taking to battle, one of the fighters talks into the camera to give his “message” and “speak about the operations of martyrdom because it’s the closest way to paradise.”

While the fighters seem pretty confident in their improvised armored vehicle early on, the sense of courage soon dissipates and panic sets in as they try to fire their weapons and find their ammunition.

The men seemed particularly angered with one of their own fighters named “Abu Hajaar,” who kept complicating the remainder of his terrorist comrades’ lives.

The men are seen ducking for cover within their truck while they scramble for their weapons with one man shown to be firing a rocket into the distance.

“Good job, but you roasted us too,” says one of the men.

The arguing then continues with Abu Hajaar again taking the brunt of it after hitting one of the others. “What’s wrong with you, Abu Hajaar?” one of the men shouts.

As the shooting continues and the vehicle falls under fire, the men try and fire a second rocket but struggle to find one that fits the barrel.

The terrorists are eventually forced to leave the vehicle after it is struck by a Kurdish rocket which also killed the driver. As they retreat, the man wearing the headcam is shot and is heard screaming as he hits the ground.

The man continues to fire more bullets as he tries to shield himself by rolling away. The video concludes shortly afterwards, as well as the terrorist’s life, apparently.