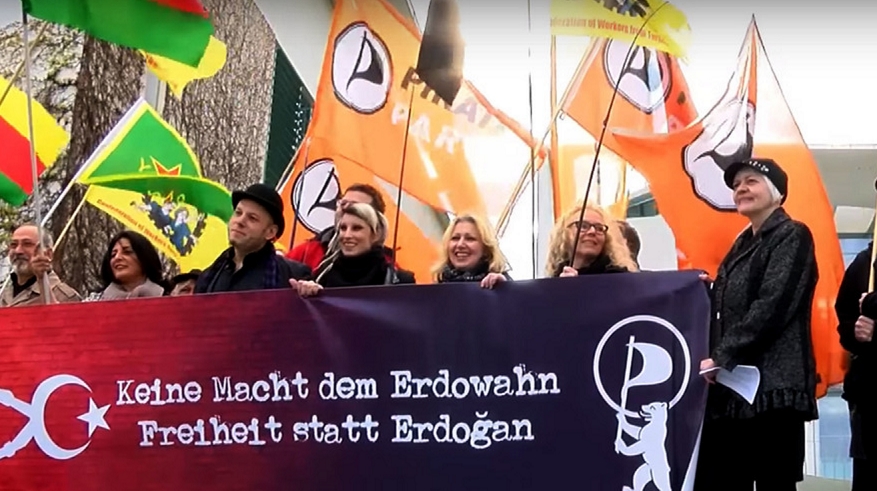 Dozens of pro-Kurdish activists alongside members of Germany’s Pirate Party have held a rally outside the Chancellery in Berlin rejecting Angela Merkel’s cooperation with the Turkish President, which they claim made her an accomplice in human rights violations.
Gathered outside the seat of the Chancellor, demonstrators wielding Kurdish flags and banners were addressed by Bruno Kramm, the head of the Berlin branch of Germany’s Pirate Party.

“Human rights, Mrs Merkel, are not up for negotiation. We are angry because you appoint a dictator as an accomplice due to your own lack of ideas, inconsistency and cowardice,” Kramm said referencing Erdogan, who has signed a migration deal with the EU in exchange for cash last month.

“We are angry. We are angry because you [Angela Merkel] reached out to a despot to withdraw from your responsibility for refugees,” Kramm added accusing the Chancellor of taking a cozy route, instead of dealing with the migrant crisis head on.

“For the phoney garden gnomes of Germany, for the comfort and clean front lawn of the idyllic Germany. Because you fear the open confrontation with the right-wing arsonists and angry citizens, who violate the constitutional rights of others constantly,” Kramm added.

Since Merkel enabled the flow of migrants into the EU in September last year, a number of German parties voiced their concern and anger over the government’s choice to let over one million refugees enter the heart of Europe. The more violent crusades were led by Pegida – Patriotic Europeans Against the Islamization of the West – rallies which oppose Islamic refugees in Germany.

The disagreement with Merkel’s policies intensified further as earlier this month the government sanctioned prosecution against those who depict Erdogan in a negative light, which many view as restricting the freedom of speech in the country. The Pirate Party has been staging weekly Friday demonstrations against what they call “systematic terror of censorship, oppression, despotism and killings by the dictator Erdogan”, after the initiated prosecution of the German comedian, Jan Boehmermann, over the poem he recited on German TV mocking the Turkish leader.

Kramm himself was detained last week for “insulting a representative of a foreign state,” after he had quoted Boehmermann satirical poem during a protest in front of the Turkish embassy in Berlin.

Concluding his speech in front of the Chancellery during Friday’s protest, activists some with taped mouths and flowers proceeded to march in silence to the Turkish embassy, where the crowd protested against Ankara’s crackdown against the Kurds. The organizers explained that the silent march was held to commemorate innocent victims of the Turkish military operation.

For nearly a year Ankara has been cracking down on the Kurdish militias which has resulted in numerous civilian deaths on Turkey’s own territory and in parts of Syria and Iraq. The Pirate Party and the Kurdish activists view it as a gross violation of human rights, especially considering the ongoing discussions of visa-free travel and potential EU membership for Turkey.

The demonstration ended with a vigil at the Turkish embassy, where the Pirate Party, an international political party calling for improved civil liberties and increased direct democracy, installed a temporary dove-shaped statue that was bound in barbed wire.