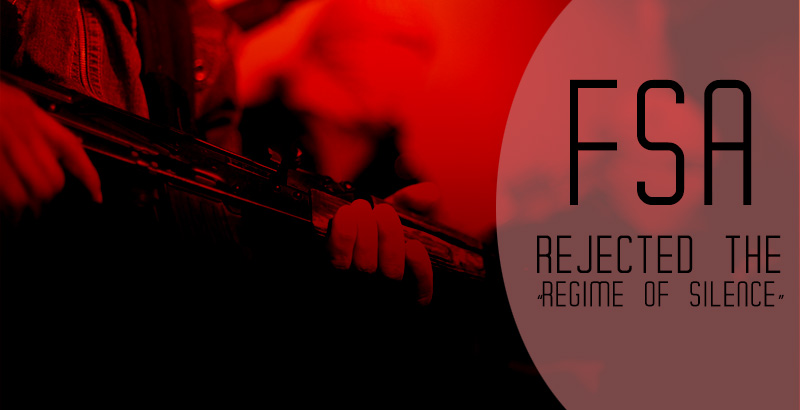 The Free Syrian Army militant group has refused to recognize partial ceasefires and stated that if the UN-backed truce is not implemented in full, the militant group can claim a right to withdraw from the Geneva talks and respond to attacks. The shaky coalition of militant groups, united under the US-backed umbrella organization dubbed the FSA, issued an official statement on May 1.

The FSA also rejected the US and Russia-brokered “regime of silence” which is currently in place in parts of the provinces of Damascus and Latakia since the midnight on Friday. The regime of silence was expected to last for 72 hours. FSA militants accused Damascus of violating the ceasefire in Syria and said they “appreciate the position of the High Negotiations Committee on suspension of the Geneva-3 talks and support it.”

We remember, the Geneva-3 talks were, de-facto, sabotaged by representatives of the HNC, which promote interests of the Turkish-Saudi block. The Salafi militants of Jaysh al-Islam and Ahrar ash-Sham, which represented on the talks, played a crucial role in this sabotage, making attempts to advance in the Latakia province and shelling residential areas of Aleppo City and Damascus.

The so-called Syrian opposition, mainly a diverse range of rebranded Islamist militants, is dissatisfied that Al Nusra, the main striking force of the Salafists in Syria, was recognized as a terrorist group and excluded from the negotiations.

Countering military provocations of terrorists, the Syrian government is pushed to conduct counter-terrorism operations. The HNC argue these operations violate the ceasefire. For example, on May 1, Syria’s forces continued operations in the areas near the Syrian capital, Damascus. The Syrian Arab Army (SAA) and its allies took control of the village of al-Rukabiyah following a day of clashes with the Islamists. Hezbollah fighters reportedly supported the SAA units in this operation.

The al-Rukabiyah village had been under the control of Al Nusra and Jaish al-Islam. Some units of these groups are still operating in the nearby areas. Thus, the close cooperation of different armed opposition groups with the terrorist undermines the idea of the peaceful solution of the conflict.