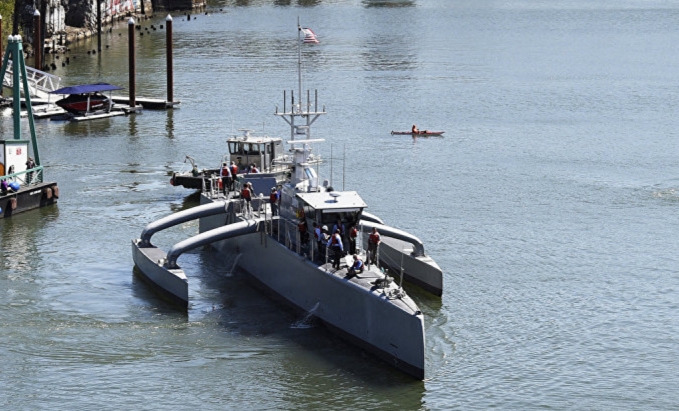 The Pentagon spends $120 million of taxpayer dollars to put an entire industry out of work under the guise of national security.

On Monday, the US Navy conducted an initial test run of the world’s largest unmanned ocean-going vessel, a $120-million, 132-foot ship designed to travel thousands of miles at sea with no human crew.

The vessel, dubbed the “Sea Hunter,” will allow the US to patrol waters without the risk of casualties should the ship come under attack. The US Navy also expects the Sea Hunter to be used as a prototype for unmanned private-sector cargo vessels, reducing costs by eliminating crewmembers.

Before even weighing anchor the ship has already struck upon the shoals of controversy, eliciting scorn from The International Transport Workers’ Federation (ITF), which represents more than 500,000 seafaring workers. The ITF claims the technology cannot replace human instinct and experience to foresee and react to dangers at sea. The ITF also views the progression toward automation in the maritime industry as an existential threat to their member’s ability to make a living.

The vessel departed from San Diego’s shipbuilding district to much fanfare. Civilian crowds rallied to get a glimpse of the robot craft, but no public access was granted aboard.

The Defense Advanced Research Projects Agency (DARPA), the Pentagon’s research branch, developed the ship along with Virginia-based shipbuilder Leidos. DARPA will continue to test the vessel over the next two years off California’s coast, in conjunction with US Naval exercises. The primary focus of the tests will be to determine the ship’s ability to react on its own to avoid collisions and other hazards on the high seas.

“For our military operations we want to make sure we have unmanned vessels like this to supplement the human mission so that we’re not putting people unduly in harm’s way,” said DARPA spokesman Jared Adams.

During early testing, human operators remain onboard the ship. After logging sufficient mileage on the high seas, the adaptive Sea Hunter will be set free to traverse the oceans, autonomously.

Program manager Scott Littlefield explains, “There will be no remote-controlled driving of the vessel.” Rather, at the start of a mission, the US Navy will transmit commands to the Sea Hunter’s onboard software including where to go and what the objective is.

There are no known plans to arm the robot vessel. Instead, current proposed applications for the Sea Hunter include detection of diesel-electric submarines and ocean mines ahead of destroyer cavalcades.