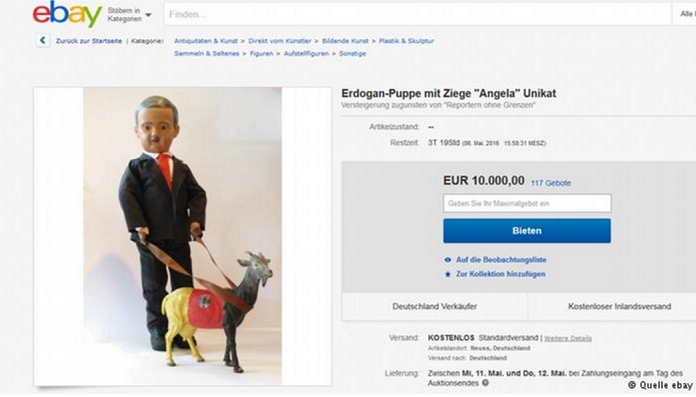 The proceeds of the auction, which ends on Friday, May 6, at 3:58 p.m. local time (1358 UTC), will be donated to “Reporters without Borders.” The non-governmental organization, which defends freedom of information and freedom of the press, uses donations for causes such as the medical treatment or legal fees of persecuted journalists. The unexpected offer of 10,000 euros ($11,500) was made on Monday by an Ebay bidder in Austria, the doll’s creator Marcel Offermann told DW.

The 45-year-old artist from the western German town of Neuss, near Düsseldorf, said he recreated Turkish President Recep Tayyip Erdogan as a 65-centimeter-sized figurine in solidarity with German satirist Jan Böhmermann.

Advertised on Ebay as “one of a kind,” the porcelain reincarnation of the Turkish leader is accompanied by a goat – painted in the colors of the German flag, with the name “Angela” written close to its hind leg – which is held by “Erdogan” on a rein.

Creator of the Erdogan doll, Marcel Offermann, said it was a sign of solidarity with German satirist Jan Böhmermann

“Usually, I don’t take such a clear stance,” Offermann told local German paper “Rheinische Post, “But the Turkish President, Recep Tayyip Erdogan presents himself as a dictatorial ruler and leads the German nation on a leash.”

Böhmermann made headlines around the world last month after his poem, targeting Erdogan, prompted the Turkish leader to sue him for defamation.

The poem which aired on March 31 on the weekly German satirical show “Neo Magazin Royal” accused Erdogan of allowing the physical abuse of Kurds and Christians, violence against women, and repression of minorities in Turkey. It also contained numerous sexual innuendos, including the implication that Erdogan had participated in sex with goats, sodomy, and had a child-porn habit.

On the request of Erdogan, German Chancellor Angela Merkel allowed German authorities to launch an investigation into Böhmermann, citing paragraph 103 of Germany’s penal code, which protects foreign heads of state from insult, as justification for the inquiry.

The decison has sparked a fierce debate on freedom of speech in Germany, as well as anger over Berlin’s decision to give the investigation a green light. If convicted, Böhmermann, who has suspended his show for the time being, could face up to five years in prison.