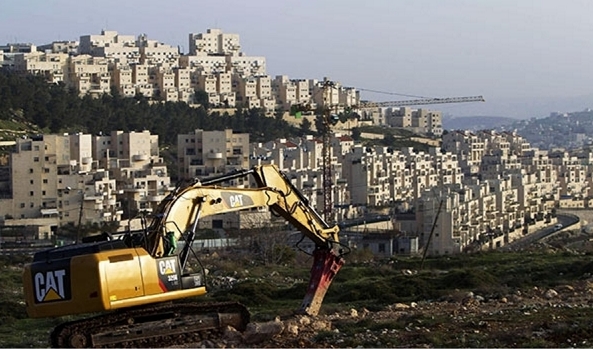 Trump said the settlement construction must “keep going” and “keep moving forward,” because Palestinians fired “thousands of missiles” at Israel.

There are “thousands of missiles being launched into Israel,” he said. “Who would put up with that? Who would stand for it?’

“Look: Missiles were launched into Israel, and Israel, I think, never was properly treated by our country. I mean, do you know what that is, how devastating that is?”

Over half a million Israelis live in more than 230 illegal settlements built since the 1967 Israeli occupation of the Palestinian territories of the West Bank including Eastern Jerusalem. All Israeli settlements are illegal under international law.

Pointing to the stalled “peace” talks, which Palestinian negotiators say will not happen without a halt in new construction, Trump said, “With all of that being said, I would love to see if peace could be negotiated.”

“A lot of people say that’s not a deal that’s possible. But I mean lasting peace, not a peace that lasts for two weeks and they start launching missiles again. So we’ll see what happens.”

Asked about his relationship with Israeli Prime Minister Benjamin Netanyahu, Trump called him “a very good guy” for whom he had made a campaign ad in 2013.

“I don’t know him that well, but I think I’d have a very good relationship with him,” the billionaire GOP front-runner said.

“I think that President Barack Obama has been extremely bad to Israel,” he said.

The Obama administration demanded in 2009 that Israel freeze new settlement construction in an effort to get the two sides to the negotiating table.

Trump’s remarks came ahead of Tuesday’s Indiana primary and his pitch for pro-Israeli voters.

Trump had said last year he would like to initially remain “neutral” in the Israeli-Palestinian conflict as president, a position that he believes would allow him a better opportunity to be seen as a peace broker.

He has repeatedly expressed his affection for Israel and support for Netanyahu and his policies.

In Indiana’s primary on Tuesday, Trump emerged as the presumptive Republican presidential nominee with 53.2 percent support, followed by Cruz with 36.7 percent and John Kasich with only 7.6 percent.