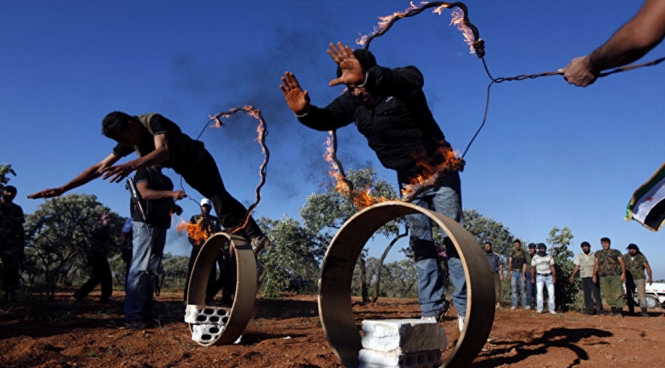 On May 2, the Norwegian Government decided to enhance its contribution to the international US-led coalition’s operation against Daesh. However, Norway is prepared to halt its mission in Syria, if the Norwegian-trained rebels pursue to attack the government forces, says the country’s national defense.

A Norwegian force of around 60 soldiers based in Jordan will provide training, consulting and operational support to local Syrian groups battling Daesh. However, The Norwegian-trained forces should under no circumstances get involved in battles against the Assad regime. If this prerequisite is no longer met, the mission is immediately aborted. The Norwegian forces have no mandate to support operations that are not effective against Daesh, newspaperAftenposten wrote citing military officials.According to Major Vegard Finberg, spokesman for Chief of Defense Haakon Bruun-Hanssen, the rebels supported are to undergo a rigorous and systematic approval and clearance process in order to ensure that the operation’s final aim is none other than Daesh within the framework of the US-led Operation Inherent Resolve.

Must-Go and Nothing Else Matters? Washington Doesn’t Care That ‘Assad is Very Popular’ in Syria

In other words: people who turned rebels against President Bashar al-Assad’s regime will be trained by Norwegian soldiers under the condition that they only attack Daesh and leave regime forces in peace. Norwegian defense sources have not yet made it clear whether the mission will be aborted in the event of a single violation or a pattern.Yesterday, the Assad government denounced Norway’s decision to send special troops to train Syrian rebel groups, whereas Head of the Norwegian Military Officers’ Union, Jens Jahren, argued that the military mission to train Syrian rebels is “very demanding.”

“With so many actors in the field, there is no doubt that the Syrian conflict is an extremely complex one. The very wording of the mission makes the situation further complicated,” Jahren told Aftenposten.

Is Denmark Staking on Kurds in the War Against Daesh?

“The various Syrian groups constitute an incredibly complex landscape, and it is very difficult to discover ‘moderate’ forces, Harpviken pointed out toAftenposten.

According to Helge Lurås, head of the Centre for International and Strategic AnalysisSISA, there is little evidence that support for some of the numerous rebel groups in Syria will bring stability to the region or reduce the terror threat against Europe.

“The training program the Norwegian soldiers will take part in has already been exposed as a total failure,” he wrote in a debate article in Aftenposten.

According to him, the brutal fact is that the US’ and the West’s policy in relation to both Libya and Syria since 2011 has been a fiasco. In both countries, regimes were undermined, which thereby paved the way for chaos, radicalization and refugee flows.Meanwhile, the US itself has a poor record of training Syrian rebels as part of the coalition mission against Daesh as the CIA-led training program, which unfolded in Jordan and Turkey, developed into an economic scandal. The US Congress allocated over 500 million dollars for training, which was halted in 2015, less than one year after the start. Until then, around 380 million dollars were reportedly spent on training around 100 Syrian rebels.

When the first group of 54 CIA-trained “moderate” rebels entered Syria in August 2015, they were immediately kidnapped by al-Nusra Front and were shortly afterwards reported to engage in the combat against the Syrian regime. As a result, General Lloyd Austin, commander of US Central Command admitted to the Congress that only four or five of the first 54 still participated in the fight against Daesh.