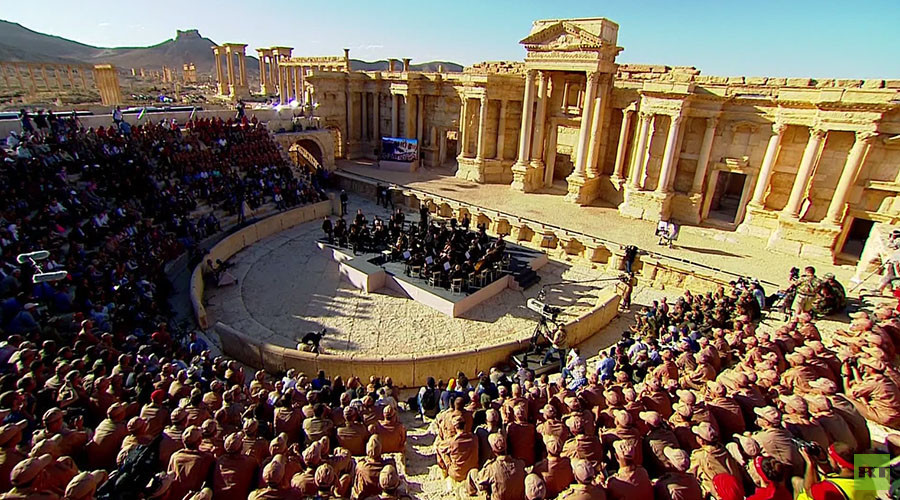 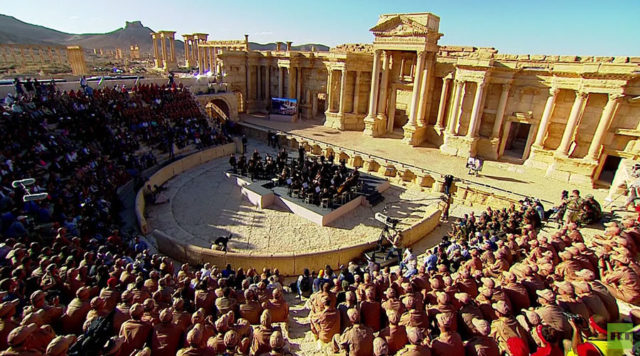 … from Russia Today,  Moscow
–
[ Editor’s Note: I can’t think of a nicer way to say this, but this concert was a wonderful “up yours” to the jihadis and their having planted 3000 mines in Palmyra, all safely removed by the Russian demolition teams, which Moscow has now offered to help clear the many other Syrian towns that were retaken.
–
A concert for the dead who fought to take this World Heritage site back from the jihadis is also a concert to shine the light on all those who have backed a terrorist proxy war on the Syrian people, for which the US, the Gulf States, Israel, Turkey, and NATO bear a major responsibility.
–
If I were Syria, I would ban any of the above’s official representatives from ever setting foot in Palmyra; or even worse, let them bury their bloody hands behind a token effort to rebuild Palmyra. Only those with clean hands should be invited to participate to avoid insulting the 400,000 Syrian dead, minus the jihadis of course.
–
So we salute Valery Gergiev and his orchestra, and all those fighting to free Syria and the region from the dual scourge of modern imperialism with a twist of State sponsored and religious terrorism thrown in. We must all look in the mirror and think about how long are we planning to give a free pass out to state-sponsored terrorism.
–
We have Trump already bragging that he can’t wait to get in on the commander in chief game… like it was a game. That said, Hillary would just be another chilling “Commandress in Chief” herself. God help us all… Jim W. Dean ]
____________
– First published  …  May 05,  2016 –
–

A Russian symphony orchestra led by Valery Gergiev has given a unique performance in ancient Palmyra, recently liberated from Islamic State militants. The concert was devoted to the victims of extremists, and intends to instill hope that peace can triumph over war and terrorism.

The symphony orchestra concert was titled “Praying for Palmyra – Music revives ancient ruins” and was performed in the Roman Theater of Palmyra, one of the few sites still largely intact after Islamic State (IS, formerly ISIS/ISIL) captured the city. The venue served as the main site for the annual Palmyra festival prior to the terrorists’ rampage in the region.

The musical show commemorates those who fell while liberating the city from IS, and also backs the tremendous efforts needed to restore Palmyra’s ruined architectural gems, the organizers said.

The works of such composers as Sergey Prokofiev, Johann Sebastian Bach and Rodion Shchedrin were performed in the concert, during which renowned cellist Sergey Roldugin and violinist Pavel Milyukov also appeared on stage.

Gergiev was among the first to offer support to the embattled city, which was devastated by terrorists during its 10-month occupation. Palmyra was liberated by Syrian troops with Russian air support in March.

Russian President Vladimir Putin said he sees the concert as a sign of remembrance for victims of extremism, and as a promise of hope for victory over terrorism worldwide.

“I regard it [the concert] as a sign of gratitude, remembrance and hope,” he said, adding that all should be grateful to “those who fight terrorism without sparing one’s own life.”

Putin called on people to remember “all victims of terror” and to “hope not just for the revival of Palmyra as cultural heritage of humanity, but for the rescue of modern civilization from this terrible menace – international terrorism.”

Palmyra is a UNESCO heritage site and has seen the destruction of magnificent monuments such as the Arch of Triumph, the Temple of Baalshamin, and the Temple of Bel within the past year.

Terrorists also looted Palmyra’s museums and vandalized its precious exhibits. A team of international experts is currently working to preserve what is left after IS’s brutal reign in the city and is restoring artifacts severely damaged by the militants.

Palmyra is not the first war-stricken area where the famous maestro has given a concert. Gergiev conducted the Mariinsky Theater’s orchestra in breakaway South Ossetia to pay tribute to the victims of Georgia’s August 2008 invasion.