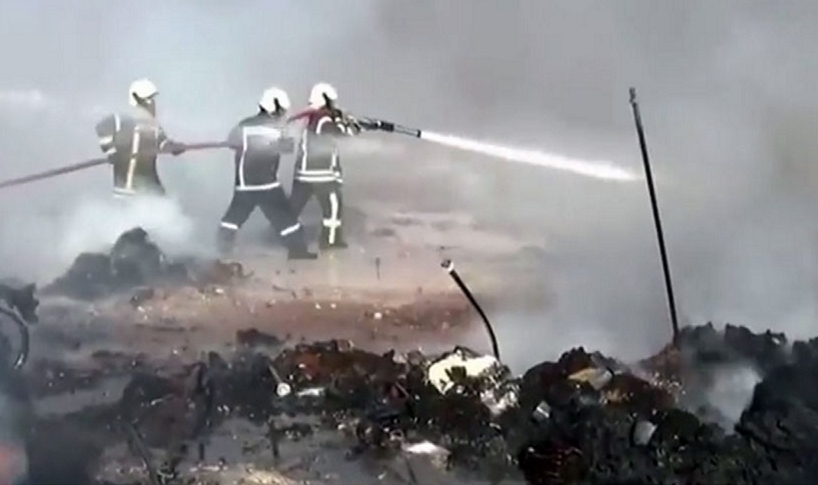 Thursday’s attack on an Aleppo refugee camp could have been carried out by Al-Nusra Front militants, Russia’s Defense Ministry says. The damage pattern suggests rocket artillery use, and air control data show no sorties in the area at the time.
_

“Considering the fracture pattern, seen in the pictures and videos taken at the site, the camp could have been shelled, either intentionally or by mistake, by rocket artillery, which is in active use in the area by militants from the terror group Al-Nusra Front,” Major-General Igor Konashenkov, Russian Defense Ministry spokesman, said on Friday.

He added that after analyzing photographs and video footage from the devastated camp available online, it became evident that “there are no airstrike shell craters or other signs of an airstrike.”

The Russian Defense Ministry states there were no air sorties over the area of the refugee camp on the day of the attack or on the day prior to it.

“We have analyzed airspace objective control data for the area as of May 4 and 5, 2016. There were no flights of Russian or any other aircraft over the camp area,” Konashenkov stressed.

“Since [Thursday] many international media outlets, citing the UK-based Syrian Observatory for Human Rights, have been reporting an airstrike that hit the refugee camp in Northern Idlib province, near the town of Sarmada.

“I want to draw attention to the fact that the initial report oddly coincided with Thursday’s concert of the Russian Mariinsky theatre musicians in Palmyra, conducted by Valery Gergiev.

“The initial report itself cannot be found on the website of the Syrian Observatory, it’s just not there. Only a post on Facebook without time or date of the report, which was surprisingly quickly found and broadly disseminated by a Reuters correspondent, who himself was at the time in neighboring Lebanon.

“Notwithstanding all this, the report was quickly taken up by international mass media and even drew comments from officials from the UN, US and UK.”

Konashenkov said there was no information to sup-port the claims that the attack was carried out by Syrian President Bashar Assad’s forces. UK Foreign Secretary Philip Hammond was one of those who rushed to blame the bombing on the Syrian government.

“The Assad regime’s contempt for efforts to restore the cessation of hostilities in Syria is clear for all to see,” Hammond said in an official statement on Thursday.

Sarmada is a town in Syria’s northwest near the Turkish border, and is said to be controlled by rebel groups opposed to President Bashar Assad. The makeshift camp which was attacked on Thursday is believed to have been temporary home to an estimated 2,000 people who had fled war zones. Some 30 people have reportedly been killed in the attack and dozens more injured.

___________
ATTENTION READERS
Due to the nature of independent content, VT cannot guarantee content validity.
We ask you to Read Our Content Policy so a clear comprehension of VT's independent non-censored media is understood and given its proper place in the world of news, opinion and media.