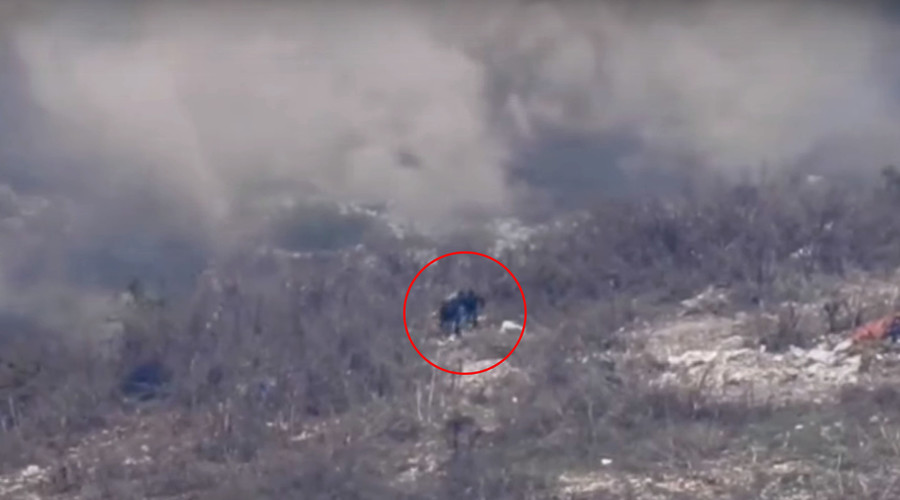 [ Editor’s Note: This is footage from before the new ceasefire with included Latakia. Notice how the Syrian troops must have lots of TOWS to be using them on infantry like this, when a 20mm is a hell of a lot less expensive, even if not as portable.

And notice how the jihadis are smart enough to know that when a drone is zeroing you in for mortar or artillery fire, like it or not you have to leave your holes and boogey, as movement is the only thing that can save you… well… a chance to save you anyway.

This kind of combined operations coordination builds up the infantry morale, that their lives will not be wasted through poor tactics, like US troops were used in Iraq to “draw fire” to reveal enemy positions by walking down a street, a kind of live fire recon… Jim W. Dean ]

The Syrian army has successfully repelled Al-Nusra-led counterattacks in the hills of Latakia province, preventing jihadists from regaining positions which they had lost to the government and national militia forces’ advances last month.

Incredible yet graphic footage of the Syrian army battling pockets of Jabhat Al-Nusra and the Turkistan Islamic Party resistance in north-eastern Latakia Governorate resembles a video game when recorded from a drone hovering above the battlefield.

In another scene, anti-tank guided missiles launched at enemy positions force the militants to run for cover in the strategically important hilltops of northeastern Latakia. Scared of advanced weaponry, the jihadists flee the hills as the Syrian army continues their liberation of extremist-infested areas of the country.

In November 2015, aided by Russian air power, government troops began a campaign to recapture rebel-held territory in the Latakia Governorate bordering Turkey. By March, the military pushed on Kabani, taking over the city in addition to securing the strategic height of Kabani Hill 1154.

By mid-April Al-Nusra-led militants have launched a counterattack in an attempt to take back the province and regain control over the area and supply routes between the Turkish border and Syria’s Idlib province.

So far, the Syrian forces have successfully defended the state controlled areas and have pushed back the jihadist fighters.

After Russia pulled back its forces in February, after conducting a highly successful 5-month military campaign, Moscow continues to supply the Syrian civilians with vital humanitarian aid. On Tuesday, Russian servicemen delivered around 1.5 tons of humanitarian aid to a refugee center in Latakia.

According to Lt. Col. Vitaly Verbitsky, residents received packages with individual food ratios that included canned fish and meat, sugar, flour, dry milk and cereals. Kids were offered sweets, waffles, cookies and candy. In addition, a mobile medical center has been set up by the Russian military in the region to offer treatment to those in need of vital medical care.

“Talking about Russian humanitarian aid, it is, of course, very useful and very necessary,” the director of Latakia’s committee on refugees Sahar Issa told reporters. “Russian humanitarian aid is a great symbol of friendship for us, it reminds us and gives us hope that Russia is with us, that Russia will not refuse us, and that our mutual cooperation will strengthen.”