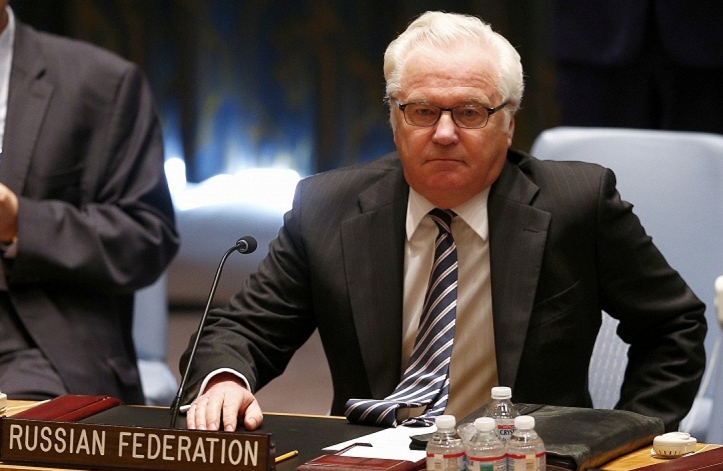 UNITED NATIONS, May 7. /TASS/. Islamic State, a terrorist organization outlawed in Russia, is uncontrollably expanding its zone of activity into Libya, Afghanistan and Europe, Russian Permanent Representative to the United Nations Vitally Churkin said on Friday at a United Nations Security Council meeting on the situation in Iraq.

According to the Russian diplomat, increased activities of Islamic State militants give grounds to doubt the efficiency of the U.S.-led anti-Islamic State coalition.

“We completely support the Iraqi government’s efforts against Islamic State and note certain progress but the upsurge in terrorist activities, especially in Baghdad, makes us grow wary and question the efficiency of the activities of the ‘coalition’ which has been calling itself ‘global’ in the recent time due to some reason. In the meantime, the zone of terrorist operations is uncontrollable expanding beyond the region, into Libya, Afghanistan and Europe,” he said.

“Only an all-embracing approach to anti-terrorism efforts and strict observance of international law may produce a desirable result,” he stressed. “There is no room for double standards here. A consistent and principles approach of all responsible members of the international community is needed to counter this absolute evil.”

On Thursday, Gerard van Bohemen, the chair of the Islamic State and Al Qaeda Sanctions Committee, said joint actions of the states have weakened Islamic State in Iraq and Syria but the group’s geographic coverage is expanding into Afghanistan, Yemen and Libya.

He said Russia is seriously worried over reports about the use by militants of munitions stuffed with poisonous substances. He drew attention of the fact that the United Nations Secretary General’s latest report says nothing about whether “any investigation is conducted into these incidents.”

“Chemical warfare agents are rapidly spreading across the region and are used by terrorists whereas some of the member states are stubbornly seeking to turn a blind eye on that and go on blaming ‘the Bashar Assad regime’ for everything,” Churkin said. “However the analysis of core chemical components of explosive compounds seized from Islamists near the city of Tikrit with a subsequent identification of producer companies and a scrutiny of terms of sales to other countries indicates that these compounds were either manufactured in Turkey or sold there without the right of re-export.”

He said that in this context Russia’s initiative to elaborate an international convention for the suppression of acts of chemical terrorism acquires “extra topicality.” The same, in his words, is applicable to the Russia-and China-initiated draft resolution of the United Nations Security Council on preventing production and use of poisonous substances by non-state entities.

On Wednesday, the Russian United Nations envoys said Western countries “are using trumped-up pretexts to block the Russian-Chinese initiative aimed at checking the threat of production of chemical weapons in Syria and around it by terrorists.”

In April, Russia and China initiated a draft resolution of the United Nations Security Council that binds the countries to immediately report to the United Nations Security Council and the OPCW-UN Joint Investigative Mechanism (JIM) in Syria about any actions of non-government entities aimed at developing, obtaining, possessing, transporting, transferring or using chemical weapons and means of their delivery. Apart from that, the draft resolution tasks the OPCW-UN Joint Investigative Mechanism with monitoring capacities to reveal persons, grousp or governments involved in such activities.

In March, Churkin referred to the United Nations Security Council a letter saying that Turkey is a key supplier of weapons and military equipment to Islamic State gunmen in Syria. He also informed that 1.9 million U.S. dollar-worth of explosive substances and chemical agents were supplied to terrorists from the Turkish territory last year.

Speaking at today’s United Nations Security Council meeting, the Russian diplomat accused Ankara of regular infringement upon Iraq’s sovereignty. He said Turkey’s air strikes “may lead to the death of civilians noted in the [United Nations] report.” “Turkey’s ground presence in the Bashiqa military camp is preserved under the pretext of anti-terrorism fight. Baghdad’s protests are being ignored,” Churkin added