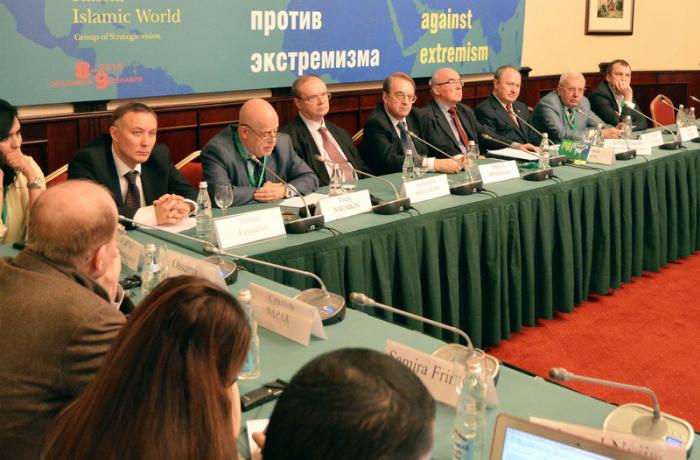 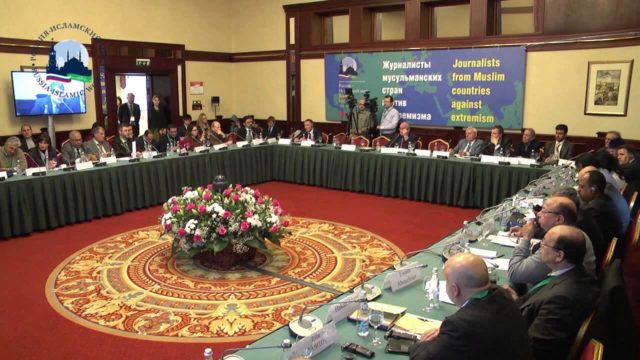 Results of the Second Forum Journalists from Muslim Countries Against Extremism

[ Editor’s Note: Our partnership with NEO provides us some depth and breadth in topic areas off our beaten path, like this anti-extremism conference in Moscow for Muslim participants.

I am bringing Yuri’s article over to VT, as it is the classic example of something that Western media would never cover because it features organized Muslim resistance to Muslim extremism in general, versus the Western version of only being against extremists that don’t serve Western interests.

I videoed a Navy League talk here in Atlanta, January 28, 2009, given by Marine Corp General Doug Stone, a very unusual man. He was a reserve general who had been called up for Iraq War II from his multi-million dollar computer software business in California, which afforded his being able to live on a ranch there.

And by ranch, I mean the kind where the extended family grandkids saddled and rode their horses to a family schoolhouse on the ranch. General Stone wanted them to have that Americana experience. He was part Cherokee, fluent in Arabic, and a Koranic scholar… just the man to put in charge of the prison systems in Iraq to counter their becoming recruiting incubators for the jihadis.

He made the needed changes, like separating the hard core jihadis from the general population, but he also offered “get out of jail cards for all those who wanted them. He debriefed 2000 of them on how the jihadis had conned them (most were illiterate) about there being a Koranic justification for jihad as practiced by the radicals.

They would quote him the verses they have been taught, and he would responded by saying “that is not in the Koran. We will pay for someone you trust to come here with a Koran to read that section to prove it to you.” It blew their minds. He was right.

General Stone also got high command support for providing some kind of job to all released prisoners, because without one, they had only the jihadis to go to for making a living for their families. Stone’s recidivism rate was only 10%, way below the US prison system rate. He shocked the Navy crowd after a long statistical presentation on the numerical resources of the world Muslim community by saying there was no military solution to the problem.

He said this twice, with a dramatic pause, and then said that only moderate Islam could defeat radical Islam, and our job was how to help them do that without undermining their efforts, like their being called sellouts.

The military industrial complex certainly was not interested in that line of thought. His staff only allowed me to shoot if I turned over my tapes until after he had been confirmed as commandant of the Marine Corp Reserves. I got them back after six months, and they are now one of my top ten shoots, where I was in the right place at the right time.

So that is why I brought this piece over. It is Russia providing the forum for this effort, certainly not the West or a NATO country. Putin realizes there is no military solution exclusively, which is why Russia has been calling for a full scale international effort. Nothing else will work, and yet the idea has been rejected by the West, which tells you a lot… Jim W. Dean ]

In order to improve today’s global information space the attendees of the second forum called “Journalists from Muslim Countries Against Extremism” urged all states to ban the channels that distribute extremist and xenophobic materials.

The forum that has recently been held in Moscow attracted over 70 representatives of prominent media sources from Asia, Africa and Europe, along with the members of scientific and journalist communities from Russia.

Delegates from a wide range of countries, from Albania to Indonesia, shared their experience in combating the common enemy – extremism, terrorist supporters and sympathizer along with the ideological propaganda that they distribute. Journalists stressed the fact that without addressing the socio-economic problems of Islamic societies, one cannot genuinely hope to fight extremism, since more of often than not bitter poverty and despair forces people into joining radical groups.

Most attendees agreed that in recent months ISIS forces have been pushed back, especially due to Russia’s military involvement in Syria, which deprive this terrorist group of the strategic initiative along with the territory which it previously controlled.

This statement has been supported by Hamdy Handal El Sayed Mohamed (Vice-President of the Egyptian newspaper Al-Gumhuriya), Mohammad Al Bishar (from Morocco the deputy head of the European Muslims organization), and a former Yemeni Minister Vaed Baadib, who labeled Russia’s actions in Syria “a unique surgical operation.”

At the same time most journalists agreed that you cannot effectively combat terrorism with military means alone.

Radical Islamists have been consistently expanding their activities in social networks, while making an ever increasing number of propaganda movies and clips. According to Iran’s ambassador to Russia Seyed Rasoul Mousavi, ISIS has even created its own satellite channel, that broadcasts a wide range of various propaganda programs, including those for children, women and the elderly. One can note that the website of this terrorist group has been translated into 18 languages.

Turkish writer Selcuk Gyultashly (from the opposition newspaper Zaman) in his speech urged the world not to fight against mosquitoes, but fighting the marsh that creates them instead. Journalists are supposed to objectively cover various events, while giving them a professional evaluation. They must avoid the search for external enemies or conspiracy theories to explain the causes of extremism.

The attendees of the forum shared their thoughts on how to put a barrier to the spread of destructive ideas in social networks. The general conclusion has been that the financial sources of radical cells and terrorist organizations must be carefully tracked in order to see a decline in their propaganda activities.

It has also been mentioned that without the systematic monitoring of radical channels and websites that promote “hero martyrs’ and the cult of death, one cannot provide an adequate answer to the propaganda war ISIS has been waging.

The second forum “Journalists of Muslim countries against extremism” that has been organized by the Group of strategic vision “Russia – Islamic world” showed that journalists that stand at the forefront of the fight with the common enemy are capable of mutual support in their belief that Russia can become a coordinating player in the common effort.

The attendees welcomed the decision to establish Yevgeny Primakov International Prize that will be awarded for the best anti-extremism publications, along with the opening of the Arabic version of the Group of strategic vision “Russia – Islamic world” website.

[Note: MGIMO is like Georgetown and Harvard Universities combined in academic prestige ]