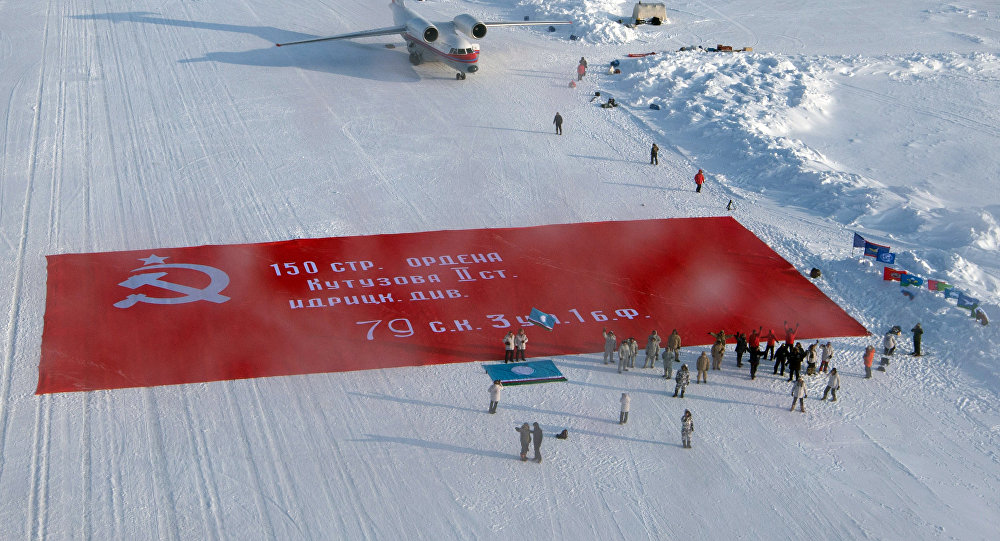 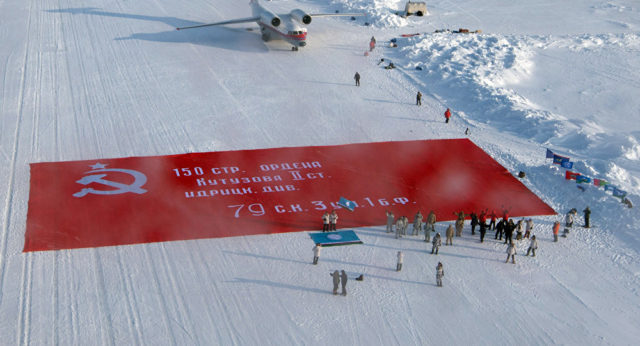 [ Editor’s Note: The Russians are getting ahead of the game. They know when the last WWII vets die off that Victory Day can begin a slide down hill in terms of national remembrance.

Who knows, maybe there will come a political correctness epidemic like the anti-Confederate Jihad we have going on in the US to move Confederate monuments  from public view so the liberals have something to claim as a social victory.

Maybe someday young Russians could thing that Victory Day was a “communist thing” and we don’t want to set a bad example for honoring it. But I doubt it. They have more pride than we do, it seems. They can honor their dead and leave the politics out of it.

This creative campaign to place Victory Day flags all over, above, and under the world is another example of Russia on defense, guarding against cultural amnesia setting in and its people forgetting how they were forged on both the hard anvils of communism and WWII, plus getting financially raped by American economic helpers as their contribution to forging a lasting peace.

Russia has a list of cities that each lost more dead than the US military did during the whole war. Most Americans have no grasp of this at all, because they are taught a Hollywood version of history that is carefully scripted, like the phony War of Terror we are in the middle of now... Jim W. Dean ]

On the occasion of the 71th anniversary of the Soviet Union’s victory over Nazi Germany in World War II, the largest copy of the Victory Banner, placed May 1, 1945, on the roof of the German Reichstag, will be placed at the North Pole.

–
The initiative is a part of the “Banner of Victory” project, which aims at the patriotic education of Russian citizens and draws attention to the role of the state symbols.

However, the North Pole is not the only unusual location where the Victory Banner has been placed. Some of them are listed below. 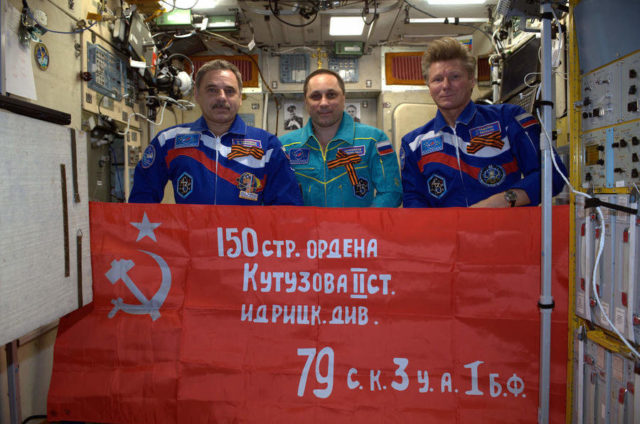 On March 27, 2015 the space crew of “Soyuz TMA-16M” delivered the Banner of Victory to the International Space Station. In this way, Russian cosmonauts congratulated their compatriots on Victory Day.

At the top of a mountain

On the occasion of the 70th anniversary of victory in the Great Patriotic War in 2015, servicemen at the Center for Mountaineering and Survival climbed Mt. Elbrus and set up a banner there.

In January 2015, Russian climbers also set up the Victory Banner on the top of the highest peak in South America, Aconcagua, in Argentina. According to the team leader Pavel Romanovich, the idea was born a few years ago, when they has been preparing to conquer the highest peak in Africa, Mt. Kilimanjaro.

In April 2015, athletes from the Yakut diving club “Aquastar” dove with the Banner of Victory to the bottom of the ice-covered Lena river.

In May, the same year, Sakhalin’s customs commandos carried the Victory Banner to the bottom of the Sea of Okhotsk.

“Our grandfathers achieved victory conquering a lot of difficulties […], so our dive we have devoted their immortal dead,” team member Maxim Kotov told RT.