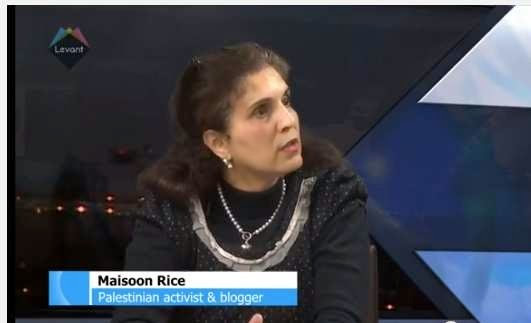 Help Kevin keep these shows on the air – PAYPAL a one time donation, or a regular payment, to truthjihad(at)gmail[dot]com. NOTE: AS OF TODAY, TRUTHJIHAD.COM IS BEING REPAIRED AND IMPROVED. IF YOU WANT TO JOIN, AND GET EARLY ACCESS TO MY SHOWS AND OTHER PERKS, EMAIL ME AT TRUTHJIHAD(AT)GMAIL{DOT}COM AND I’LL EXPLAIN THE WORK-AROUND.

Maisoon Rice is a Muslim mom from a Palestinian-Pakistani background. She is beloved in some circles, and notorious in others, for her hard-hitting interventions on Zionism, Jewish identity politics, and more. (Maisoon managed to get herself banned from the George Galloway show – which makes her an ideal guest on free-speech-loving Truth Jihad Radio!)

In this interview, Maisoon discusses the Zionist war on Palestinian mothers. Examples include:

*Israeli Minister of Justice Ayelet Shaked’s call for the mass extermination of Palestinian mothers because they “give birth to little snakes.”

We also discuss the role of women and mothers in Islam. (Maisoon says Islam treats women far better than the West does, but that unfortunately some Muslim men follow tribal traditions rather than religious teachings.)

Maisoon sends out an excellent email digest of stories relating to Palestine, Zionism, and the phony “war on terror.” To get on her email list, contact me at TruthJihad(at)gmail[dot]com and I will pass on the request.