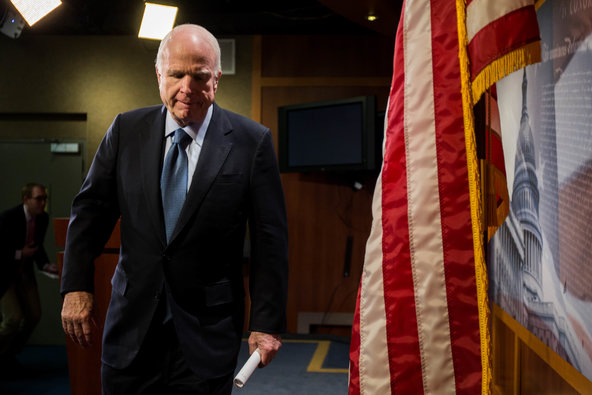 Senator John McCain of Arizona called on Donald J. Trump to make amends to veterans for his belittling comments about prisoners of war and suggested he would be unlikely to appear on a stage with Mr. Trump until that happened.

Mr. McCain has committed to supporting Mr. Trump as the Republican nominee for president. But in an interview that aired on CNN’s “State of the Union” on Sunday, Mr. McCain expressed deep dismay at the tenor of the Republican presidential race, saying Mr. Trump make amends to “a body of American heroes” he had offended.

Mr. Trump mocked Mr. McCain last summer for having been captured and imprisoned during the Vietnam War, saying that he preferred “people who weren’t captured.”

Mr. McCain, who was the Republican presidential nominee in 2008, told CNN that he was personally indifferent to Mr. Trump’s ridicule but that he could not abide the affront to veterans in general. Asked if he would appear on the campaign trail with Mr. Trump, Mr. McCain said “a lot of things would have to happen” first.