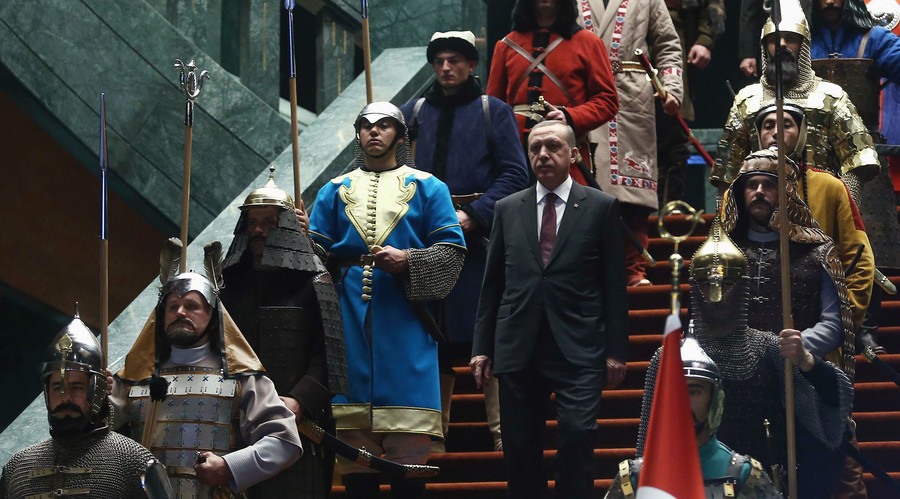 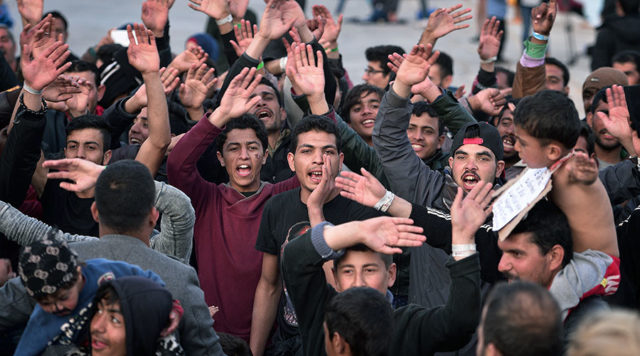 [ Editor’s Note: The gloves are off. Turkey says “no” to EU demands to update its counter-terrorism law as one of the visa-free regime requirements. So we have Sultan Erdogan ruling what he is not willing to do, and threatening to unleash the hordes he is holding.

For the EU to fold up its cards now would make it look like a joke, which might not be a bad thing in the long term so some fixes can be made.

But in anticipation of this Turkey move, the EU leaked that it was considering shifting the 6.6 billion euros promised to Turkey over to Greece, and to move the refugees there, and give one hell of a boost to the Greek economy, plus help solve two birds with one stone on the Greek debt negotiations.

Erdogan is definitely on the offensive. I smell the Saudis solidly behind him. He is whining about NATO having more ships in the Black Sea, which he called a Russian Lake this week. He has backing Azerbaijan in taking Nagorno-Karabakh back, and the Crimean Tatars offering themselves up as cannon fodder in the Ukraine mess.

On top of this, he is funneling fighters, weapons and supplies to jihadis in Syria to trash the ceasefire and maintaining his troop presence in Iraq. He has been a busy boy in terms of competing with the US on regime overthrow. He even has his sights on Europe, it seems.

Europeans seem to be taking this all in stride. In France, the labor reform opponents have people battling in the streets, and forgotten are the terror attacks. Brussels is back to normal, and the immigrant rape news in Germany has disappeared. Nothing like a new good diversion to bury a sticky social or political issue, and now it seems… even a terrorism problem… Jim W. Dean ]

Kuzu made several statements on Twitter in anticipation of Wednesday’s session of European parliament, at which visa exemption for Turkish nationals in the Schengen zone – as part of a migrant deal between Brussels and Ankara – was to be discussed.

“The European Parliament will discuss the report that will open up visa-free travel in Europe to Turkish citizens. If it makes the wrong decision, we will send the migrants back!” he wrote.

He also told Bloomberg: “If Turkey’s doors are opened, Europe would be miserable.”

“Europe is on the edge of an important decision: It will decide on Turkey’s visa-free travel rights today. If a positive decision comes out, this is also a benefit for Europe,” the MP wrote in a separate tweet.

Kuzu, a member of the Central Decision and Executive Board of President Recep Tayyip Erdogan’s AKP (Justice and Development Party), was trending on Turkish Twitter due to his comments.

It’s not the first time the deputy has threatened to flood Europe with over 2 million migrants from North Africa and Middle East, stranded in Turkish refugee camps.

“Finally the EU understood Turkey’s stake and loosened its purse strings. What did we say? ‘We will open the borders and set Syrian migrants on you’,” he wrote back in December 2015.

“Schulz said we will only start processing the file when the 72 criteria have been met,” she added.

According to two deputies, who opted to stay anonymous, the move is aimed at putting pressure on the European Commission so that it would take a firmer stance on Turkey fulfilling its part of the deal.

“The ball is back with the European commission,” one of the MEPs told EUobersver, while the other stressed that the suspension will “make the parliament more important.”

The Turkish minister will also hold talks with Johannes Hahn, Commissioner for European Neighborhood Policy and Enlargement Negotiations, on Friday in Brussels, according to European Commission’s press service. However, no press events were planned following both meetings.

On May 4, the European Commission proposed to the European Parliament and the EU Council to lift visa restrictions for Turkish citizens, if Ankara fulfills five conditions by the end of June.

They included measures to prevent corruption, holding talks on an operational agreement with Europol, judicial cooperation with all EU member states, bringing data protection rules in line with EU standards, and the revision of legislation on the fight against terrorism.

Bozkir told Turkish NTV broadcaster Wednesday that “it is not possible for us to accept any changes to the counter-terrorism law” as demanded by the EU.

With Europe hit by the biggest migrant crisis in decades, the EU and Ankara signed the migrant deal back in March. According to the agreement, Turkey would take back refugees seeking asylum in the EU in exchange for a multi-billion euro aid package and some political concessions, including the visa-free regime.