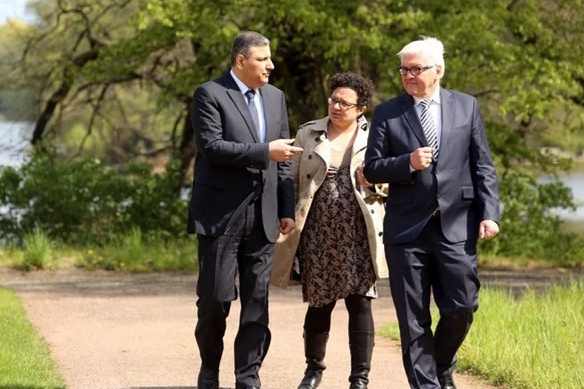 Following the heinous shelling of hospitals and residential areas in Aleppo by what the West labels ‘Syrian rebel militias’, German foreign minister Frank-Walter Steinmeier on May 4th welcomed to Berlin the man the West claims is one leader of the Western-fabricated ‘Syrian opposition’.
The man, better known as Riad Hijab, is a former short-time PM of Syria before he had been kicked by president Assad in 2012 and fled to Jordan from where he then started his obstruction against Syria. Steinmeier aims to bring back his very own ‘rebels’ to the negotiation table in Geneva where they meet the true representatives of the Syrian nation and people.

Obviously, the German FM is eager to restart nonworthy “peace-talks” and to achieve a new truce because the Western puppets of Jabhat al-Nusra, which claims to be Al-Qaeda in Syria, is about to be totally crushed in Aleppo and elsewhere, whilst the Syrian Arab Army is pushing hard on the Western proxy Daesh (ISIS) as well. These are bad days for terror-loving Steinmeier, indeed.

The truce which had not been spoken for Aleppo before, is a vital interest of the Western terroristic nations who made all the gangs with the fancy names which are just all the same in killing civilians. From the Western position, the truce is to be used to re-enforce, re-group and re-arm the terrorists the West still labels ‘rebels’ as these rebels are the Western ‘boots on the ground’, fulfilling Western orders, based on Western interests.