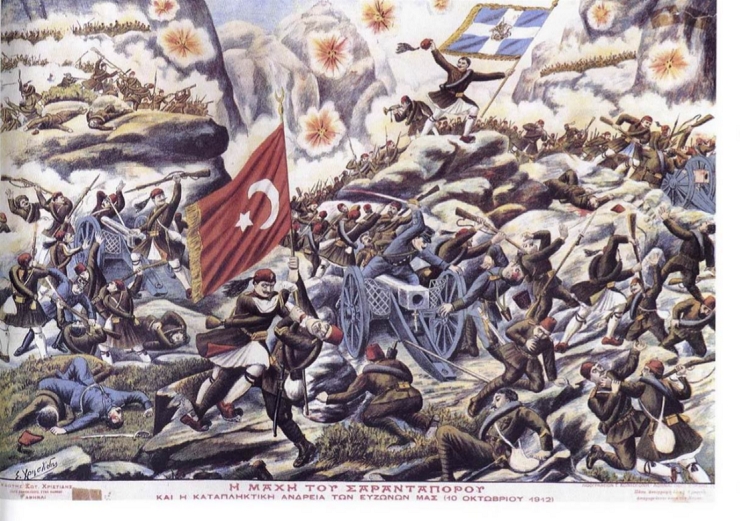 The Balkans have, for centuries, been a tinderbox. In August 1914, it was the Balkans and a cascade of happenstance events that sent the world to what was imagined then to be the most devastating war possible.

That war was the result of entangling alliances, Germany and Turkey in particular, aligned against Russia and Serbia. History is repeating itself, as to how much history, and how great a disaster, those who have forgotten history now open Pandora’s box.

A few weeks ago, Turkey, Ukraine, Bulgaria and Romania signed a joint military “training and preparedness” agreement. Nobody noticed. Ukraine is spending $17bn of its debt pay-off cash from the IMF on weapons, buying everything they can whether it works or not, as long as bribes and payoffs accompany the purchases that are overloading the port of Odessa. Nobody notices this either.

Turkish “grey wolves” and Tartar terrorists are running infiltration operations into Crimea while ISIS and al Qaeda, not just cells, but company sized fighting units, are setting up across Ukraine for what many see as the upcoming war there. Nobody is noticing this either.

Nobody noticed when ISIS units in Azerbaijan joined the Nagorno-Karabakh conflict on behalf of Israel, Turkey and Saudi Arabia.

Then we had Orthodox Easter and church fires in New York, Australia and elsewhere, fires we are told were tied directly to Turkish intelligence. This was unreported also.

Then there is the destabilization war in Macedonia, an open war by Turkey against Christianity in the Balkans. Then again, there is that other alliance that isn’t reported, between Turkey and Albania, an alliance that includes Kosovo and ISIS and al Nusra and Saudi cash.

What has happened is that globalist “masterminds” intent on mischief have been very busy. Overthrowing governments gets to be a habit, color revolutions, spreading “freedom,” no matter how many disasters such as Iraq or Afghanistan or Libya or Syria or what will be happening next week in Egypt, no matter the suffering and mayhem, those who “can” will always “do.”

They don’t seem to ask why nor do they care nor can anyone identify who “they” are other than to throw names around like “Soros.” But there is a “they,” no question about it, and “they” are aiming at destabilizing Europe, using economic warfare, refugees and the idiocy “extreme” of Europe’s own bureaucratic monster. Toward this end, the wheels are long in motion.

With collective memory rather short nowadays, we might well remind the reader that the refugee crisis of this year comes on the heels of five years of economic manipulation that crashed the economies of Spain and Greece, both “ground zero” for the refugee influx.

Author Dr. Preston James has his own hypothesis for what is now happening, perhaps it is farfetched, perhaps it isn’t. Below is the Globalist plan, as I see it, to import so many immigrants into Europe, intended to produce a new Pan-European fascist police state:

Since the end of World War II, the United States has exercised its global reach through surrogates, initially as part of what was perceived as an ideological war with world communism.

However, with the fall of communism and the Soviet Union in 1991, we have to ask ourselves, was this a proper assessment of global politics or were things driven for other reasons, perhaps economic, or in service of something more primitive and sinister than the “freedom v. communism” dialectic?

Were one to take the short-lived period of free trade and relative demilitarization during the Clinton presidency in light of historical context, we can now look on that era as an anecdotal “blip.”

Though there is no “Red Menace,” no “Axis of Evil,” as President Reagan so inaptly coined it those decades ago, the race for superweapons, the machinations of opposing empires continue, despite the painful fact that opposing empires simply don’t exist.

There was no Iranian nuclear program to control, ISIS is not an Islamic phenomenon at all, 9/11 wasn’t perpetrated by terrorists and Russia and China are hardly joined together as a threat to anyone.

What we do have is manipulation of events by actors who are seemingly inadequate to the task, Turkey, Saudi Arabia, Israel with or without minor states of the Persian Gulf.

Backing them, if you can accept our misuse of the term, are European political leaders, Merkel always, Hollande and Cameron occasionally, but when batched together, hardly capable of world domination, or so it would seem if were to apply what we know, or what we knew, or what we thought we knew about the nature of power.

Have the rules changed?

The new “nuke” seems to be the malleable human, the religious believer, the refugee bereft of hope, the fearful European, a hundred million young Muslims who will never hope to enjoy a life with meaningful employment and a family, a mercenary army “on the cheap” beyond imagination.

Is the new globalist more social scientist and chaos theory mathematician and less the politician and general?