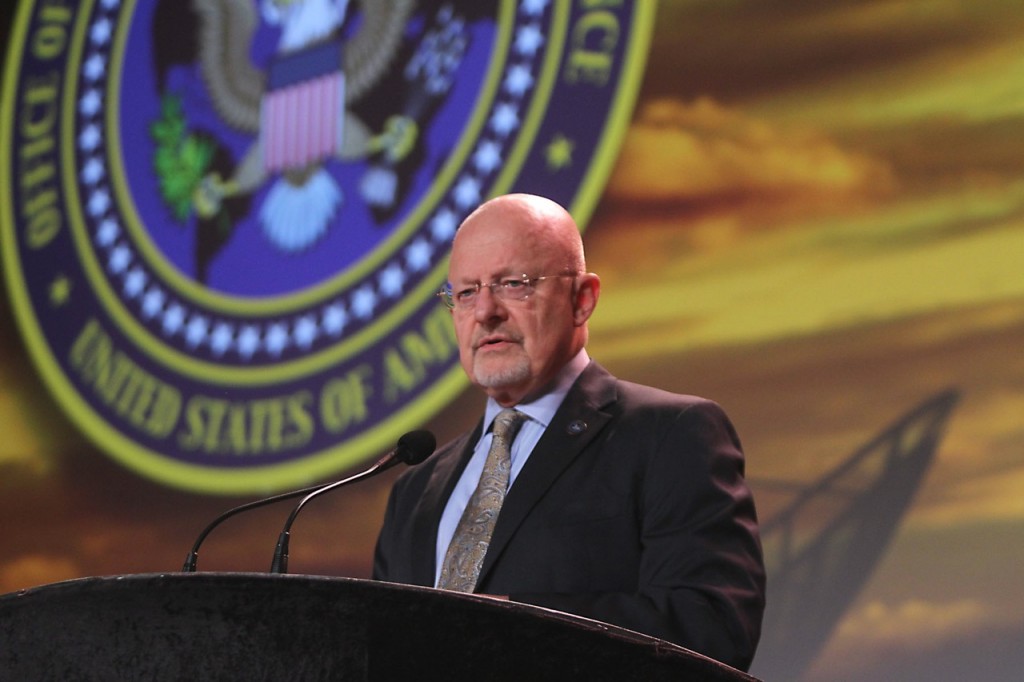 [ Editor’s Note: We thank Mr. Clapper for his “too little, too late” admission about a problem about which we already knew. But he left out telling about the CIA’s role in using terrorist proxies in US foreign policy for a long time. He cannot get by now with just telling us that “doo doo happens”.

We rarely have time here to listen through these Congressional testimonies to see if the Congresscritters grilled him with any tough questions, like “how many terrorist training camps are we supporting now?”, and “how many that we know about and could carpet bomb but do not, as that would breach an agreement we have with someone or kill US “security contractors” on the ground?

And no, I am not taking a cheap shot from the peanut gallery on a high official who inherited a problem structure that was in place when he came aboard.

Clapper has had a front row seat on this “problem” for a long time. Actually it is Mr. Clapper taking a cheap shot on us, attempting to get on the record that he “warned us” about a coming problem, like he had nothing to do with it.

Too much innocent blood had been spilled and is going to be spilled to let those responsible just walked away from this tragedy that has their fingerprints all over it. But in fairness this CIA terror problem began before he was at the helm.

Its early roots began when the CIA created the Palestinian religious radicals as an opposing force to the PLO, working with Israel to crank up the classic divide and conquer game of having the more secular PLO battle it out with the Islamic Jihad and Hamas. This includes birthing the big mass bombing tool.

The CIA wanted to knock off one of the big Islamic Jihadi leaders publicly to blame as a PLO hit, by blowing him up as he exited the mosque from Friday prayers. But his security team saved him by changing his routine and leaving by the back door, sending a decoy group out the front which was blown to pieces, with over a hundred dead and wounded.

The Lebanon CIA station chief, William Buckley, was kidnapped and tortured, I suspect to force him to reveal how deep a penetration had been made in their organization. It was a bloody time, where his captors even sent videos to the CIA of him being tortured. A revenge campaign of kidnappings and counter bombings, using any and all means began then, which continues today.

I have several hours of interview footage with Jerry Levin, the CNN Beirut chief, who was snatched off the street one morning on his way to work and who spent a year in captivity and was able to escape after a year in the Beqaa Valley.

Jerry converted to Christianity while chained to a radiator and having been given a bible to help pass the time. He and his wife Sis spent many years working with Christian Peace Makers. Jerry and Sis are two of the finest people I have ever met.

While Ted Turner and CNN wrote them off as collateral damage, Sis worked tirelessly behind the scenes to effect Jerry’s being allowed to escape. She wrote a book on the ordeal that was later made into a movie

These are the folks to went to places like the West Bank to serve as human shields, sleeping on the roofs of homes to stop the IDF’s nasty little habit of firing a tank shell or artillery round into villages as part of their “death roulette” game they invented to terrify the villagers. Almost no one knows what these brave people have done for so many years, walking the talk of their faith.

So thanks for nothing, Mr. Clapper. We will await your post-CIA book where you tell us what a disaster our use of proxy terrorism has been for the world and America. I might even buy it… Jim W. Dean ]

Director of US National Intelligence, James Clapper, has admitted that the United States is unable to “fix” the issue of terrorism in the Middle East, but says it is wrong for the US to leave the region.

Speaking to the Washington Post in an interview that was published on Wednesday, Clapper said eliminating terrorists in Iraq and Syria was not going to solve the issue.

“We’ll be in a perpetual state of suppression for a long time,” he said, adding that the US had no solution to the problem either.

“The US can’t fix it. The fundamental issues they have — the large population bulge of disaffected young males, ungoverned spaces, economic challenges and the availability of weapons — won’t go away for a long time,” he continued.

The US and its allies have been carrying out an aerial campaign against alleged terrorist positions inside Syria and Iraq since late 2014.

The spymaster rejected criticism of President Barack Obama for not leaving the Middle East, saying the US needed to stick around in the region for various reasons.

“I don’t think the US can just leave town. Things happen around the world when US leadership is absent. We have to be present — to facilitate, broker and sometimes provide the force,” he argued.

Over the recent years, Washington has sought increasing military presence in the Middle East and has waged wars against countries like Iraq and Afghanistan.

The US has also backed Western military intervention in countries like Syria and Libya, while providing political and military support to Arab monarchies in the Persian Gulf region.

Elsewhere in his remarks, Clapper referring to the fight against the Daesh Takfiri group, said the northern Iraqi city of Mosul, which fell to Daesh last year, was not likely to be freed before Obama leaves office.

“They’ve lost a lot of territory,” he told the Post. “We’re killing a lot of their fighters. We will retake Mosul, but it will take a long time and be very messy. I don’t see that happening in this administration.”

The Obama administration has made freeing Mosul a known objective in Obama’s last year of presidency, with Defense Secretary Ashton Carter pledging to “destroy the ISIL cancer’s parent tumor” in Iraq and Syria “by collapsing its two power centers in Raqqah and Mosul.”

Clapper, 75, has worked in intelligence for 53 years and has now served almost six years as America’s top intelligence official.