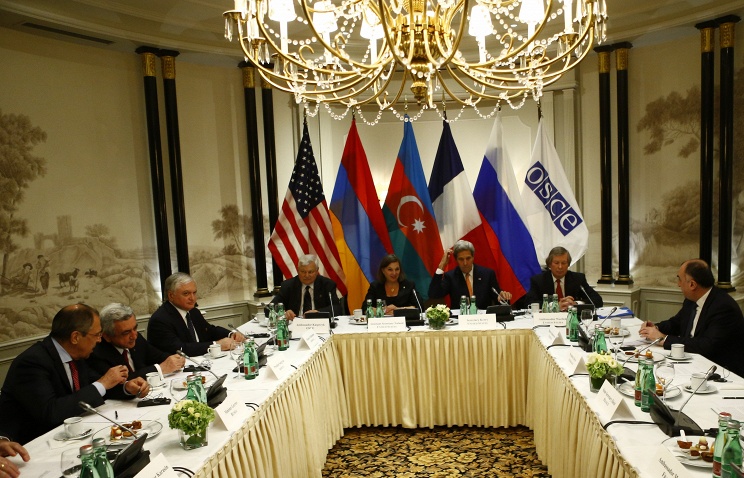 [ Editor’s Note: It’s always a good day when a needless conflict can be cranked down a notch. The agreement to go back to the previous 1994/95 accords is, simply put… pressing the reset button.

The OSCE can get between the forces so an outside party can keep a tally on ceasefire violations, which should be fewer with a troop pull back.

The loser here is Turkey, who had been egging Azerbaijan to go for a military solution when it has enough problems with the low oil prices turning its budget upside down.

On the same day, Iran and Azerbaijan announced they were proceeding with setting up a joint trade bank. This is a mechanism for cutting the outside banking system from interfering in trade settlements via sanctions. Partners in a bank just handle it all internally.

Needless to say, the banksters are unhappy to see the growth of these sanctions bullying firewalls. We will now see if the Azeris and Armenians can control their troops from killing each other for no good reason. The best solution is to send them back to their barracks and return to a border guard situation.

Our prayers are for the mothers of both sides who do not want to get the official notice that their son was the last killed in a stupid semi-conflict that settled nothing… Jim W. Dean ]

Minsk Group of the OSCE for settling the conflict in Nagorno-Karabakh has managed to reaffirm the observance of ceasefire in Nagorno-Karabakh on the basis of 1994/95 accords, Russian Foreign Minister Sergei Lavrov, U.S. Secretary of State John Kerry and French Minister of State for European Affairs Harlem Desir said in a joint statement as co-chairpersons of the group adopted upon the end of negotiations in Vienna.

They stated once against the absence of a military solution to the conflict. The document indicated that, for the purpose of reducing the risks of a continued violence, the Presidents of Serzh Sargsyan of Armenia and Ilham Aliev of Azerbijan had given consent to setting up within the shortest possible term a mechanism for investigation of incidents under the auspices of the OSCE.

The two Presidents also agreed to an expansion of the office of the envoy of the OSCE Chairman-in-Office and agreed to continue exchange of information on people missing in the conflict.

The latter exchanges should be held under supervision of the International Committee of the Red Cross with due account of the obligations the two Presidents undersigned at the October 2014 summit in Paris.

Lavrov, Kerry and Desir also confirmed Aliev and Sargsyan’s agreement on holding the next round of talks that has been scheduled for June. The venue will be coordinated on the basis of mutual consent.