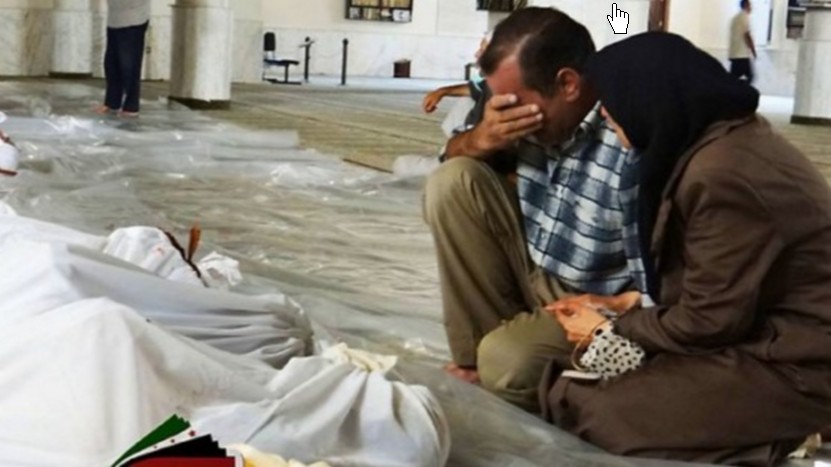 TEHRAN (FNA)- Vice-Chairman of the Syrian Journalists’ Union Mostafa Meqdad said that chemical plants in Iraq are producing chemical weapons for the terrorists in Syria, confirming the remarks by Russian President Vladimir Putin who had revealed the involvement of certain groups in Iraq in the production of such weapons.

“Russia is also aware that a plant which produces chemical weapons exists in Iraq and belongs to the terrorist groups,” Meqdad told FNA in Damascus on Saturday.

“Russia has announced that the Syrian government has not used such (chemical) weapons and stressed that the terrorists have used them in Syria, specially in Aleppo and Idlib,” he added.

His remarks alluded to Putin’s comments earlier this week that laboratories in Iraq are producing chemical weapons for the terrorists in Syria.

“We know that Opposition Fighters were detained on Turkish territory with chemical weapons,” Mr. Putin told a press conference in Lough Erne, Northern Ireland after meeting the leaders of the industrialized nations in a G8 Summit.

“We have information out of Iraq that a laboratory was discovered there for the production of chemical weapons by the opposition. All this evidence needs to be studied most seriously,” he continued.

Putin questioned the credibility of allegations by the US, UK and France that Syrian President Bashar Al-Assad’s forces had used chemical weapons, and attributed equivalent horrors to the forces supported by the West.

Putin’s remarks confirmed a detailed report by the FNA in May which said former Ba’ath regime officials are involved in the production and procurement of such weapons to the Syrian terrorists.

Early last month, informed sources told FNA that the innocent people killed in the Khan al-Assal area of rural Aleppo in Northwestern Syria were the victims of the chemical weapons supplied to the terrorists by a Saddam-era General working under head of the now outlawed Ba’ath party Izzat Ibrahim al-Douri.

“The chemical weapons used in the attack on Khan al-Assal area had been prepared by former Iraqi Military Industries Brigadier General Adnan al-Dulaimi and supplied to Ba’ath-affiliated terrorists of the Nusra Front in Aleppo through Turkey’s cooperation and via the Turkish town of Antakya in Hatay Province,” an informed source, who asked to remain anonymous for fear of his life, told FNA on May 6.

The source who has been an aide to Izzat Ibrahim – the most senior member of Saddam Hussein’s inner circle who is still on the run and heads the outlawed Ba’ath party after the apprehension and execution of Iraq’s former Dictator Saddam Hussein – defected from the group a few months ago, but holds substantiating documents on Izzat Ibrahim’s plans.

Gen. Adnan al-Dulaimi was a key man in Saddam’s chemical weapons production projects. After the fall of the dictator and when the Ba’ath party was divided into the two branches of Yunes al-Ahmad and Izzat Ibrahim, he joined the latter group and was deployed in Northwestern Iraq, which is a bastion of Ba’ath terrorists, to produce chemical substances.

“The 80mm mortar shells which landed in Khan al-Assal and killed dozens of people were armed with the latest product of Dulaimi’s hidden laboratories sent to the Nusra members for testing,” the source added.

“Also at his order, several former Iraqi military industries engineers trained the Syrian terrorists on how to use these chemical weapons,” the source said, adding that all plans in this connection were prepared by Adnan al-Dulaimi and staged after the approval of Izzat Ibrahim.

The chemical mortar shells, which the source said were fired at Khan al-Assal from the Nusra-ruled Kafr Dael in Northwestern Aleppo, contained a chemical substance very familiar to the Iraqi Ba’ath party leaders, Sarin nerve gas. Adnan Dulaimi and his Ba’athist colleagues in Iraq’s military industries mass-produced the same lethal gas and used it in vast areas against the Iranian troops in the 1980-1988 war and eventually killed thousands of people in the Kurdish town of Halabcheh with the same chemical agent.

UN human rights investigators announced just a few hours ago that they have testimony indicating Syrian rebels have used Sarin gas. Interviews with victims and doctors have provided “strong, concrete suspicions” that rebels used the deadly nerve agent, according to a lead investigator, who also stressed that there’s no evidence yet that the Syrian military used Sarin.

“Our investigators have been in neighboring countries interviewing victims, doctors and field hospitals and, according to their report of last week which I have seen, there are strong, concrete suspicions but not yet incontrovertible proof of the use of Sarin gas, from the way the victims were treated,” member of the UN independent commission of inquiry on Syria Carla Del Ponte said in an interview with Swiss-Italian television.

“This was use on the part of the opposition, the rebels, not by the government authorities,” she added, speaking in Italian.

The United Nations independent commission of inquiry on Syria has not yet seen evidence of government forces having used chemical weapons, which are banned under international law, Del Ponte said.

The chemical attack on Khan al-Assal came after a video footage posted on the internet late in January showed that the armed militants in Syria possessed canisters containing chemical substances.

The foreign-sponsored militants had earlier released footage in which rabbits were killed by inhaling poisonous gas.