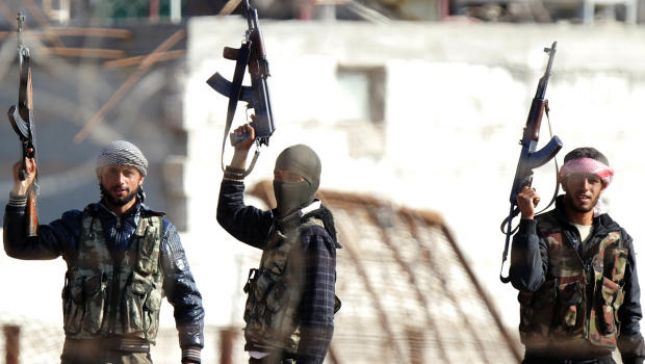 TEHRAN (FNA)- Most Salafi rebels fighting in Syria are Afghan nationals infiltrating Syria via the borders with Iraq, a senior Syrian military source revealed on Saturday.

“Afghans affiliated to the al-Qaeda constitute over 65% of the Jihadi Salafi groups in (the Syrian province of) Deir Ezzor and they have come to Syria from Iraq,” the military source told FNA on the condition of anonymity.

“The Syrian army’s intelligence displays that these Jihadi Salafis have been trained by the terrorist al-Qaeda organization and have infiltrated into Syria through Iraq after passing some necessary training courses,” the source added.

Reports had also earlier revealed that Turkey’s national air carrier, Turkish Air, has been transiting Al-Qaeda and Taliban militants from North Waziristan in Pakistan to the Turkish borders with Syria.

“The Turkish intelligence agency sent 93 Al-Qaeda and Taliban terrorists from Waziristan to Hatay province near the border with Syria on a Turkish Air Airbus flight No. 709 on September 10, 2012 and via the Karachi-Istanbul flight route,” the source told FNA in September, adding that the flight had a short stop in Istanbul.

The 93 terrorists transited to the Turkish border with Syria included Al-Qaeda militants from Saudi Arabia, Kuwait, Yemen, Pakistan, Afghanistan and a group of Arabs residing in Waziristan, he added.

FNA dispatches from Pakistan said new al-Qaeda members were trained in North Waziristan until a few days ago and then sent to Syria, but now they are transferring their command center to the borders between Turkey and Syria as a first step to be followed by a last move directly into the restive parts of Syria on the other side of the border.

The al-Qaeda, backed by Turkey, the US and its regional Arab allies, had set up a new camp in Northern Waziristan in Pakistan to train Salafi and Jihadi terrorists and dispatched them to Syria via Turkish borders.

“A new Al-Qaeda has been created in the region through the financial and logistical backup of Turkey, Saudi Arabia, Qatar and a number of western states, specially the US,” a source told FNA in September.

Ali Mahdian told FNA that the US and the British governments have been playing with the al-Qaeda through their Arab proxy regimes in the region in a bid to materialize their goals, specially in Syria.

He said the Saudi and Qatari regimes serve as interlocutors to facilitate the CIA and MI6 plans in Syria through instigating terrorist operations by Salafi and Arab Jihadi groups, adding that the terrorists do not know that they actually exercise the US plans.

“Turkey has also been misusing extremist Salafis and Al-Qaeda terrorists to intensify the crisis in Syria and it has recently augmented its efforts in this regard by helping the new Al-Qaeda branch set up a camp in Northern Waziristan in Pakistan to train Al-Qaeda and Taliban members as well as Turkish Salafis and Arab Jihadis who are later sent to Syria for terrorist operations,” said the source.

He said the camp in Waziristan is not just a training center, but a command center for terrorist operations against Syria.

Yet, the source said the US and Britain are looking at the new Al-Qaeda force as an instrument to attain their goals and do not intend to support them to ascend to power, “because if Salafi elements in Syria ascend to power, they will create many problems for the US, the Western states and Turkey in future”.

“Thus, the US, Britain and Turkey are looking at the Al-Qaeda as a tactical instrument,” he said, and warned of the regional and global repercussions of the US and Turkish aid to the Al-Qaeda and Salafi groups.

“Unfortunately, these group of countries have just focused on the short-term benefits that the Salafis and the Al-Qaeda can provide for them and ignore the perils of this support in the long run,” he said.

“At present, the western countries, specially Britain which hosts and controls the Jihadi Salafi groups throughout the world are paving the ground for these extremists to leave their homes – mostly in Qatar, Saudi Arabia, Kuwait and the Untied Arab Emirates (UAE) as well as those who live in Europe and the US – for Waziristan,” the source added.

Syria has been experiencing unrest since March 2011 with organized attacks by well-armed gangs against Syrian police forces and border guards being reported across the country.

In October 2011, calm was eventually restored in the Arab state after President Assad started a reform initiative in the country, but Israel, the US and its Arab allies are seeking hard to bring the country into chaos through any possible means. Tel Aviv, Washington and some Arab capitals have been staging various plots in the hope of stirring unrests in Syria once again.

The US and its western and regional allies have long sought to topple Bashar al-Assad and his ruling system. Media reports said that the Syrian rebels and terrorist groups have received significantly more and better weapons in recent weeks, a crime paid for by the Persian Gulf Arab states and coordinated by the United States.

The US daily, Washington Post, reported in May 2012 that the Syrian rebels and terrorist groups battling the President Bashar al-Assad’s government have received significantly more and better weapons in recent weeks, a crime paid for by the Persian Gulf Arab states and coordinated by the United States.

The newspaper, quoting opposition activists and US and foreign officials, reported that Obama administration officials emphasized the administration has expanded contacts with opposition military forces to provide the Persian Gulf nations with assessments of rebel credibility and command-and-control infrastructure.

Opposition activists who several months ago said the rebels were running out of ammunition said in May 2012 that the flow of weapons – most bought on the black market in neighboring countries or from elements of the Syrian military in the past – has significantly increased after a decision by Saudi Arabia, Qatar and other Persian Gulf states to provide millions of dollars in funding each month.