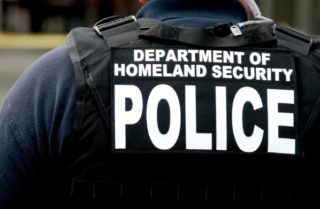 Few Americans know what they have lost. Few understand to what extent they have been victimized by something far beyond a police state, far beyond simple surveillance, far beyond the obvious loss or rights and privacy that some accepted so readily less than two decades ago in order to “be safe.”

At the center of it all is the Department of Homeland Security, a shadowy bureaucracy tasked with examining every aspect of the lives of every American and producing a “threat profile” using a “predictive algorithm. “

While Americans worry about their gun purchases being tracked and cataloged, they have no idea what has already been done and there’s over 700,000 government “agents,” from border control to “TSA” to local police including 41 “other” agencies of which only 16 have recognizable acronym titles anyone has ever heard of.

Americans know their email and phone calls are listened to but what they don’t know is how social scientists at a dozen universities, working for agencies like the DHS, Department of Defense, NSA and DARPA have learned to handle “big data.”

“Big Data” is the bulk of information that is “out there,” pulled from the internet, stolen from the airwaves, including Wi-Fi intercepts, VOIP or internet based mobile phone networks, satellite and cable television viewing patterns and social network patterns.

To this frightening “big data” base is added commercial credit reports, credit card and banking transactions now simply for the taking under counter-terrorism “money laundering” laws and every purchase, every foot, every mile of travel while in possession or accompanied by a “navigation device” or “location service” enable phone.

Americans once felt safe because they thought the government would never be able to handle tens of billions of phone calls, a trillion Facebook posts and billions of doctor’s bills and prescription medication purchases.

They were wrong, thanks to the world of super computing and the endless billions spent on hiring the best and brightest of those Edward Snowden has tried so hard to warn us about.

What do they know?

“They,” and we will get to who “they” are, know everything. They can’t legally get your medical history, but their access to the drugs you buy and the doctors you see, including the background and specialty of those providers, tells them everything about you — whether you are sick, whether you are receiving psychiatric care, whether you are pregnant and quite probably who the father is, even when you may not know it yourself. If only I were kidding. This is how “big data” works.

They see where you drive, how often your car is maintained, when you get up, when you go to sleep and nearly everything you do in-between.

What does this really mean, why would they want this?

We ask this ourselves, we only know they are not only getting this information but they are putting it out there, available to agencies of all kinds, not just the folks who search your bags at the airport, or that customs agent who looks at you funny when you claim you have “nothing to declare.”

The problem is, they don’t just stop at collection, which you always knew they were doing. Where the greatest strides in “big data” are is in social networks.

Their goal, based on specialized predictive software, is to not only know what you think but to figure out what you will do.

They want to know, we believe, because they may well be planning, perhaps not too far in the distant future, to stop you from doing what you do or even more likely take action, perhaps violent action, because of how you think or feel.

This is exactly the kind of information that the FBI and CIA are getting now, information being churned out, distributed around, and hung around your neck under the title of “predictive threat profile.”

It isn’t just chemtrail and GMO types or “anti-vacc” folks, though those are at the top of the list. Some of the predictive profiles are targeting potential community leaders or “activist types” for potential mass detention.

All of it is real, it exists now, and a generation of Americans who equate “patriotism” with the moral flexibility typically attributed to Nazi concentration camp guards stand ready in the wings, hundreds of thousands of them, to drop the hammer as it were.

Americans did it to themselves. When American drive cars, they are subjected to “check lane” searches where they are questioned, “grilled,” insulted and even threatened. Americans who own boats are regularly subjected to “safety inspections” that entail drug sniffing dogs and hours of waiting while explosive detection swabs are driven to distant labs for analysis. Yes, this really happens.

Americans who travel by air see their bags opened, their children’s “private areas” poked and patted down, and more recently, their electronic devices not only powered up but are demanded to surrender their passwords so their email can be read.

The same Americans who occupied Iraq and Afghanistan, the torturers, the idiots who threw hand grenades at groups of school children as they sped by in their Strykers and Humvees, the contractors who cavorted with “dancing boys” by the light of the moon, these are the chosen who now rule America.

What do we mean by rule? Let us be very clear about this, there has been a gross deterioration of human rights, of rule by law and even of civility and common sense in America since 9/11.

When a hapless congress and a supreme court long bought off by organized crime rubber stamped draconian legislation legalizing torture, suspending habeas corpus and providing blanket funding for a decade of drug and oil wars, the few that spoke out were sorry they did.

Long forgotten are the dozens of generals fired or retired or the journalists who were blackballed as “terrorist sympathizers” or “anti-Semites.”

A generation of Americans, perhaps thanks to alternative media and even the candidacy of Donald Trump, are beginning to awaken to at least part of the problem. Still, too few are standing up to police shootings and fewer still are concerned that two million Americans are incarcerated in dungeon-like conditions, many for drug or economic crimes, imprisoned for profit and placed in the hands of “corrections corporations” by a “bought and paid for” justice system.

First they came for the Socialists, and I did not speak out—
Because I was not a Socialist.

Then they came for the Jews, and I did not speak out—
Because I was not a Jew.

Then they came for me—and there was no one left to speak for me.

I tend to think of Niemoeller when I am told to fear Russia and China or to live in fear of Iran’s imaginary nuclear weapons program. When you look at what is being done, what has already been done by “big data,” the “bread and circuses” phony elections, the imaginary terror threats and the endless hysteria drummed up by the media becomes clear.

What has to be recognized and identified is the “they,” those empowered to know all, and eventually, we fear, “drop the hammer.” Who is “they?”

To answer that we only need to look in our own hearts, find those dark recesses of ignorance and fear that a lifetime of learning and enlightenment is intended to elevate us from. From there, we look to those who reject those values — human decency, understanding and compassion.

These are the blank eyes you look into, far too often, the eyes of what America has done to itself.