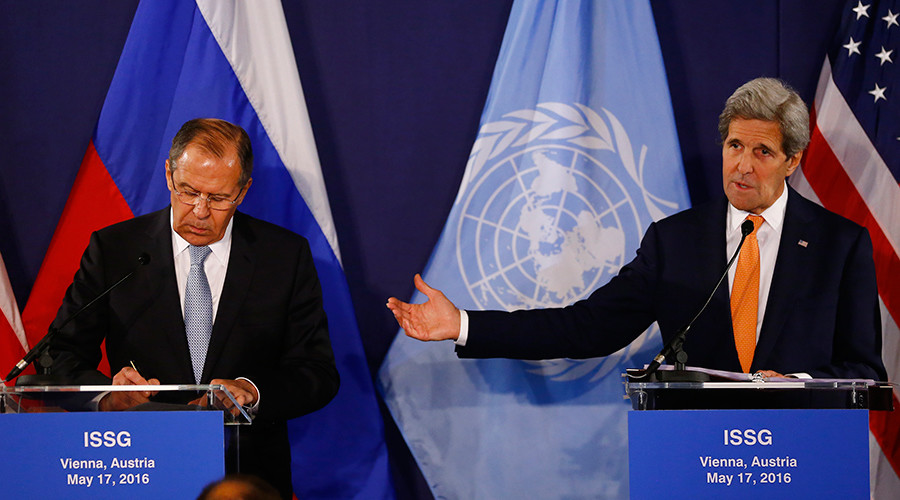 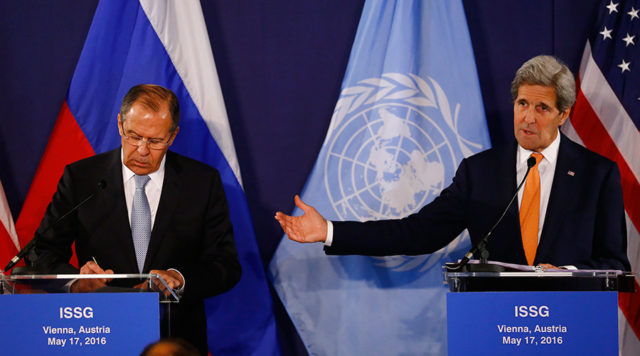 [ Editor’s Note:  We have some important news today coming from the statements of the main players, particularly Kerry. He has clearly responded to the continued pleas from Lavrov as to the failure to reign in the loose cannons among the terrorist opposition group.

Kerry acknowledges below that “bad actors” are involved in the process that signed up to seek a solution but are have been undermining the process to the best of their abilities.  Add to that his insistence that the opposition stop working from IS and al-Nusra.

This is a public admission from the highest US official that they have been doing that, and something that the Saudis and Turks will not notice. But the $64,000 question is what is the US coalition leader going to do to bring its wayward members into line? So far we have seen nothing done.

We are way past time to be naming names, especially Turkey, as the fighter, ammo and advance weapons that have flowed across the border while Russia has reduced its air attack capacity has stalemated much more progress having been made against the jihadis.

One has to ask if this was not exactly what the US wanted as part of twisting Syria in the wind with Assad refusing to step down…with the US tit for tat the it would continue making sure the terrorists hold a good chunk of Syrian territory.

The threat to NE Syria has tied down Syrian forces that could have done more in Deir-Ezzur and Raqqa.

This makes me wonder that the US wanted those western advances slowed down to give it time to strengthen the opposition forces, of that more of the territory taken from IS and al-Nusra still remains under US opposition control during the negotiation process for leverage.

That in effect has put the US in the position of undermining the peace process itself, which I have no hesitation in saying. By not calling out Saudi Arabia and Turkey to stop supporting the designated terrorist groups has effectively put the US stamp of approval on their actions, making the US a “bad actor” as Kerry was referring to. You just can’t make this stuff up… Jim W. Dean ]

Russian Foreign Minister Sergey Lavrov and US Secretary of State John Kerry have stated that there is progress in Syria peace talks after a meeting in Vienna, also saying that the powers there agreed to turn the Syria truce into a real ceasefire.

“I see the confirmation of the entire basis that our work is based on as the main result of today’s International Syria Support Group (ISSG) meeting. That is the joint statement of the ISSG and the resolutions of the UN Security Council numbers 2218, 2254 and 2268,” Lavrov said.

“I’d like to stress that we’ve made progress in all directions of our work, namely the cessation of hostilities, the expansion of the humanitarian assistance and the political process,” he added.

John Kerry also announced that the ISSG sees progress in the situation, stating, however, that specific actions should be taken to make real changes.

“We moved the ball forward. [But] to make all of this more than words on a page, some determined actions will have to be taken to make it happen. No one can be remotely satisfied with the situation in Syria,” Kerry said.

Lavrov said that the level of violence on the ground in Syria has gone down significantly, while humanitarian access has improved in many parts of the country.

As for the political process, Lavrov noted that there had been another round of talks concerning the political transition, giving the grounds for another meeting.

Kerry outlined the areas that the group will focus its actions in the near future, particularly intensifying efforts to make warring parties stop all violence and to ensure that the opposition disassociate themselves from Islamic State and Al Nusra extremists. The agenda also includes expanding the delivery of humanitarian aid and facilitating agreements between various sides in Syria for the mutual release of detainees.

The secretary of state also noted that the peace process was endangered by “bad actors,” or parties who pledge support for the cessation of hostilities and at the same time ally themselves with violent factions when they choose to.

“The peace is endangered by irresponsible actions of those who seek a different outcome [to the peace process]. They’re actors on both sides,” Kerry said.

“The stakes are too high and the conflict is too long [to succumb to] bad actors or avoid consequences for sides who have an agenda different from that of reaching an agreement and trying to make peace.”

He said the members of the ISSG agreed that if a party to the cessation of hostilities does not comply, it can be reported to the monitoring group and be excluded from the peace process.

“In order to bring an end to the conflict in Syria, those involved in the conflict, with conflicting agendas, will have to prioritize peace,” Kerry added.

The powers in Vienna, however, failed to agree on a new date for peace talks between the warring sides in Syria, Staffan de Mistura, the UN special envoy to the country, said in a joint press conference with Kerry and Lavrov.

“Intra-Syria talks are still in progress,” De Mistura said. “The issue is still waiting for some type of concrete outcome of this meeting, but we cannot wait too long, we want to keep the momentum.” He added that peace talks “will become credible when there is credible cessation of hostilities and credible humanitarian aid” delivery.

Tuesday’s talks authorized air drops to improve the humanitarian situation and outlined the locations where aid deliveries are to be made.

The meeting of the ISSG group lasted for over five hours. Previously, ISSG members met in Munich, Germany, in February. At that time, the various sides agreed to work for a reduction of violence in the region, which is supposed to turn into a full ceasefire within a week’s time. The truce, however, does not include organizations which are considered terrorists by the UN Security Council.