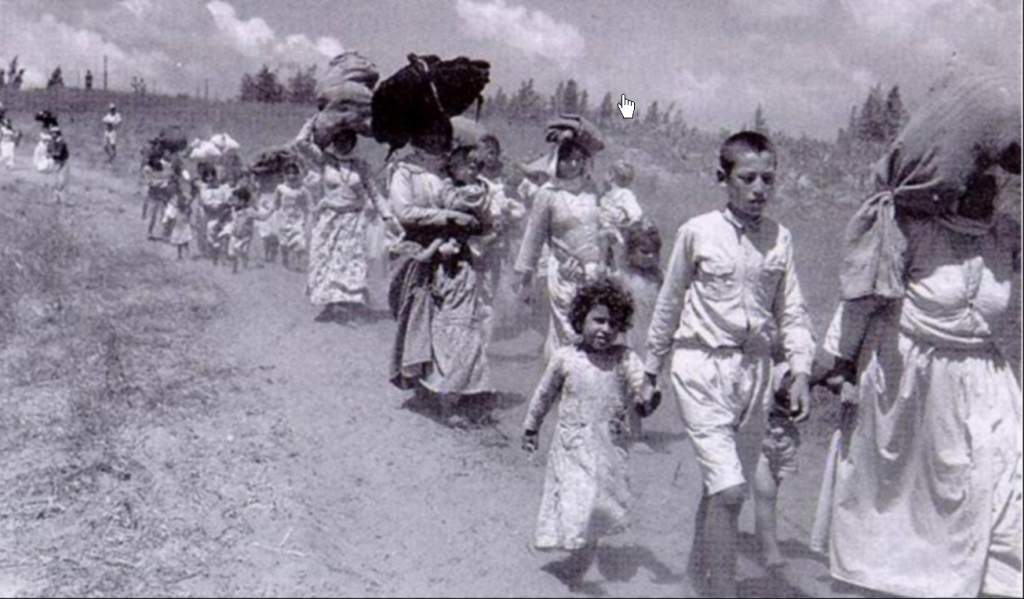 Al-Nakba is an Arabic term that means the deliberate infliction of a catastrophe on a nation. This term is usually used to refer to the brutal Zionist occupation of Palestine. Sixty eight years ago, in 1948, Zionist Jewish terrorist gangs forcibly occupied the most fertile parts of Palestine, razed to the ground more than 500 Palestinian towns – with their homes, businesses, schools, churches and mosques -, perpetrated at least 50 collective massacres against Palestinian civilians including especially women and children, and forcefully evicted about 800,000 Palestinians out of their homeland, making them refugees living under the mercy of UNRWA.

Al-Nakba is a Zionist military scheme meant to be executed in stages throughout time until the Zionist project of Greater Israel from Nile to Euphrates is accomplished. This scheme was originally envisioned three thousand years ago by the Judaic Talmudic Pharisees, but was not executable until mid-nineteenth century. Although the first stage of the Nakba has officially started in 1948 with the Zionist occupation of Palestine, it actually started, although covertly, years before this date with the gradual immigration of Zionist Jews to Palestine, and with the Jewish Fund purchasing land from the Ottoman feudal occupiers and the evictions of Palestinian farming communities working this land.

The second stage of the Nakba started in 1967 with what is known as the Six-Days War, when the terrorist state of Israel occupied the rest of Palestine, the Sinai and the Golan Heights. At the time evacuation orders drove 400,000 more Palestinians out of their towns into more refugee camps out of their home land. This Judaic cleansing of Palestinians is still going on in many different forms including the theft of Palestinian land for Zionist Jewish settlements (colonies), the routinely on-going demolitions of Palestinian homes especially in Jerusalem and its suburbs, the revocation of residency rights and deportations of Palestinians, the Zionist extremist settlers’ forced occupation of Palestinians homes under the protection of Israeli armed forces and eviction of Palestinian families out, the brutal military operations into several Palestinian cities, the daily murder of Palestinian children by Israeli soldiers, and the inhumane starving siege and the periodic bombardments of the Gaza Strip.

The third stage of the Nakba, which was directed against Lebanon was a failure, since Israel could not expand further north despite all the destruction inflicted on Lebanon.  Israel had carried many military campaigns against Lebanon. Israel financed and armed Lebanese Maronite military factions to fight PLO and Palestinian camps in Beirut. This incited a civil war that lasted 25 years, from 1975 to 1990, causing a huge devastation to Lebanese infrastructure and the death of an estimated 250,000 people.

Israel did not stay idle during the time, but invaded Southern Lebanon several times. In 1978 Israel invaded southern Lebanon but pulled out after establishing a border buffer zone within Lebanese area when a U.N. peacekeeping force was deployed to the area. A wider scale Israeli invasion of Lebanon took place in 1982 that eventually led to the evacuation of the PLO from Lebanon under the supervision and protection of the American and French Multinational Force in Lebanon, who established their own barracks in Beirut.

Yet when Israel and the Multinational Force did not leave the country Lebanese formed a resistance movement, later known as Hezbollah, and carried operations against the occupiers. The American/French Multinational Force withdrew from Lebanon after the April 1983 suicide bombing of the American Embassy and barracks and the October 1983 bombing of the French Drakkar barracks. Israel eventually withdrew from southern Lebanon in 2000 but kept the Sheba’a Farms; a border part of southern Lebanon. Israel again launched a 34 day war against Lebanon in 2006 in an attempt to destroy Hezbollah, but faced strong resistance and suffered high casualties.

The fourth stage took place in Iraq in 2003 when the U.S. invaded and devastated the country. Iraq was a major military power in the region. With strong economy and advanced industry Iraq posed a threat to Israel. Tired of the many wars the Israeli army had waged against Palestinian resistance and against Lebanon, Israelis started looking for a proxy army to fight its wars. What is a better army to fight Israel’s wars other than the American army!

Many scientific, military and political investigations point to the fact that Israeli Mossad agents and Zionist American Neocons perpetrated the 911 attacks. The attack was needed to justify American “wars on terror” in the Middle East, specifically against Iraq. Iraq’s infrastructure and industry were destroyed by the American army. Iraqis suffer their own version of Nakba with a very conservative count of 500,000 killed according to the Huffington Post. The real number of killed people could never be known especially when nobody cared to count the casualties. The use of DU (depleted uranium) by the American forces is still causing high rates of death and infant deformation. Almost 4,000,000 Iraqis became refugees; half within Iraq while the other half in the neighboring countries. The fighting is still going on in Iraq through Israeli/American proxy terrorist groups such as ISIS. This was war for Israel.

The fifth stage of the real Nakba was conceitedly called the Arab Spring. This was a heinously satanic plan to have Israel’s enemies fight each other in internal sectarian civil wars. This requires the U.S. to sacrifice a couple of the Arab dictators it had supported for a long time in order to give the population the illusion that change is possible.  This Arab Spring started in Tunisia in December 2010 getting rid of Zine El Abidine Ben Ali, then followed by Hosni Mubarak of Egypt. These staged revolutions eventually produced as bad dictators. Real popular demonstration/revolutions in other Arab states were brutally crushed and oppressed, especially in Bahrain and Yemen that were crushed by Saudi forces. The Saudi war against Yemen is still going on until today.

This Arab Spring was used to stage revolution against Libya’s Gadhafi, who proposed a golden Dinar as a new African currency. Israel and the U.S. with the cooperation of Qatar shipped al-Qaeda terrorists to Libya, financed and armed them to devastate the country.

The real target of the Arab Spring was Syria, who during the 2006 Israeli war against Lebanon, had shipped weapons to Hezbollah. Robert Ford; the US Ambassador to Syria between 2011 – 2014, was the architect and financier of the rebellion demonstrations against Syrian regime. When these demonstrations did not succeed due to popular support to Al-Assad regime, mercenaries and terrorists were brought in from all over the world including European countries to form terrorist groups such as Al-nusra Front and ISIS to destroy Syria. Robert Ford still insists, contrary to all evidence, that these terrorists are “… moderate and democrats seeking to change Syria’s autocratic system” justifying his financing and arming these terrorists.

These Israeli/American/Qatari/Saudi/Turkish financed and armed terrorist groups had destroyed much of Syria, murdered hundreds of thousands of Syrian civilians, and drove out of the country almost four million Syrians causing a huge refugee crisis. These refugees were abused, taken advantage of, and manipulated to immigrate to Europe.

This is the real Nakba that is hitting one Arab country after the other destroying cities, creating chaos, and causing a huge influx of refugees; people evacuating their own country out of fear for their lives. Ruined, weakened and almost evacuated from large part of their populations, Arab countries bordering the terrorist state of Israel would not be able to stop Israeli expansion to accomplish the Zionist dream of Greater Israel.

The real Nakba is the Arab Nakba and the Palestinian Nakba is just a part of it.