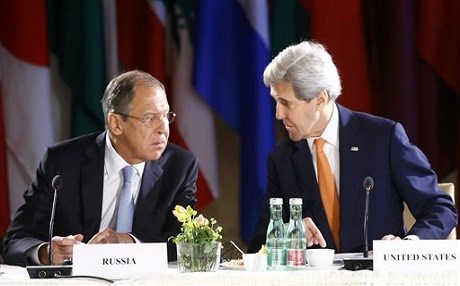 By Rudaw 9 hours ago

ERBIL, Kurdistan Region—The US and Russia have harsh words for those who may be sabotaging the Syrian peace process, yet they still believe peace is “possible.”

Kerry stressed that all of the parties to the conflict “have agreed on a basic framework” for a transitional governing body that would create a united, non-sectarian Syria. “It’s possible,” he said to reduce the violence in Syria, provide humanitarian aid, and find common ground for a political transformation.

“The challenge that we face now,” Kerry noted, “is to transform these possibilities into the reality of an agreement, at some point.”

Kerry’s comments were made at a joint press conference on Tuesday held with Russian Foreign Minister Sergei Lavrov and UN Special Envoy Staffan de Mistura, following a meeting in Vienna of the International Syria Support Group (ISSG), which Russia and the United States co-chair.

While the leaders expressed hope that progress would continue to be made, they also had warnings to those who may be sabotaging the peace process.

The “fragile” gains they have made in Syria, Kerry noted, are “increasingly threatened by irresponsible and dangerous actions taken by those who would rather have this effort fail, who want to create problems because, rather than solutions, they seek a different outcome.”

“And there are frankly actors on both sides who we think make that choice. And the stakes are too high and this conflict has gone on too long in order to succumb, and in order to allow all of those nations at that table to be sucked down into a veto of one or two individual actors who want a different outcome. We can’t give vetoes to bad actors or avoid consequences for any sides’ actions who have an agenda that is different from that of reaching an agreement and trying to make peace.”

The representatives at the ISSG affirmed their commitment to transforming the cessation of hostilities into a full ceasefire, agreeing that the parties of the ISSG will use their influence to ensure compliance.

The ISSG also added teeth to their partnership, vowing to take action if a party fails to comply with the ceasefire.

Kerry noted that they did discuss enforcement mechanisms for dealing with those who violate the ceasefire or who block the delivery of humanitarian aid.

Russia reiterated its commitment to work with the Syrian regime to stop aerial bombardments of civilians and parties of the ceasefire.

De Mistura, who is leading talks in Geneva on a political transition in Syria, said he wants to keep the momentum coming out of the ISSG talks. He said that the Geneva talks only become credible when there is real progress on a ceasefire and humanitarian issues.

“None of us, not one, can be remotely satisfied with the situation in Syria,” concluded Kerry. “It’s deeply disturbing. And we are all concerned about the levels of violence that broke out in recent days challenging the cessation.”

“In order to make all of this more than words on a page, some very clear and determined actions are going to be needed in order to implement the steps that we just set out today.”