“Now remember, when things look bad and it looks like you’re not gonna make it, then you gotta get mean, mad-dog mean. ‘Cause if you lose your head and you give up then you neither live nor win. That’s just the way it is.” ~ Outlaw Josey Wales 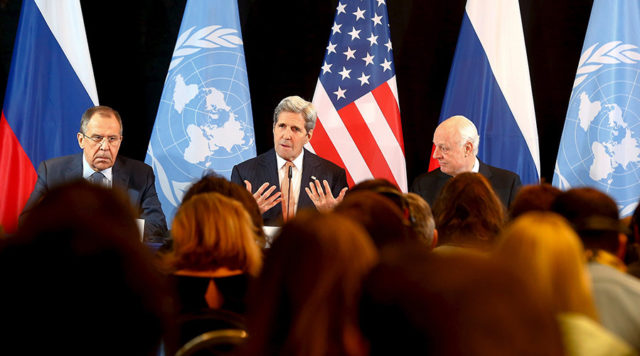 The big US coalition meeting last week in Paris was another day of spinning the Syrian ceasefire game wheel to see who will comply and who won’t. Short term local ceasefires have been applied like chewing gum and bailing wire to hold it together up to now, but with only 48 more hours put on the meter.

While the combat lines seem to be ever changing, the political and media battle lines seem to be carved in stone. Western politicians will say one thing, then then do another, or do nothing at all. And Western media sticks to its script of blaming Assad for anything and everything it can, no matter how biased and ridiculous the charges.

The outcome of the Paris  talks had Russia and the US agreeing to push for a nationwide ceasefire. But that seemed to be diplomatic theater, as the US does not seem to have control over what either the Saudis or Turks do with curtailing their support for both the terrorists and moderate opposition groups they arm and supply.

The joint US and Russian statement did say they would work toward mapping out where the Islamic State and al-Nusra controlled areas exactly were, so they could jointly agree which areas were open for attacks. But there is a glaring problem with this. We are ten weeks into the ceasefire, and Russia has been asking the US to coordinate doing this, and has been refused.

Geopolitical readers of the Syrian conflict can well remember how the US strummed the endless whiney tune of, “the Russians are just bombing the moderate opposition to support Assad, and ignoring ISIL”. This was a complete hoax of course, but the White House, Pentagon and State Department all kept repeating the lie, when everybody knew it was a lie. Why?

All that any of us embarrassed Americans could think of is that they could not think of anything else to say to discredit the successful counter terrorism campaign that was rolling forward every day, showing up the US coalition effort for the fraud that it was. The US spinmeisters were desperate to tarnish the Syrian coalition success.

John Kerry emphasized in his closing remarks that words would not matter unless they were followed up by actions on the ground by both sides, and that the US, Russia and Iran should pressure their respective proxies to not disrupt moving the peace process forward. That seemed like a bad joke.

Lavrov and the Russian Syria commander have been reporting for weeks about the constant flow of high tech weapons, fighters and logistical supplies coming in from Turkey, Saudi Arabia and even Jordan. The Jordanian arms flow has been enough for the opposition groups located outside Damascus to have enough ammo to fight over territory among themselves.

Erdogan has had his MIT Intel chief keeping the Idlib and Aleppo jihadis so well supplied that they went over to the offensive in Aleppo against the Syrian Arab Army in some hard fought battles with heavy casualties on both sides, including the Iranians taking their heaviest losses to date.

As a smokescreen to keep the focus off of who broke the ceasefire by supporting the new offensive, we began to get the daily manufactured reports of Assad bombing civilians, hospitals, and even a refugee camp of tents, clearly visible as such from the air.

Western media joined this smear party by republishing every report that came out charging Assad with horrible crimes, but not bothering to provide any proof, when the US has drones and satellite photos pinpointing locations of attacks. Also, both the Russia and the US know everything that flies over Syria.

The Russian and Syrian denials were generally ignored in the West. The most outrageous faked report was the maternity hospital in Aleppo being bombed, which the Russian cmdr. shot down in flames.

He showed a recent drone photo confirming the damaged hospital, and then showed a satellite photo of almost a year earlier showing the exact same damage. And yes, this news was ignored in the West, too.

Iran was even called upon to help Russia restrain Assad, who according to Western news reports, has been wasting his Air Force by having it bomb innocent civilians, hospitals and refugee camps.

Lost in all the smoke and mirrors and counter claims is that the ceasefire had made a lot of progress except in the northern Syrian areas where al-Nusra forces are mixed in with a variety of so-called moderate rebels.

I cannot let the gutless UN spokespeople off the hook for this mass disinformation campaign. Its people also accepted and promoted all unsubstantiated charges of Syrian bombing attacks on civilians with no independent investigation whatsoever.

This the same United Nations, mind you, where the words “state-sponsored terrorism” are never uttered in a public context, despite the appalling carnage that has been inflicted by the “terrorists with sovereign immunity”. This is the same UN that went on a “don’t bomb hospitals” campaign last week, when it did a similar campaign last year with the French doctors’ group making a big splash with their ten or so hospitals allegedly bombed by Assad.

But the studious Russian air cmdr. got his satellite photos out and proved that most of the hospital locations given were bogus. They never existed. It was just another Intel and media psyop to smear the Assad regime, and one where most independent Intel people believe the French doctors’ NGO had to be in cahoots with French Intelligence to have had the gall to attempt such a fraud.

The world public is suffering from another form of terrorism, which mass media conveniently does not cover because it is involved. And that is the terrorism of lies that we live under constantly in the geopolitical arena where our phony free press inflicts no punishment on the reputation of the state perpetrators.

But it gets worse, as VoltaireNet shared with us this week. There are huge numbers of terrorist attacks in which Western media has a limited interest, and the UN, also. They are the ones that have been inflicted on the Syrian people by both Western-sponsored terrorist groups, and their pet opposition murderers. VNet calculated 120 such attacks between January 1 and February 27th of this year that got little to no mention.

For some good news, I turn to German Foreign Minister Frank-Walter Steinmeier saying last week that despite the problems with the ceasefire, it had accomplished more in the last few weeks than had been done in the past five years. I thought that was most statesmanlike, and sorely needed.

The big mystery in all this is why isn’t the EU more concerned with the refugee surge being such a long term destabilization problem?

And the longer the Syrian and Iraqi proxy terror wars go on, the more combat-trained angry jihadis there will be when it is finally over, and they might all decide to go to Europe.

You would think the Europeans would be moving heaven and earth to help get the Syrian war over with, Assad or no Assad… but they aren’t. What else could it be other than just horribly incompetent leadership?

Why do EU protests only draw a few thousand, when their whole world is at stake? It reminds me of the famous Hemingway book title, “Ask not for whom the bell tolls. It tolls for thee.”