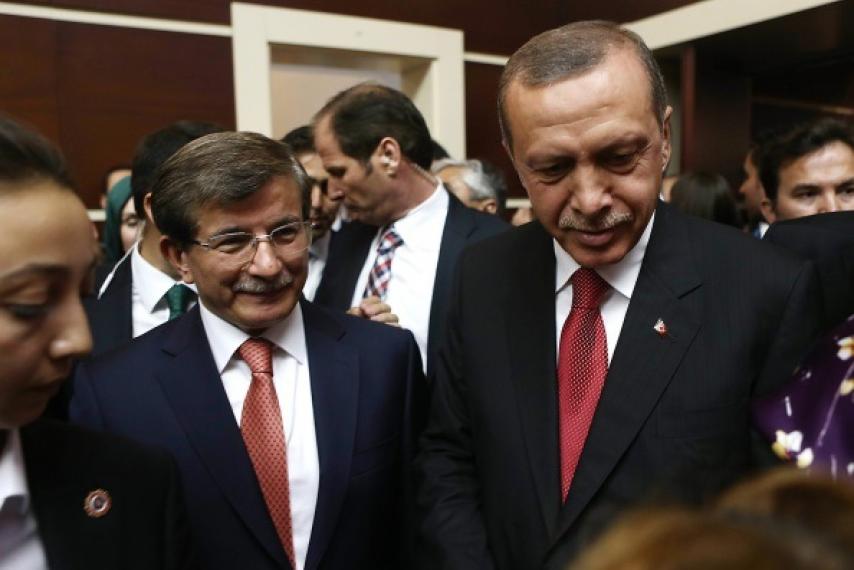 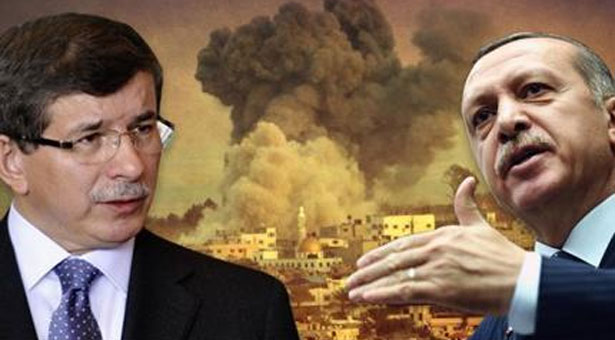 [ Editor’s Note: Martin Berger brings us a concise overview of the split between President Erdogan and his Prime Minister Davutoglu that simmered until Erdo had to make a move with his party’s big convention coming up soon.

With all the problems facing Erdogan, he knew that those from the outside, and inside forces wanting to moderate his centralization behavior, had nowhere to go but to Davutoglu. Now they have no one but Sultan Erdogan.

He is in the process of neutering the Kurdish MP by stripping them of their immunity, so anything they say that is out of line can get them charged with aiding and abetting terrorism. This is the anti-terrorism smokescreen being built by the man who has been funneling fighters and supplies to opposition terrorists inside Syria for some time, and who has used his military against the Kurdish units fighting his terrorists inside Syria.

NATO and the US have been quiet about all of this. They both are members of the “good terrorists and bad terrorists” club, which Russia has refused to join.

Erdogan has a lot of showdowns in play. The EU interior minister has said “no deal” on the visa regime unless Turkey complies with all the requirements, of which it has been well aware for a number of years and never objected to until now. If Kurdish MPs begin to get rounded up, Erdogan could see a full scale war ensue, and one where outsiders might weigh in to assist the Kurds. I fear this could get a hell of a lot worse before it gets better… Jim W. Dean ]

The resignation of Turkish Prime Minister Ahmet Davutoglu and his future successor to be announced at the upcoming congress of the Justice and Development Party (AKP) scheduled for May 22 has been actively discussed by international analysts recently.

Indeed, the announcement that Davutoglu was going to step down did not come as much of a surprise, since his conflict with the Turkish President has been known for a while. The reason for this conflict is pretty simple – power.

Turkey is a parliamentary republic, therefore the position of a president is formal in its nature. There’s little doubt that Erdogan has been reluctant to accept this ever since the day he became the Turkish president. He has not made it a secret that the new draft of the constitution transforms Turkey into a presidential republic.

Davutoglu was “marked” so to speak last April, when he was deprived of the authority to appoint leaders of regional offices of the ruling party, largely due to the fact that he dared to disagree with Erdogan on a large number of issues: the Kurdish question, freedom of speech, the European refugee crisis and so on.

Most media sources agreed that Davutoglu’s resignation is a clear sign of serious differences with Erdogan. The Washington Post would note:

Erdogan occupies what is supposed to be a nonpartisan, ceremonial role in a parliamentary democracy, where Davutoglu, a longstanding ally, was technically the leader. After serving as foreign minister for years while Erdogan was prime minister, Davutoglu became prime minister when Erdogan chose to run for the presidency in 2014. Davutoglu, it was imagined, would be the soft-spoken, bookish vizier to the tough, populist president.

Kiniklioglu, who was once a member of parliament with the AKP, suggests some within the party will interpret Davutoglu’s departure as evidence of Erdogan’s inability to brook dissent, since Davutoglu “after all did not publicly diverge from Erdogan’s discourse.”

In turn, the German Die Welt would stress that what Erdogan is after is a strong state without “Kemalism”, Western welfare without Western values. Thus, he wants to heal Turkey from its “trauma”: the scars left behind by the collapse of the Ottoman Empire.

That is why many experts agree that the bullet that Davutoglu took is a soft revolution. The Economist would note that:

The man who pulled the carpet from under his feet was the same one who appointed him less than two years ago: Turkey’s president, Recep Tayyip Erdogan

In an interview with Hurriyet Daily News, Davutoglu would admit that he was forced to resign even though he was reluctant to do so. Therefore, for the first time in Turkey’s history the Prime Minister resigned, not due to the collapse of the coalition or a vote of no confidence, but due to internal disputes within the ruling party. 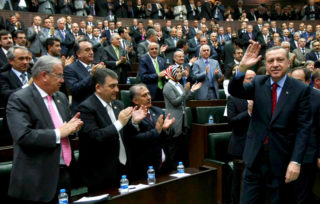 For the first time since the days of Ataturk, the president is deciding who is going to head the Turkish cabinet. Regardless of who is going to occupy this position, the actual head of the government is and will be President Erdogan, who has been pursuing such power for years.

Unlike Erdogan, who grew up in Istanbul’s slums, and learned to claw his way up by trickery and deceit, Davutoglu grew up in a well-educated family.

Over the years he has been employed by the department of international relations at the University of Marmara, and was a visiting professor at Turkish military academies. In 2003, he was presented with the rank of Ambassador Extraordinary and Plenipotentiary.

We must not forget that the Turkish president will never tolerate people with more class or more intelligence around him. It isn’t not a coincidence that Die Welt presented the words of Ulrich Kienzle, who said that Erdogan “is a nutcase.”

That is why Erdogan was carefully and zealously tracking all the steps that Davutoglu was making, along his contacts with Chancellor Merkel and other EU representatives.

In the meantime, he tried to find a replacement that would cement his plans to change the constitution and enable the transition of Turkey into a presidential republic.

The latter is the son-in-law of Erdogan. He was appointed Minister of Energy at a critical moment when, after the downing of Russia’s Su-24, Turkey rushed to look for alternative sources of Russian gas. At the same time, the “favorite son-in-law” promised to cover Erdogan’s son’s illegal oil trade with ISIS.

As for the fate that awaits Davutoglu, he’s more of an intellectual character than a street fighter, so he will directly confront Erdogan only if he has the support of the West. And there’s every reason for the West to provide it. After all, Washington and Brussels have nothing to gain from the rebellious madman holding the position of Turkish president, a position that is becoming stronger by the day.

Davutoglu, in comparison, is considerably more humble, not interested in making a cult out of his personality; and he’s always willing to negotiate. That is why Western leaders are sympathetic with Davutoglu.

One shouldn’t forget that during their visit to Turkey, German Chancellor Angela Merkel and the President of the European Council Donald Tusk met with the Prime Minister, not the President.

Hillary Clinton also strongly supported Davutoglu, and she’s going to visit Turkey soon. In addition, the resignation of Ahmet Davutoglu jeopardizes the implementation of the migration agreement between Brussels and Ankara, notes the Financial Times.

But sympathy – is one thing, and the actual political support – quite another. Erdogan may be controlling the ruling party, but not the state. Turkey is being plunged into political chaos, with the ruling AKP finding itself opposed by both the army and the political opposition, along with 22 million Kurds led by the banned Kurdistan Workers Party (PKK).

In this case, civil conflict could result in the collapse of the Turkish state with the Kurdish areas (the entire South-East Anatolia) breaking away, seeking ways to create an independent Kurdistan that will absorb certain areas in Syria and Iraq, changing the whole balance of power in the Middle East.

In any case, Erdogan’s stubbornness, inability to respect other human beings, dictatorial ambitions and links with ISIS bring Turkey to the brink of political chaos. And he’ll have to answer for this sooner or later. And above all, he must answer to the people of Turkey.