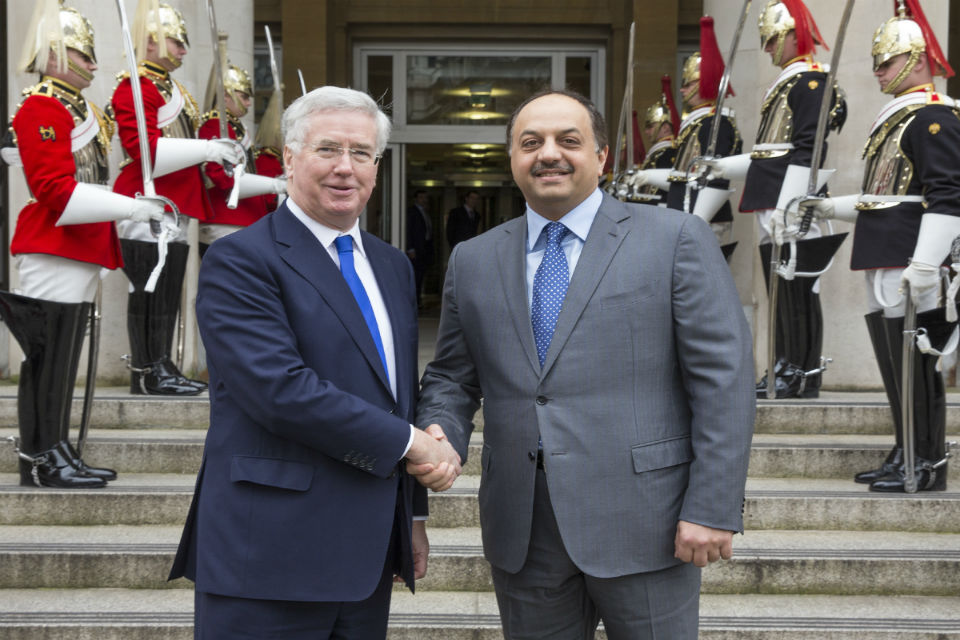 Khalid bin Al Attiyah, the Minister of Foreign Affairs has traveled to London where he signed a joint defense agreement with Michael Fallon, the British Secretary of State for Defense.

In the recent months, Doha expressed its willingness to purchase the advanced Euro fighter Typhoon air fighters. Qatar hosts the headquarters of the United States Central Command in The Middle-East and the Horn of Africa. Paris also commands a small military base in neighboring UAE. Sheikh Tamim Al Thani, the Qatari Emir, in his recent visit to London met with the high-ranking British officials where he signed a treaty of mutual co-operation and security. Doha also agreed during the bilateral talks with the Turkish officials to provide Ankara with an air base in the Persian Gulf.

The silent competition between Qatar from one hand and KSA, UAE from the other hand, rendered these countries as an open field to western armies with the false assumption that western presence shall entail security for the feeble Arab sheikhdoms. With respect to the military items, Doha intends to procure; it sounds Qatari want to further protect themselves against their Saudi and Emirati neighbors.

The passing of Mossad officers through Turkey’s airports

According to a source from the National Intelligence Organization (MİT), the ABV Party Assistant of Bulgaria (Roman Ptko) has announced by his personal Twitter: after the recent secret meeting with the director of the Mossad (Yossi Cohen) and the deputy Minister of Foreign Affairs of Turkey (Synyrly Davutoglu) which was held in Sweden, the passing of Mossad experts through Turkey’s airports has increased “more than ever before” and the most important Israeli officers are extremely anxious about reconstruction of Turkish security.

Seven percent of the increase of MIT in 2016 and the growth of human resources and organizational structure of MIT organization are some of the measures carried out by consultation with the Mossad. Ptko added: of course, the increasing of Turkish security and the decreasing of explosions and bleeding’s in Turkey are the certain results of these actions.