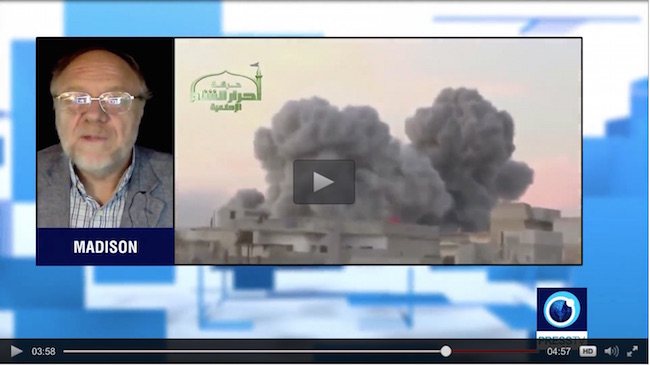 The Saudi royals are a disgrace to Islam – and a disgrace to America, which is propping them up. Yet many Muslims and Americans defer to them, or worse.

One of the greatest joys of exercising what remains of free speech is saying things like “when the Saudis are coming, hide your daughters” on international TV.

“Kissing up to the Saudis” can be a lucrative pastime. Using them as puppets to control global oil pricing and prop up the petrodollar – as the Rothschild bankster cabal does – is even more lucrative.

Now the Saudis seem to be getting out ahead of their imperial backers by threatening to impose their own “military solution” on Syria.

Could that be why we’re seeing a push to “blame the Saudis” for 9/11? The JASTA bill, designed to enable 9/11 victims’ families to sue the Saudis, just passed the Senate. Simultaneously, the movement to release the secret 28 pages of the 9/11 Joint Congressional Inquiry has burst into the mainstream media, and apparently stands a chance of succeeding.

Some JASTA supporters seem to think the Saudis orchestrated 9/11. Others, more sophisticated, hope a 9/11-Saudi witch hunt will blow the case wide open. Still others think the whole brouhaha is a limited hangout to divert attention from the real 9/11 perps – Israel, the top of the US command chain, and the banksters who own both groups.

The truth is that the Saudis WERE involved in 9/11. But it’s even worse than the “evil Saudis support radical Islamic terrorism” crowd thinks.

If the Saudis supported “terrorists” like “al-Qaeda” in order to strike back at the Evil Empire Terrorists who have killed 60 million innocents in dozens of countries in CIA and military interventions since World War II, that would be kind of noble. As people like Chomsky (who I’ll be taking on at the Left Forum in New York this weekend) never tire of reminding us, 9/11 was a relatively tiny crime compared to the murder of 4 million Vietnamese, 1.5 million Indonesians,  8.6 million Iraqis,  7 million Columbians, and on and on.   It would take thousands of 9/11s to even come close to evening the score. And who could blame anyone for trying? (Well, sure, those of us who don’t believe in targeting civilians at all could blame them for doing a tiny fraction of what the Empire does every day…)

But the hideous truth is that the Saudis are on the other side – the side that supports the bankster-driven “American Holocaust” as William Blum calls it. They participated in 9/11 because they were ordered to do so by their bankster-owned US-Zionist masters. And the purpose of 9/11 was to launch a 100-years-war-on-Islam-for-Israel, while strengthening all the other forces of evil and repression worldwide.

Is  there, anywhere on earth, a more sickeningly salacious assortment of insatiably sycophantic, swinish scumbags than the Saudis? If so, please tell me where, so I can avoid that place like the proverbial plague.

The following is a rough transcription of the interview.

Press TV: What has emboldened Riyadh to think that it is fit to choose and dictate leaders of other countries other than itself in the Middle East?

Barrett: It is interesting, isn’t it? We are seeing a resurgence of Saudi aggression in several areas. They are invading and occupying their neighbors as happened in Bahrain, they are utterly destroying their neighbors as it is happening in Yemen with the help of US and British and Israeli advisors and weapons, they are destroying Yemen and now they are threatening to go after Syria  militarily and try to impose a Saudi solution in Syria.

I think this is a case of serious overreach by the Saudi leadership. They are in precarious straits right now, oil prices have been pushed way down as a geostrategic move that has been dictated by the American, Zionist imperial plunge protection team that really controls oil prices and basically owns …, the Saudis are dead.

Now the Saudis are getting ahead from the empire and pushing for this extremely aggressive new series of policies and you have to ask yourself why is this. They claim they are for democracy, the Saudis are for democracy, this is the most totalitarian, dictatorial, authoritarian system anywhere and yet they pretend that they support democracy in places like Yemen and Syria. This is so ludicrous and it is happening on the eve of a movement in the United States to hold the Saudis accountable for their role in 9/11 which could have very severe repercussions for the US-Saudi relationship.

So it is a real powder keg right now and when the Saudis are threatening to impose a military solution in Syria that we are not hearing that from anybody else, the least of all the Americans, it really makes you wonder what is going on.

Press TV: You mentioned they want to install the so-called democracy in Syria or Yemen when they do not have one at home. How would Riyadh react if another country was to try to put a democracy in Saudi Arabia or oust the Saudi King?

Barrett: Well, obviously they would not be very happy about that. But I think  the real reason they are so aggressive elsewhere is to try to divert attention from their failings at home. Many of the people of Arabia would love a more democratic system, they would love a system that takes good care of the oil wealth of the Arabian Peninsula and uses it for its own people and for the people of the region and for the people of the Islamic Ummah rather than squandering their oil wealth and gambling junkets all over the world … These are the most degenerate, sybaritic, excessive over the top extreme people in the world. When they show up in Morocco for example, the country I have lived in, everybody runs and hides their daughters.

These are the people who call themselves the custodians of the Islamic holy places, and they are the least holy people in the whole Islamic world. Now they are invading their neighbors and threatening to invade Syria on top of their invasions of Yemen and Bahrain.  It has really gotten to the point that I think that the Islamic world is going to have to say, look, we have a bunch of gangsters who are out of control in charge of our holy places, they are occupying the holy places just as brutally as the Israelis are occupying Islamically-administered, historically Islamic holy places. This is not acceptable.

Barrett: Well, nobody thinks [so]. It is really strange the US supports just about everything the Saudi royals do. I suppose it is because there is a sort of a codependent relationship in which the Saudi oil props up the Rothschild petrodollar that has been the world reserve currency since Nixon left the Gold Standard around 1970.

So the Saudis, they have trillions of wealth, hundreds of billions, maybe a couple of trillion in US securities propping up the American economy and the US is dependent on their control of the Saudis to essentially run the world’s oil supply and everybody is afraid to shake up the system.

But even the people here in the US who realize that they need to keep doing this are scratching their heads and appalled at the way the Saudis run their country. There is really nobody in the world who has any use for the way they run their country, including a large segment of the population of Saudi Arabia. So there is change coming to that kingdom, and are they trying to stave it off through these crazy aggressive antics. The world needs to say no.