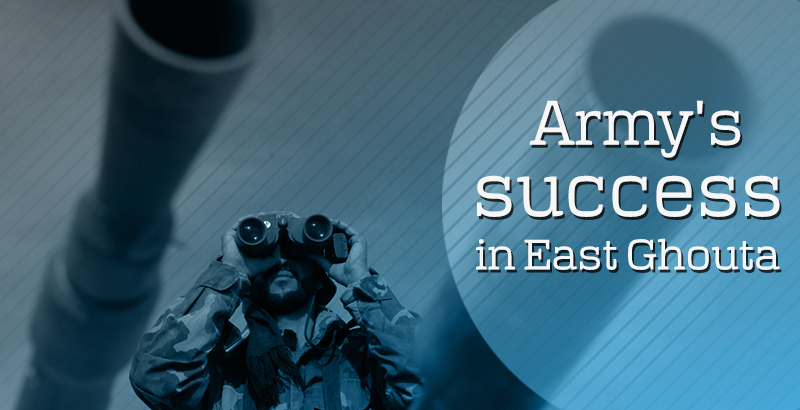 The Syrian Arab Army and its allies successfully purged the southern part of Damascus’ East Ghouta from militants. On May 18, Syrian forces liberated the village of Bazyna and cut off the supply line to Dayr al-Asafir. On May 19, the Syrian army liberated Dayr al-Asafir, Zebdeen, Harasta Qantarah and the surrounding areas. Now, the loyalists are making efforts to secure and demine the liberated areas. Сontradictory reports argue that sporadic clashes could still be observed in Harasta Qantarah.

Over two months of infighting among the militant groups of Jeish al-Salam, Faylaq al-Rahman and Jeish al-Fostat, which has left over 500 terrorists dead, played an important role of the SAA’s success. Only in past few days, some 50 militants were killed in infighting.

Meanwhile, the pro-government forces engaged in clashes against al Nusra militants in the town of Khan al-Sheikh in Western Ghouta. The clashes followed the liberation of the al-Salam highway which links Damascus to the Quneitra province. SAA troops also seized back several blocks on the way towards Khan al-Sheikh’s pharmaceutical plant.

Russian planes have delivered 38.2 tons of humanitarian aid in Syria’s city of Deir Ezzor, besieged by ISIS militants. According to the website of the Russian Ministry of Defense, 20.8 tons of the humanitarian cargos have been dropped with usage of Russian parachute systems, 17.3 tons of cargos – by American ones. Food products and corns were the basis of the cargos.