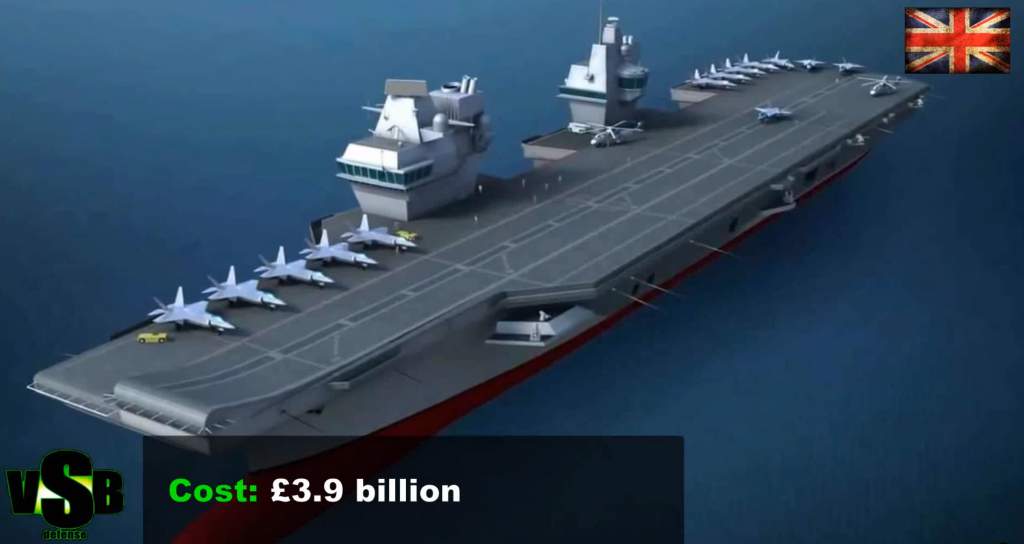 HMS Queen Elizabeth, the first of two massive aircraft carriers, is approaching completion ahead of her first sea trials in 2017. However the project remains mired in controversy.

The Queen Elizabeth will move from her berth at Rosyth in the Firth of Forth to her home port of Portsmouth in the near future. She will become the Royal Navy’s flagship and will soon be joined on the high seas by her sister ship, the Prince of Wales.

Captain Simon Petitt RN told the Telegraph Friday the ships would become the UK’s most potent weapon after the Trident nuclear deterrent and revolutionize the way Britain fights its wars.

“It is about stopping wars rather than starting them,” he insisted.

“If someone does want to start a war I think they might think twice if they see one of these ships coming over the horizon.”

“We have never seen these ships before. It will change the way the Navy does its business,” Petitt added.

If accurately represented, the ability of the 65,000-tonne Queen Elizabeth to project force around the world in support of UK foreign policy are staggering. 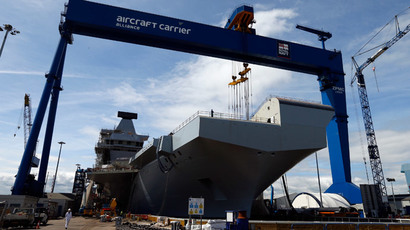 She stands higher than Niagara Falls at 56 meters, can accommodate four passenger jets side-by-side on her 70-meter-wide deck and, at 280 meters in length, it is longer than the Houses of Parliament, whose global ambitions she will serve.

It is claimed 108 combat flights can be flown from her deck per day and besides her 700-strong crew she can accommodate a further 900 air crew and Royal Marine Commandos.

The carrier, it is claimed, can hold up to 36 F35 fighter jets and four Merlin helicopters, though these could be switched for Apaches attack helicopters or Chinook transport choppers.

Petitt said Queen Elizabeth would be supremely adaptable, using the examples of very different wars to illustrate his point.

In the Gulf War carriers projected air power over Iraq from great distance, in Sierra Leone commandos were put ashore in an amphibious operations and in Libya Apache choppers were flown from a ship’s deck, he said.

“We can do that. It’s all about flexibility, all about lots of different missions, that’s what the carrier offers.”

But it hasn’t all been plain sailing for the carrier project, which some have hailed the creation of a national icon and way for UK power projection to pack a massive punch.

The project has rocketed in price from the £3.5 billion (US$5.1 billion) projected by the Labour government in 2007 to an expected £6.2 billion under the Tories.

In 2015, one senior military figure told the Guardian anonymously the carrier program is a toxic “combination of naval vanity and pork-barrel politics.”

His claim echoes a common suggestion in defense circles that the new carriers are part of a desperate struggle by the Royal Navy to stay relevant in an era when spies, cyberwarfare, drones and Special Forces are favored over the hulking maritime hardware of yesteryear.

The same individual also warned building carriers is “moving in the direction absolutely contrary to strategic developments of our time.”

Big shipping, he said, has an obvious radar signature and would be increasingly vulnerable to missile attacks.

Another issue stems from the availability of fighter jets for the second aircraft carrier to carry.

The Ministry of Defence (MoD) has reportedly ordered a mere 14 F-35B’s at an estimated cost of £2 billion.

A 2015 report by the Commons Defence Select Committee warned it makes “little sense to maintain an additional aircraft carrier without aircraft to fly off it and the necessary aircraft, surface ships and submarines to protect it.”

This may lead to the military relying on US warplanes to man its own carrier, potentially leading to issues of sovereignty like those which may emerge from the controversial EU army project.