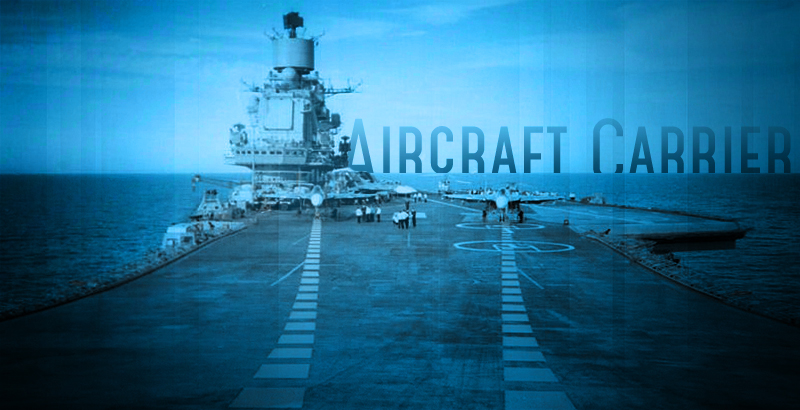 Aircraft carriers have assumed the role of naval capital ships during World War 2 and have not relinquished it since. Their importance is such that all navies can be divided into two kinds: those with aircraft carriers and those without, with other major surface ships being essentially reduced to the role of escorts for the carriers. Since their combat power resides chiefly in their air component, aircraft carriers are very flexible combat units, and even old ships can remain modern as long as they can operate newer aircraft designs.

Since the 1970s, Russia has been one of the navies which has operated vessels carrying fixed-wing aircraft, starting with the four Kiev-class aircraft-carrying cruisers. However, their main armament was the powerful battery of 12 long-range Bazalt anti-ship missiles, while the 12 Yak-36 vertical take-off fighters played a supporting role. Unlike the US aircraft carriers, the Soviet ships were primarily defensive in nature, as their mission consisted largely of keeping NATO carrier battlegroups, with their nuclear cruise-missile carrying warships, away from USSR’s shores.

The Admiral of the Fleet Kuznetsov is a linear successor to the Kievs. At 55 thousand tons full load, it is little more than half the displacement of US supercarriers, and its aircraft capacity of about 40 fixed-wing aircraft is also much smaller than that of the US ships. It makes up for it by carrying 12 Granit anti-ship missiles, which it would use in concert with other heavy missile-carrying platforms, such as Tu-22M bombers, Kirov and Slava cruisers, and Atlant submarines, against NATO carrier groups. Its aircraft were also intended primarily as a defensive weapon, to protect own ships against NATO air attack rather than to launch attacks against surface targets. The Admiral Kuznetsov also carries a massive battery of short-range Kinzhal and Kortik anti-aircraft and anti-missile systems, in addition to active and passive torpedo countermeasures that make it one of the best-defended ships in the world.

While effective in its intended role, the Kuznetsov’s design, which includes no catapults but only a forward ramp for launching aircraft, significantly limits the effectiveness of its Su-33 fighters. As a result the 14 Su-33s that are permanently assigned can only carry air-to-air missiles. Though the fighters can carry bombs and missiles, including the air-launched Moskit supersonic anti-ship missile, as well as extra fuel tanks and other stores, they could not take off from the ship using the ramp with such a heavy load. The Kuznetsov also cannot carry heavier fixed-wing aircraft such as airborne early warning aircraft needed for beyond-the-horizon radar coverage.

The two-stage modernization and upgrade program for the Kuznetsov is the result of Russian Navy’s awareness of these shortcomings and desire to rectify them. The Russian Navy procured 20 Mig-29K multi-role fighters for use on the carrier. The much lighter MiG has the advantage over the Su-33K as it can effect a ramp take-off with a respectable air-to-ground payload. The new naval fighter regiment is currently training using their new aircraft on land-based carrier deck simulators and will be based on the Kuznetsov starting with July 2016. Admiral Kuznetsov will then carry out a training cruise off the coast of Syria, where its MiG-29K fighters will likely participate in launching airstrikes against the militants in Syria, though the currently very fluid international situation does not preclude it being used against ISIS in Libya at the behest of the Libyan government.

However, after the Syria cruise, the Kuznetsov will undergo the second and much more extensive phase of its modernization. Its Granit battery will be removed, though it has not yet been reported what it will be replaced with–newer missiles such as the Oniks or Kalibr, or more hangar space for its fighters. The fact that the Russian Navy is willing to dedicate considerable resources to the Kuznetsov indicates that it is in the carrier game for the long term, and that it is already looking to its successor. The experience of operating this carrier in the upcoming years will no doubt clarify the navy’s thinking concerning what kind of carrier it desires, and it is unlikely its successor will be similar to it. It will most likely be a fully-fledged aircraft carrier with catapults and nuclear propulsion in order to operate a full range of aircraft and fully exploit their capabilities.