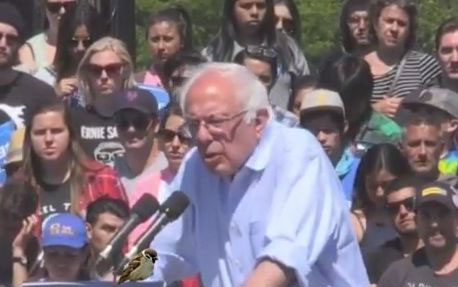 Thousands of Bernie supporters lined up for a campaign rally in Vista, CA. Vista is a small town about 40 miles north of San Diego, CA. His speech at Ranch Buena Vista High School drew a huge crowd of all ages with the largest group being young people in their 20’s and 30’s.

“Are we going to tell the Super Pacs that we want a democracy, not a political system bought by billionaires?” he asked.

“This campaign is going to win because we are doing something very unusual in American campaign politics, we are telling the truth. … We are dealing with the harsh realities of American life.”

“One of those realities is that we have a corrupt campaign finance system which is undermining American democracy. The concept of democracy is not difficult to understand, it means one person, one vote. Democracy is not about Super Pacs and the billionaires that fund those Super Pacs buying elections.”

“Our job is to create a vibrant democracy where we have one of the highest voter turn out rates and not one of the lowest.”

“Democracy is not a spectator sport,” he said. “Democracy means that every person here has enormous power if he or she is prepared to exercise that power. Democracy is about American citizens standing up and demanding justice (pause) and demanding that all of our people receive the kind of help and support they need to live dignified and respectable lives.”

Sanders has won 20 state primaries and is seeking to win the vote in the California Primary on June 7. Currently, he has 46% of the pledged Democratic delegates. Sanders is hoping to have 50% of the pledged delegates after the upcoming primaries including the largest, the California Primary. State after state he has won the overwhelming percentage of young people’s votes.

“Donald Trump must not become President of the United States, “ he said, as he referred to Trump’s insults to Latinos, Muslims, people of color and women.

“The job of the President is to bring people together, not to divide us up,” he said. “In virtually every national poll and every state poll we defeat Trump by larger numbers than does Secretary Clinton”

His speech delivered a focus on the issues that were important to his supporters including Medicare for all, offering people the ability to refinance their student loans, obtain a free state college education paid for by taxing Wall Street transactions, increasing the minimum wage to $15 per hour, addressing Climate Change and the fossil fuel lobby, ending private prisons, decriminalizing marijuana, creating infrastructure jobs and restoring manufacturing in the US.

He said that an estimated 600,000 factories closed and/or were moved overseas after 2001 because of trade agreements including NAFTA, CAFTA, etc. He also addressed the fact that the US has the most people in prisons of any country globally, even more than China that is more than three times the size of the US and which does not view dissent favorably.

Sanders also spoke of police reform saying that the average police officer is honest and has a very difficult job, “but, like any other public official, if a police officer breaks the law that officer must be held accountable.

“We have to de-militarize local police departments, so that they do not look like occupying armies” and create a culture in law enforcement where, “lethal force is the last response not the first response.”

Absent was any mention on foreign policy. The closest he came was discussing the Iraq war vote briefly. Not a word on Syria, the Middle East, and not a peep about terrorism or anything global.

There was also nothing mentioned regarding the Military Industrial Complex spending.

It was strictly national, populist issues for Sanders, whose main focus was on the election including the influence of Super Pacs, education, jobs and the economy.

“We want a democracy not a political system bought by billionaires,” he said.“It is about a rigged economy.

“In America anyone who works 40 hours a week should not be living in poverty,” said Sanders who also pointed out that the top 20 wealthiest people own more than the bottom 150 million Americans.

He also named the Walton family, who owns more wealth than the bottom 42% of the US, and who’s workers at Walmart are paid low wages. “It is a bit absurd for working class families to have supplement the wages of workers” paid by Walmart.

The focus on jobs is key to Sanders’ plan, as he is proposing infrastructure jobs to repair the nation’s bridges, railways, etc.

“We can create 13 million jobs by rebuilding our infrastructure and making this country safer,” he said.

While the Democratic establishment has seemingly snubbed Sanders, as party insiders in the past have even called on him to drop out, California’s primary holds 475 delegates and 40 alternatives to the Philadelphia, PA convention that will take place on July 25-28.

“If we can win big here, we are going to have the momentum taking us into the Democratic Convention, and if we win there, I can assure you Donald Trump will not become the next President.”

Sanders stated vision is to leave the planet as being “happy and healthy.” He also added, “As human beings we are part of nature and we must live with nature, and that if we destroy nature, we are destroying ourselves.”

Perhaps he did not need to mention foreign policy. The way he would treat people and our environment as Commander in Chief is clearly stated in his words. Still, it would have been nice to have his take on what he intends to do to restore our role diplomatically in the world. I guess that’s just not that important to most Americans.