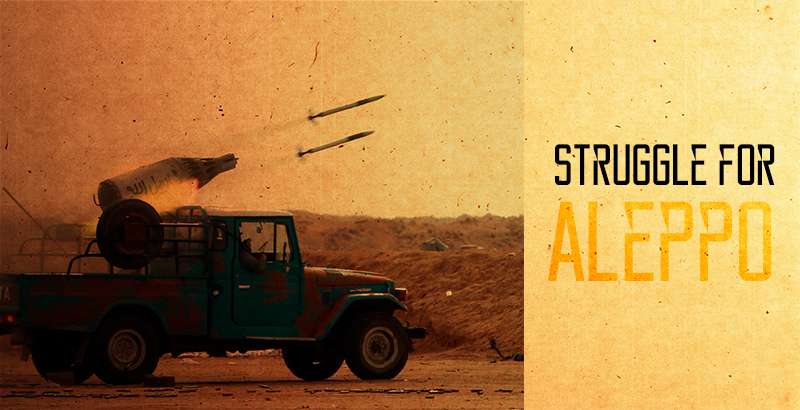 The operation of the Syrian government forces in the Aleppo city is facing a real challenge. A critical moment in the activity of the loyalists was the fall of the town of Khan Touman that has been seized by Al Nusra and the group’s allies. Iranians took major casualties in the clashes there. Meanwhile, Palestinian militias failed to cut the militants’ supply lines in the area of Handarat. The source of this situation isn’t a secret. It’s a low level of the staff planning exercise and tactics of the Syrian Arab Army (SAA) and the Army of the Guardians of the Islamic Revolution (IRGC). For example, to rely only on irregular military formations in the atempt to cut off the supply lines of the militants near Aleppo is a major mistake.

Describing this operation, Western experts argue some difficulties between Moscow and Teheran. According to them, Iran is pushing a military solution of the Syrian crisis, while Russia is supporting the international diplomatic efforts as the only successful way. Iranian forces are also dissatisfied by the low level of the Russian air support at Khan Touman, ignoring bad weather conditions at that time. SouthFront doesn’t support the radical views of the Western experts because the ongoing diplomatic efforts don’t exclude the ability to conduct military operations against the sides, excluded from the ceasefire. However, the recent developments have shown clearly that the IRGC isn’t able to independent offensive or defensive operations without the Russian air support and let’s be clear without Russian military strategists.

The very same time, SouthFront can’t confirm the rumors, launched by the Western media that Hezbollah units are to be re-deployed from Aleppo to the Syrian-Lebanon border and the Shia group is decreasing its involvement in the conflict. This misinformation has arisen from the fact that some Hezbollah units have been sent from Aleppo to Daraa and Homs where the situation is acute, recently. The death of Mustafa Badreddine changes nothing in Hezbollah’s approach in Syria. The group will participate in the conflict as long as it‘s needed for its main foreign sponsor, Iran. The problem is the IRGC, Hezbollah and the SAA aren’t able to deal a devastating blow to the terrorists in the country because of a low level of the officers’ qualification. The solution of the problem could be the recognition of the leading role of the Russian command staff in planning and coordination of the ongoing operations. If Teheran isn’t ready to do this because of some reasons, we all will continue to observe heavy loses of the loyalists in hardly successful attempts to develop the moment against terrorists.

Iran has always had an image of a hard-nosed negotiator and a skittish ally. The rigid conformity to this approach with the only allied world power could easily undermine Teheran’s claims to the regional leadership.