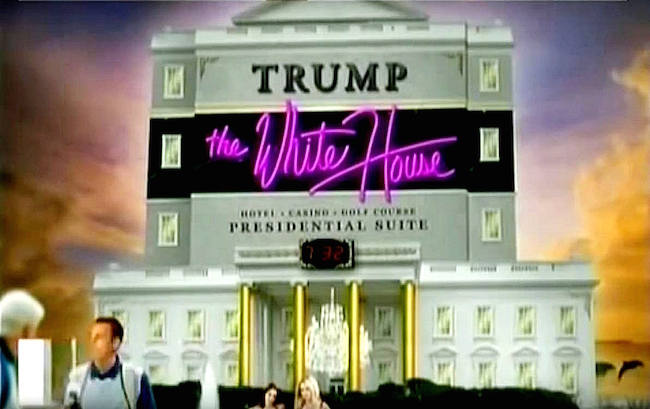 “Instead of ‘Make America Great Again,’ I have coined the new slogan ‘Make America Trump Again,’” Trump told a screaming crowd of supporters in Modesto, California.

Trump announced that if elected he will change the name of the United States of America to the United States of Trump. Later in the speech he contradicted himself, saying America’s official new name will be Trump Nation. Two sentences later, he changed the name again, this time to “Trumpy America” : “If the Saud family can be Saudi Arabia, Donald Trump can be Trumpy America. After all, I’m almost as rich and decadent as they are.”

Trump also unveiled the long-awaited details of his plan to rebuild Trumpy America’s infrastructure, announcing that he would re-name every skyscraper Trump Tower. “One Trump Tower just isn’t enough. What if ISIS blew it up? Where would we be then? If they destroyed Trumpy America’s only official phallic symbol, that would be a huge victory for the terrorists.”

Reminded that George Washington also has a towering phallic monument in Washington DC, a visibly annoyed Trump snapped, “George who?”

Trump explained that as part of his infrastructure renewal package, he would build huge walls around all of the newly-renamed Trump Towers to keep illegal immigrants and Muslims out. “We estimate that at least fifty million new jobs would be created in the construction industry building all those walls,” Trump said. “And the best part is, I will make Hillary Clinton pay for constructing those walls. It won’t cost the American people one red cent.”

When asked by a reporter how the people who work in all those Trump Towers could get to their jobs, Trump responded that his friends Sheldon Adelson and Bibi Netanyahu would help make sure the walls were pierced with checkpoints.

Trump added that if elected he planned to junk Air Force One and make Jeffrey Epstein’s “Lolita Express” Lear Jet the new official Presidential Airliner. “And if Bill Clinton endorses me, I’ll let him fly on it as much as he wants,” Trump added, in a move calculated to annoy his likely Democratic opponent.

Hillary Clinton’s response: “I simply cannot believe that the American people are going to elect an egomaniacal narcissistic psychopath as their president…er, at least, not that one.”